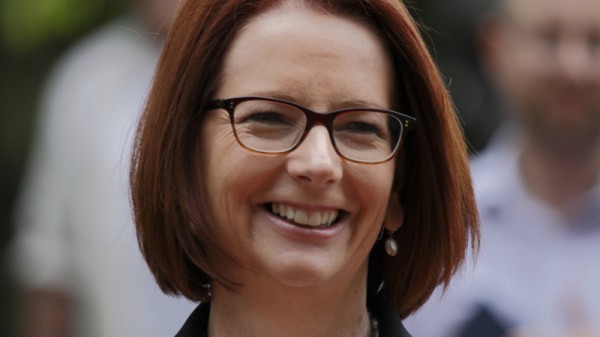 Australians are being conned into thinking the country is taking serious action to address climate change, according to former prime minister Julia Gillard.

She warns that climate politics in Canberra “will get worse before they get better”, but predicts “emissions trading will be part of our nation’s future.”

And she accuses Kevin Rudd, her predecessor and successor as Labour leader and PM, of blowing the country’s best chance of a coherent climate strategy.

She argues he has misled the public over the potential of his Direct Action Plan to curb emissions, built around a AU$2.55 billion fund which pays businesses to cut pollution.

“He started the con job on the Australian people that tackling climate change and meaningfully reducing carbon emissions could be done at no real cost through measures such as tree planting,” Gillard writes.

Under Abbott’s leadership, “the opposition went from divided but mostly rational on carbon pricing to united and irrational almost overnight”.

Branding the willful disregard of climate science by the Abbott government as “ridiculous”, she says “sensible conduct has been overwhelmed by the campaigning of eccentrics”.

Gillard devotes 41 pages to climate politics in a chapter titled “Our atmosphere”, focusing on the ill-fated deployment of the carbon tax or emissions trading scheme (ETS).

The debacle ultimately cost her the leadership.

Quickly branded a “tax” by Abbott, the now repealed legislation and its effects on living standards became the centrepiece of a brutal election campaign in 2013, which Gillard says was marked out by “general and sexist abuse”.

Gillard mounts a staunch defence of the ETS, which she says cut emissions from power generation 6% in the first 12 months without a significant impact on the cost of living.

But she admits that her government failed to properly explain to the public how it would work and what its effects could be – a gap quickly filled by Abbott who said it was making ordinary people poorer.

“One of the biggest problems with carbon pricing was the lack of explanation and engagement with the wider community,” she writes.

The collapse of European carbon prices after the Eurozone crisis “made the political task of selling our ETS harder” she says, adding later she remains convinced a future Australia government will see the value of carbon markets.

Gillard says the brutal experience of the failed UN climate summit in Copenhagen in 2009 scarred Kevin Rudd, who had flown to the Danish capital confident of a global agreement.

The high profile meeting ended in farcical scenes, with a small group of leading economies crafting a text that loosely committed countries to voluntary carbon cuts.

“When Kevin returned… he was physically exhausted and broken in spirit,” she says.

The lack of any deal made him nervous over future carbon regulations and caused him to backtrack on plans for an ETS in 2010, she says. This “increased uncertainty” over climate laws, and it fell to Gillard to pick up the pieces when she took over that year.

Rudd regained his role as prime minister in 2013 after a party coup.

In an email to one of her advisors, former UK government minister Alan Milburn, Gillard accuses Rudd of using climate policy to split support for her within Labour.

“Kevin’s malice knows no bounds… the last week has been particularly diabolical with him deliberately setting up a narrative on carbon pricing that he is honest, I am not,” she writes.

Despite moves by the Abbott government to slash the ETS and obstruct UN climate talks, Gillard does not believe Australia will remain a global climate pariah for long, largely due to pressure from younger voters.

The country has an unconditional commitment to cut carbon 5% on 2000 levels by 2020. It is unclear if existing policies will be enough meet this goal, which is low compared to other developed countries.

Last year it earned AU$39.8bn from coal sales, its second largest export after iron ore. The Bureau of Resources and Energy Economics expects Australian coal production to expand 3% a year by 2018.

But arguing Australia has an “obligation” to cut carbon, Gillard says an internationally linked ETS will be the cheapest way to reduce emissions in the face of the “real” threat of climate change.

“Emissions trading will be a part of our nation’s future, it is inevitable,” she writes.

“I will enjoy living to see the day when I can have conversations with young people about putting a price on carbon where they will look at me with wonderment in their eyes.

“’Was anybody really ever opposed?’ they will say.  And I will smile and say, ‘Let me tell you about the old days’.”