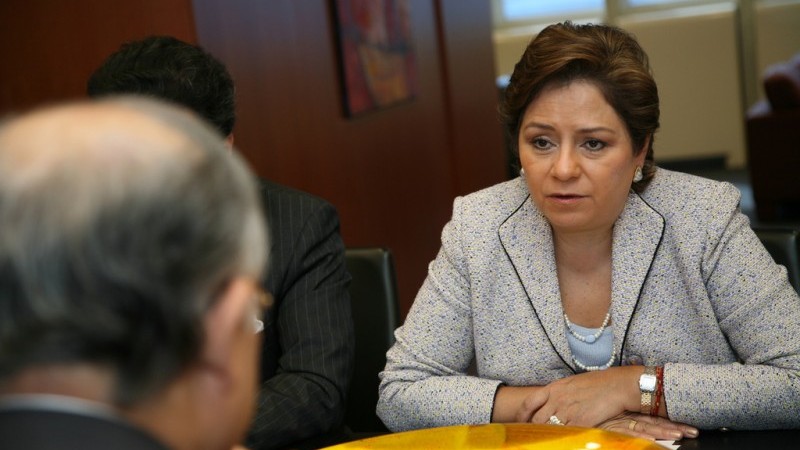 The UN has selected Patricia Espinosa as the next head of its climate change body.

Mexico’s ambassador to Germany will take over from Christiana Figueres when she leaves on 6 July, after two terms leading the UN Framework Convention on Climate Change (UNFCCC).

Figueres broke the news – which is subject to approval by the Bureau – on twitter on Tuesday morning.

Espinosa is known in climate circles for taking over the presidency of talks in 2010, after the Copenhagen summit collapsed.

Now that a UN climate deal has been agreed, her role will be to negotiate the rulebook and put it into action, together with governments.

The position, paying around US$200,000, has been upgraded to under-secretary general.

Yet there is unlikely to be extra funding for the institution, which employs around 500 people, Figueres told Climate Home.

Speaking before the successful candidate had been named, Figueres said they would be “facing up to many new responsibilities with a flat budget”.

Congratulation to Patricia! A powerful woman for an exciting and challenging period .@PEspinosaC #ParisAgreement https://t.co/676v3AnIpH

Liz Gallagher, director of the Climate Briefing Service, said if confirmed, “it will be fantastic to have such a competent and experienced candidate selected”.

Espinosa was “instrumental in picking up the pieces from Copenhagen and charting the course for the agreement in Paris” and “distinguished” in foreign affairs.

“The UNFCCC won’t be the same without Christiana Figueres but as we enter into a new chapter it is fantastic to have fresh blood in the talks.”

While it has yet to be formally announced, Solheim is expected to replace Achim Steiner next month.