China cranks up pressure on G20, calling on all major economies to ratify agreement ahead of September’s meeting 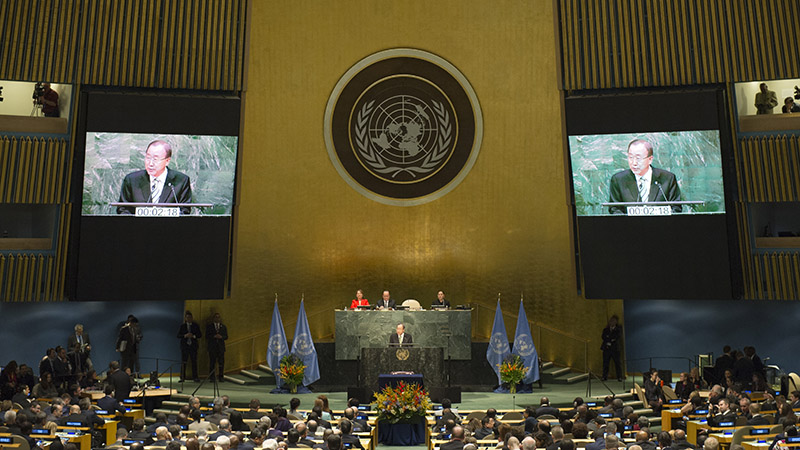 The strong show of support for a deal to end the era of fossil fuels was welcomed by an emotional UN secretary general Ban Ki-moon, who urged countries to accelerate their climate plans.

France president Francois Hollande described the signing as “more than a commitment”, promising that his government would see the deal ratified before summer.

On a day full of symbolism, it was China’s call for countries to formally approve the deal within months that underlined Beijing’s desire to be seen as leader in this issue.

Vice premier Zhang Gaoli outlined plans for a greenhouse gas emissions peak earlier than its 2030 target, and urged other major economies to join the agreement this year.

“I think the China announcement about the timing of them formally joining was pretty big,” said Jake Schmidt, head of international climate policy at the National Resources Defense Council NGO.

“That is a pretty clear deadline and will make other G20 countries feel uncomfortable if they haven’t formally joined by the time they show up in China.”

So sweet. Sec. of State John Kerry signs #ParisAgreement with granddaughter on his lap @UN (by Spencer Platt/Getty) pic.twitter.com/F7PVoi1KyD

US secretary of state John Kerry, who signed the deal with his granddaughter perched on his lap, said the administration “looks forward to joining” this year, likely via a presidential decree.

France would be a “role model” said Hollande, who said he would reveal plans for a higher price on carbon this Monday, talking of a “path” to 100 Euros a tonne.

Two billion Euros on top of an existing 3 billion would be allocated towards climate projects in developing countries, he said, while a new financial transaction tax will raise 1 billion to fight desertification.

What is the Paris Agreement?
-Supported by 195 countries last December in Paris, the deal commits countries to limit global warming to well below 2C above pre-industrial levels, with an aspirational new goal of 1.5C
-Governments agreed to slash their use of fossil fuels to the extent that humans release ‘net zero’ emissions by the second half of the century

Children formed a recurring theme to the day, with 16-year-old Gertrude Clement from Tanzania opening the summit with a reminder of what extreme weather was doing to Africa.

“As young people, the future is ours, but this is not the future we want for ourselves,” she said.

It was a topic Canada’s youthful prime minister Justin Trudeau, who confirmed his government would deliver C$2.5 billion of climate finance by 2020, returned to later in the day.

“Our children and our children’s children are counting on us to get this right and we will not let them down,” he said.

Hailed as a diplomatic triumph, the 175 countries who signed in one day makes this a record for the UN, beating the 119 that backed the UN Law of the Sea in 1982.

It was a defining moment to sign on behalf of India#[email protected] @PMOIndia pic.twitter.com/RB2YUTkQBC

But in a year likely to set another heat record, with concentrations of carbon dioxide in the  atmosphere at new highs, few were quick to proclaim victory.

“It is no accident that island nations have moved so expeditiously to ratify. Fiji, The Republic of the Marshall Islands, Palau and Maldives were the first to do so,” said Thoriq Ibrahim, minister of environment and energy for the Maldives.

“As the communities on the frontlines on the climate crisis, we are acutely aware that there is no time to waste for us to cut greenhouse gas emissions and adapt to impacts that can no longer be avoided.”

Without aggressive curbs on carbon greater than those currently proposed, the world can expect conflict, migration and terror to spread, said Tosi Mpanu-Mpanu from the DR Congo, head of the Least Developed Countries group at UN talks.

“If you have seen Syrian refugees, get ready to see climate refugees – it will be worse,” he told the BBC.

And without greater levels of climate finance, poorer countries will be unable to defend themselves against projected severe weather events linked to climate change, said Harjeet Singh from development agency ActionAid.

“What we need now is clear milestones on how rich nations will raise the $100 billion they promised, as well as ambitious roadmaps from all countries to show they are taking practical steps to address the crisis,” he said.

“It won’t be easy, we will have to set higher targets, new and higher regulations,” said EU climate chief Miguel Arias Canete, who faces a challenge coralling all 28 member states into approving the deal.

“We are spending trillions… it’s not about a lack of money. Climate change is happening because we spent money in a wrong way,” he said.

Amid the applause, smiles and relentless positivity, some noted the absence of nearly 20 countries from the signing ceremony; including Saudi Arabia, Qatar and Nicaragua.

“One has to wonder why there are some countries that did not attend the meeting or did not sign yet,” said UN climate chief Christiana Figueres, who leaves her post in July.