Top US attorneys step up probe into oil major ‘fraud’ 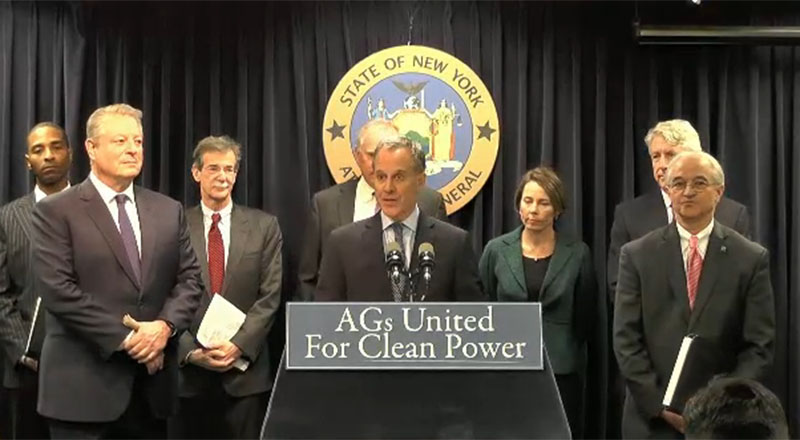 US oil and gas majors face investigation from 17 attorney generals into claims they misled the public over the impacts of climate change.

In a Tuesday press conference New York State lead attorney Eric Schneiderman described the coalition as “unprecedented” and promised to pursue any company that had broken the law.

“This is a first of its time. We are exploring creative ways to enforce laws being flouted by fossil fuel institutions which are putting profits above people,” he said.

“We have heard the scientists. We know what’s happening. There is no dispute but there is confusion – sowed by those who are profiting by confusion.”

Schneiderman described the scope and size of the enforcement project as “massive”, requiring a multi-state effort targeting what he referred to as “fraud”.

“We hope this will be the beginning of the end to our addiction to fossil fuel,” he said.

Four attorneys said they would direct their energies at Exxon-Mobil, which stands accused of deliberately hiding research from as far back as 1977 linking the burning of oil to global warming.

Inside Climate News: Exxon – The Road Not Taken

In the past four months Schneiderman and his Californian colleague Kamala Harris have subpoenaed Exxon demanding financial records, letters and emails linked to climate change.

Maryland attorney general Brian Frosh called on Exxon, coal giant Peabody Energy and top oil lobby group ALEC to “tell the truth so we can get down to the business of stopping climate change”.

“It appears many industries may not have told the whole story. Fossil fuel companies deceived investors. They should be, must be held accountable,” added Massachusetts’ Maura Healey.

Last week the Rockefeller Foundation announced it was withdrawing all funds from oil, gas and coal holdings, accusing Exxon of “morally reprehensible conduct”.

25 years later: When the world united against climate change

In a statement posted on its website, Suzanne McCarron, Exxon Mobil vice president of public and government affairs said the company was “actively assessing all legal options.”

“The allegations repeated today are an attempt to limit free speech and are the antithesis of scientific inquiry,” she said.

“Left unchallenged, they could stifle the search for solutions to the real risks from climate change.”

Exxon has long been accused of funding research institutions and think tanks to discredit climate science and block greenhouse gas cutting policies in the US.

In the early 1990s it helped found the Global Climate Coalition, which actively lobbied at UN climate talks to stymie efforts to develop an international treaty to curb emissions.

Former US vice president Al Gore, a veteran climate campaigner who was in New York to support to legal challenge, said it would be a “turning point” in moves to address global warming.

Fossil fuel groups had long tried to “jigger with the laws” through lobbying of Congress he said, part of a wider effort to block White House plans to deliver a domestic climate plan.

“Every night on news it’s like a nature hike through the book of revelation,” Gore added in reference to news 2016 would likely be the hottest year since records began.