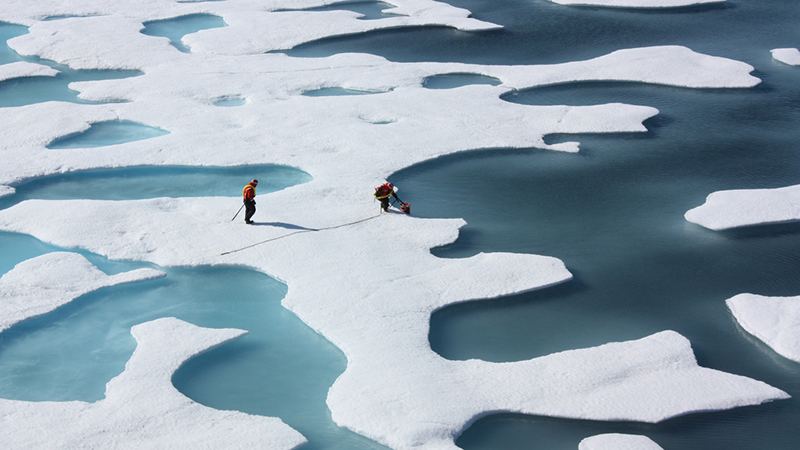 NASA scientists in 2011 researching how changing conditions in the Arctic affect the ocean’s chemistry and ecosystems (Credit: NASA/Kathryn Hansen)

Arctic sea ice fell to its lowest winter extent in recorded history for a second straight year, according to scientists at the National Snow and Ice Data Center and NASA.

Ice cover in the polar region averaged 14.52 million square kilometres (5.607 m sq miles) on March 24, the US science agencies said in a statement on Monday.

Arctic sea ice appears to have reached a record low wintertime maximum for 2nd year in a row https://t.co/L2Ki4T2FK9 pic.twitter.com/WUsnLikuh6

Scientists cited abnormally warm temperatures from December to February which spurred melting. Temperatures rose between 2-6C across all regions.

“I’ve never seen such a warm, crazy winter in the Arctic,” said NSIDC director Mark Serreze. “The heat was relentless.”

Ice extent grows through autumn to winter, and the maximum usually occurs in mid-March. Sea ice then retreats through spring and summer, declining to its smallest or minimum extent by mid-September.

The September Arctic minimum has typically drawn more attention than the March maximum, after it first shrank to record lows in 2005, then 2007 and 2012, scientists said.

That changed last year when the maximum extent was the lowest.

“The Arctic is in crisis. Year by year, it’s slipping into a new state, and it’s hard to see how that won’t have an effect on weather throughout the Northern Hemisphere,” said Ted Scambos, lead scientist at the Colorado-based NSIDC.