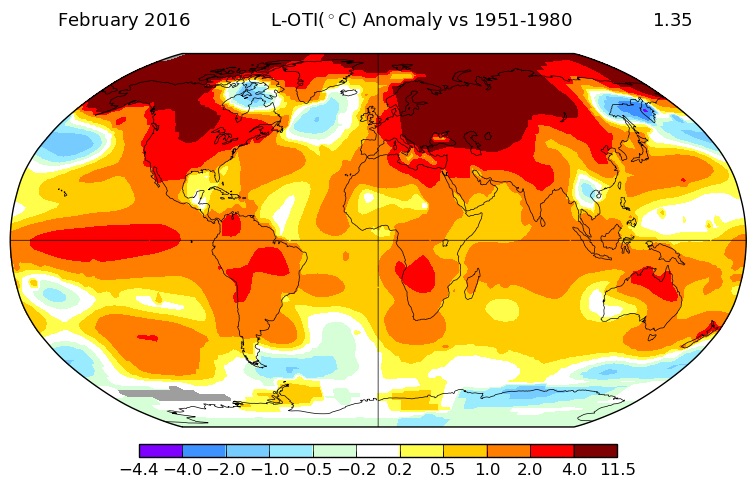 February 2016 broke global temperature records, according to data released by NASA on Saturday.

Global surface temperatures were 1.35C above the 1951-1980 global average for the month, a development described by experts as “an ominous milestone towards a warmer planet.”

“Perhaps even more remarkable is that February 2016 crushed the previous February record – set in 1998 during the peak atmospheric influence of the 1997-98 super El Nino that’s comparable in strength to the current one – by a massive 0.47C,” wrote Jeff Masters and Bob Henson on the Weather Underground blog.

“We are in a kind of climate emergency now,” Stefan Rahmstorf of the Potsdam Institute of Climate Impact Research told the Sydney Morning Herald.

“Governments have promised to act [to curb greenhouse gas emissions] and they need to do better than what they promised in Paris.”

Last year was the hottest year ever by a “strikingly wide margin”, according to the World Meteorological Organization. January 2016 similarly smashed records, NASA said.

It comes as Arctic sea ice extent fell to record lows in February. While carbon dioxide levels are increasing faster than they have for millennia, the National Oceanic and Atmospheric Administration said last week.

The spurt in global warming brings temperature rise perilously close to the 1.5C aspirational limit agreed at a UN climate summit last year. Governments pledged to cap warming “well below” 2C by the end of this century to avoid runaway climate change.