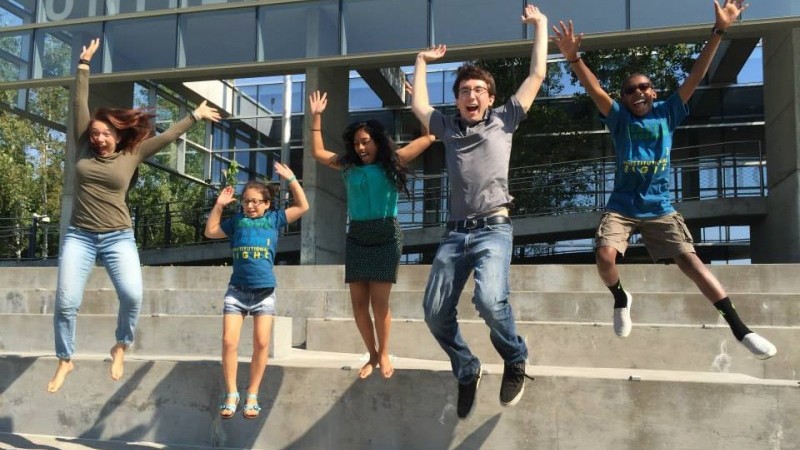 That is the question 19-year-old climate activist Kelsey Juliana will be asking in Eugene District Court, Oregon on Wednesday.

Alongside 20 other young people, she contends US federal government inaction on climate change violates her constitutional rights and fails to protect public trust resources.

The remedy they seek is an order to reduce carbon dioxide in the air to a “safe” level of 350 parts per million by 2100. It is currently 400ppm and rising.

They are backed by charity Our Children’s Trust, plus climate scientist James Hansen and – inspired by Pope Francis’ teachings – two Catholic organisations.

This face-off has attracted so much interest, the court has arranged to livestream the hearing in three overflow rooms.

When Juliana heard the lobby groups were opposing their lawsuit, she tells Climate Home by Skype from Oregon, she had mixed emotions.

“At first, I was shocked, I was like: they can’t do that, that is not for real. Then I was scared, definitely scared. Then I was like: oh my gosh, this is amazing. It’s almost a blessing, bring it on. Now we have blatantly, clearly, the youth against the government and fossil fuel companies.”

Now studying environmental education and policy at Warren Wilson College, North Carolina, Juliana has been active on climate change for years. She hopes to work with children or community organising when she graduates.

“My parents did organising work when they were in their twenties, to save Oregon old-growth forests,” she says. “I grew up with a set of values from them about caring for this Earth and generations to come.”

Aged 15, she filed a lawsuit with Our Children’s Trust against the Oregon state, where she grew up. That is ongoing – they are waiting for a Court of Appeal hearing. Taking on the federal government was a natural next step.

A media natural, Juliana comes across as passionate, articulate and un-phased by impertinent questions like: how can an 8-year-old (the age of the youngest plaintiff) know what’s best for them? Are they being used by adults to further their own agenda?

“You are just looking for a way to be cynical and to deny that youth have such a powerful voice,” she says. “We are able to see through greed and self-interest and speak up for what we know and think is right.”

The young plaintiffs speak from their own experience of climate change impacts across the US, she adds. Levi Drahaim, the 8-year-old, could see his Florida home swallowed by rising sea levels in his lifetime.

While their media appeal is undeniable, legally the youth have an uphill battle.

Report: US forests struggle as drought and climate change bite

Environmental law expert Michael Burger at Columbia University’s Sabin Center tracks climate litigation in the US and around the world.

“The US, at the federal government level and in the courts, has never accepted and has consistently opposed the idea that there is a constitutional right to a healthy environment,” he tells Climate Home. “This case is fairly unique in trying to push against that.”

Alongside the constitutional argument, the lawyers are appealing to public trust doctrine. That is the idea that the state has responsibility for some resources, regardless of private property ownership.

Our Children’s Trust tried that already, with five teenagers, in a three-year saga that ended at Washington DC court of appeal in 2014. Public trust duty doesn’t apply to the atmosphere, the judge ruled.

This time around, they are linking the argument to fossil fuel resources, which are more clearly covered by the doctrine. To change the course of federal climate action, the youth ultimately need to go all the way to the Supreme Court.

Behind these technical obstacles are concerns about the balance of power between the judiciary and government, says Burger.

“The danger that I imagine the fossil fuel industry perceives here is, if the court allows the case to move forward, then the judicial branch are getting much more integrally involved not just in policing the other branches but setting policy.”

At state level, Our Children’s Trust has had one win, in Washington. Yet to the campaigners’ dismay, this month the administration withdrew a proposed rule to reduce carbon emissions.

Internationally, there is an example of judges enforcing stronger climate policy, 8,000 kilometres from Oregon in the Netherlands. In a landmark decision last year, a district court in the Hague sided with campaign group Urgenda, ordering steeper emissions cuts.

That has no legal bearing on the US jurisdiction, says Burger, “but it shifted the conversation… It may have an inspirational effect.”

Juliana is determined to see the fight through all the way. “In our country, we have the knowledge and the resources and the technology to move away from fossil fuel use,” she says. “We can run societies sustainably.”