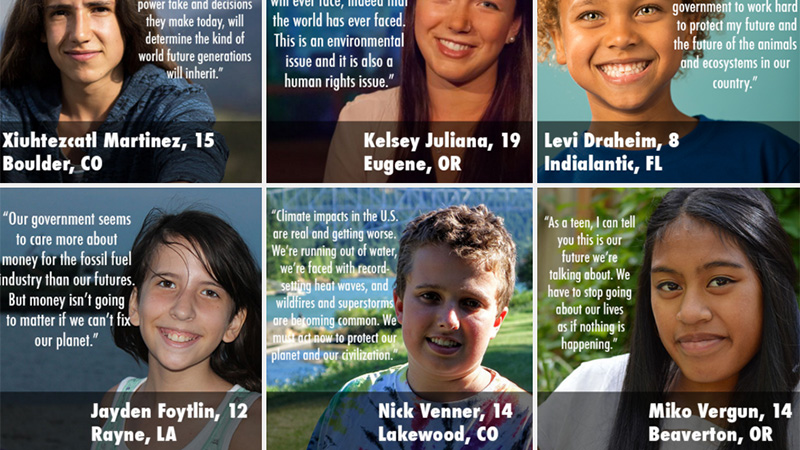 Six of the 21 youths bringing the charges (screengrab: Our Children’s Trust)

Three US trade associations representing the world’s energy giants have been named defendants in a court case brought by young Americans, in a move they say shows the stakes are high.

The American Fuel and Petrochemical Manufacturers (AFPM), the American Petroleum Institute (API), and the National Association of Manufacturers (NAM) joined the US government in the case on Wednesday, after a magistrate in the Oregon district court agreed an adverse ruling would be a threat to their business.

In August, 21 young plaintiffs charged the federal government with violating their constitutional right to life, liberty and property, by failing to prevent dangerous climate change. Renowned scientist James Hansen is backing the case.

They want the administration to deepen carbon emission cuts in line with what science says need to be done to avoid catastrophic levels of global warming.

Who do the lobby groups represent?

The trade associations, who will act with “one unified voice” called the case a “direct, substantial threat to [their] businesses,” according to a statement by the organisation assisting the youth, Our Children’s Trust.

That shows they understand the significance of the case, said attorney for the plaintiffs Philip Gregory. “This litigation is a momentous threat to fossil fuel companies.”

Julia Olson, Executive Director for Our Children’s Trust, a counsel in the litigation, said the trade groups will have to face science-based evidence in a courtroom, “not in the halls of Congress where their lobbying dollars hold the most clout”.

“This case asks the court to order what the industry fears most: a national plan using the best science to leave a nation of clean air and a healthy climate to our kids.”

Report: Around the world in 5 climate change lawsuits

The federal government has filed a motion to dismiss the case, which the trade groups can support. The judge set 9 March as the next court date to hear the oral arguments.

The Obama administration aims to cut emissions up to 28% within 10 years on 2005 levels. That is insufficient to cap warming to the internationally agreed limit of 2C this century, according to independent researchers at Climate Action Tracker.

AFPM, API, and NAM have been approached for comment. Our Children’s Trust is sponsoring suits on behalf of young people in several states.