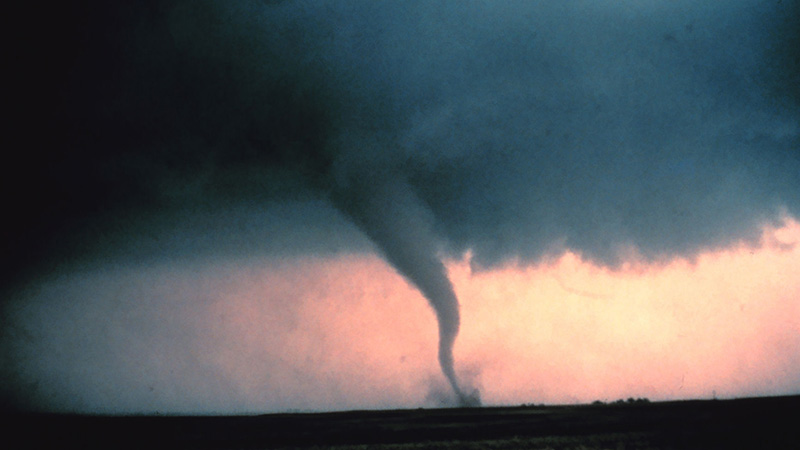 Tornadoes in the US are getting worse, with the numbers in any one outbreak and the hazard of ever more frequent outbreaks both on the increase.

And although climate change driven by global warming from human causes is under suspicion, nobody really knows for sure whether that is driving the pattern of change.

But change is certainly happening. New research published in Nature Communications has examined the pattern of outbreaks and found that the average number of tornadoes in any one outbreak has increased since 1954, and the chance of extreme – and therefore extremely destructive – outbreaks has also increased.

An outbreak is a large-scale weather event that can last for days, span huge regions and spawn multiple tornadoes.

Continental America is used to these outbreaks, which is why a band of territory that spans central Texas, Illinois and Indiana, and embraces parts of Oklahoma, Kansas, Nebraska, Colorado and South Dakota, is known as Tornado Alley.

The plains flanked by the Rockies and the Appalachian mountain chains are a corridor up which sweeps hot, moist air from the Gulf of Mexico, to meet cold, dry air from the mountains and the north. The encounter sets up the conditions for colossal thunderstorms, accompanied by devastating whirlwinds.

The largest recent outbreak was in 2011. It spawned 363 tornadoes across the US and Canada, claimed more than 350 lives, and did $11 billion worth of damage.

Around 1,000 tornadoes are reported in the US each year, with the top two per cent causing most of the death and devastation.

Winds can reach 300 kilometres an hour in a space a mile wide, destroying anything in the way. They uproot houses, blow cars into the air, turn towns into rubble, strip bark from trees and, in one reported instance, even tear asphalt off a highway.

Research such as this matters because it could help societies prepare better.

One consistent prediction within climate research is that, as average global temperatures rise in response to greenhouse gas emissions from fossil fuel combustion, so does the likelihood that meteorological disasters could become more frequent, or more violent, or both.

“It could be global warming, but our usual tools are not up to the task of answering this question yet”

But although that seems to be the case over the last two decades – the UN Office for Disaster Risk Reduction (UNISDR) reported last year that the number of weather-related disasters had almost doubled – it does not mean that warmer years must be more calamitous.

Last year was declared the warmest since records began, and UNISDR reported 32 major droughts that affected more than 50 million people, but only 996 deaths in recorded storms, compared with the annual average of more than 17,000 in the preceding decade.

Caprice plays a powerful role in climate events − and that includes tornadoes, particularly in the US.

There is evidence that the tornado season is commencing ever earlier. Between 2005 and 2014, tornadoes claimed on average 110 lives in the US each year, and caused between $500m and $9.6bn worth of damage.

So tornadoes were destructive long before any concerns about global warming. And the new study – sponsored by, among other research agencies, a re-insurance giant – is concerned with any statistical or mathematical logic in tornado patterns that might provide a guide to future hazards.

“It could be global warming, but our usual tools, the observational record and computer models, are not up to the task of answering this question yet.”

That is because, although warming might favour the conditions for tornado formation, there is no certainty that any tornadoes will form, or cluster in an outbreak.

“When it comes to tornadoes, almost everything terrible that happens happens in outbreaks,” Tippett says. “If outbreaks contain more tornadoes than average, then the likelihood they’ll cause damage somewhere increases.”

But, ominously, while the total number of potentially dangerous tornadoes each year has not increased, the average number of tornadoes spawned in any one outbreak has risen by 50%. The average used to be 10, but now it is 15.

The conclusion is that the increase could be described by a mathematical tool called Taylor’s power law of scaling.

And Joel Cohen, co-author of the study and director of the Laboratory of Populations based at both Rockefeller University and Columbia’s Earth Institute, says the number used to describe the rate of growth is “truly exceptional. It means that when it rains, it really, really, really pours.”