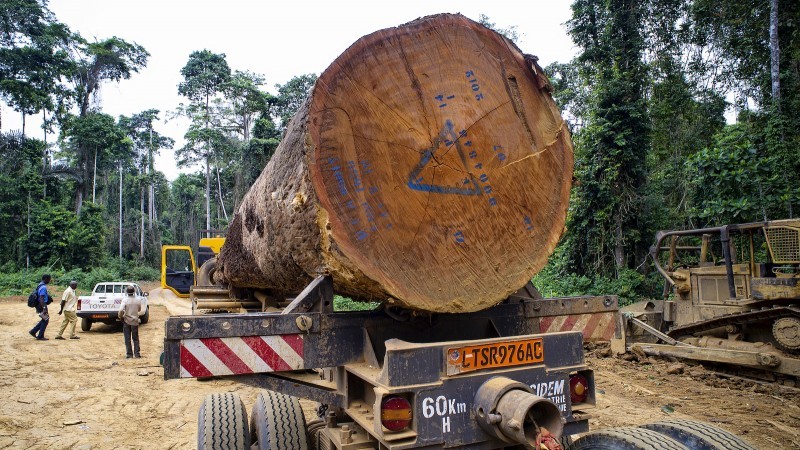 The Democratic Republic of Congo is planning to lift a ban on logging licences, to the concern of campaigners.

An area of tropical forest twice the size of France, home to species like the bonobo and okapi, is affected by the proposal.

A coalition of 12 environmental and anti-corruption NGOs urged the government to keep the moratorium, started in 2002, in place.

Irene Wabiwa Betoko of Greenpeace Africa said: “The large-scale logging of DRC’s rainforest was and is a disaster. It not only harms the country’s environment, but also fuels corruption and creates social and economic havoc.”

Environment minister Robert Bopolo Bogeza said in a recent speech ending the moratorium, in place since 2002, would boost the country’s revenues.

Civil society was sceptical. Despite a wealth of natural resources, DRC’s 80 million citizens are among the poorest in the world. Transparency International ranks the state among the 25 most corrupt globally.

A report commissioned by watchdog ITIE-RDC found that in 2014, when a tenth of the rainforest was being logged, the government took just US$8 million from the sector.

“The argument that logging can significantly contribute to government revenues is completely unfounded,” said Joseph Bobia, of Reseau Ressources Naturelles.

What is more, the move would appear to jeopardise millions of dollars worth of support offered by Norway, France, Germany, the UK, and the European Union to protect the rainforest.

For international donors, halting tropical deforestation is a cost-effective way to mitigate climate change. Trees absorb carbon dioxide when they grow, offsetting some of the emissions from burning fossil fuels. If cut down, that carbon sink is lost.

DRC emphasised the role of forests in its national pledge towards last year’s Paris climate deal. It promised to plant 3 million hectares with trees by 2025 and protect 152m ha of existing vegetation.

Lars Løvold of Rainforest Foundation Norway said: “At a time when the global community is working together to protect the world’s last rainforests, a vital defense against climate change, the DRC government seems to be undermining the commitment to reducing emissions that it presented in Paris.”