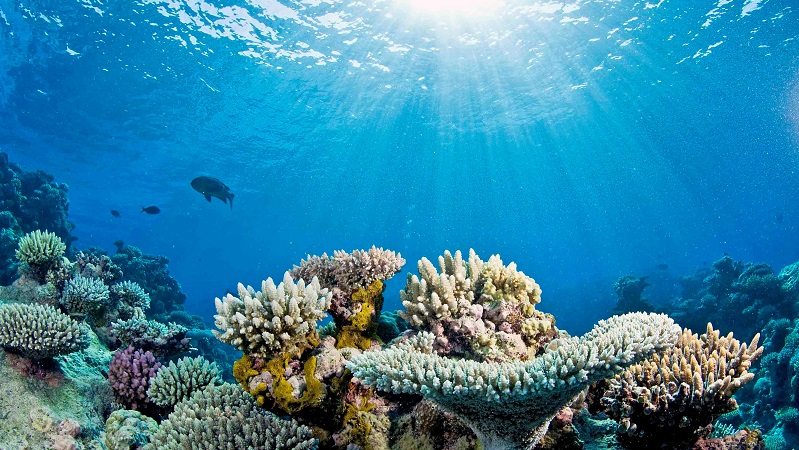 Scientists from the US and Australia have direct evidence that the increasing acidity of the oceans is slowing the growth of coral reefs.

In the first-ever experiment that manipulated seawater chemistry in a natural coral reef community, they used a set of semi-detached lagoons – reef enclosures naturally cut off from the ocean at low tide – to run a sustained experiment in which they altered the chemistry of the immediate seas.

What they found was that when they returned the lagoon’s pH value − a measure of the acidity of water − to the marine alkalinity levels that had been consistent for most of human history, the corals grew with measurably more vigour.

They report in Nature journal that they were able to match levels of pH to a measure of the net calcification (how much calcium they were accumulating) of the community of corals they were examining.

The message is simple. Corals grow better when oceans are at the levels of low acidity that encouraged the evolution of coral communities in the first place.

The rising levels of carbon dioxide in the atmosphere are not only raising global temperatures. They are also making the oceans more acidic, and, as a consequence, coral growth is weakened. Since tropical coral reefs represent one of the richest ecosystems in life’s web, this is not good news.

This real-life, real-ocean experiment confirms predictions based on climate models and on controlled laboratory studies, and also on direct observations made by members of the same research team in previous years.

But what has consistently bedevilled prediction has been uncertainty about the extent of other impacts.

The planet’s coral reefs have, over time, been hurt by human action in the form of pollution, overfishing and even quarrying. They have also been damaged at intervals by periods of extreme water temperatures, driven by natural phenomena such as the El Niño cycle. So direct measurement of the impact of changes in water chemistry has been hard to establish.

“The only real, lasting way to protect coral reefs is
to make deep cuts in our carbon dioxide emissions”

The scientists measured the acidity of seawater that flowed over a reef off Australia’s One Tree Island in the southern Great Barrier Reef. At low tide, the reef encloses a lagoon isolated from the rest of the ocean

They then added sodium hydroxide to bring the pH closer to what it would have been two centuries ago, based on estimates of what carbon dioxide levels must have been at the time.

The altered water was then they pumped onto the reef, and measurements were taken of the rate at which the corals took up calcium from the water to make their skeletons.

“Our work provides the first strong evidence from experiments on a natural ecosystem that ocean acidification is already slowing coral reef growth,” says the study’s leader, Rebecca Albright, a marine biologist in the Department of Global Ecology at the Carnegie Institution for Science, California.

“Ocean acidification is already taking its toll on reef communities. This is no longer a fear for the future, it is the reality of today.”

“If we don’t take action on this issue very rapidly, coral reefs – and everything that depends on them, including wildlife and communities – will not survive into the next century.”

The effect so far is small: without the acidification trend, corals might make 7% more growth. But the implication is that, over time, the entire Great Barrier Reef system could be threatened by ocean acidification.

In a second study, published in Nature Communications, a team led by Mathieu Mongin, a biogeochemical modeller at the Commonwealth Scientific and Industrial Research Organisation in Hobart, Tasmania, used a computer model based on ocean circulation and biogeochemistry and other data from 3,581 reefs to confirm the hazard.

Their results also indicate the complexity of the problem. Corals build their skeletons with a form of calcium carbonate called aragonite, and the change in ocean chemistry is steadily lowering the aragonite saturation state of the reef waters.

However, these levels are not uniform, and the latest study suggests that the corals upstream – that is, to the north and on the ocean edge – could be making the most of the available calcium, while those further inshore and to the south get less, and are therefore increasingly at risk of eventual dissolution.

“In other words, good coral health in the outer reefs, especially in the northern and southern regions, creates less favourable conditions for the mid-lagoon central reefs,” Dr Mongin reports.