Campaigners say they have been emboldened by the prosecution of 13 activists, promising more direct action to highlight the dangers posed by global warming 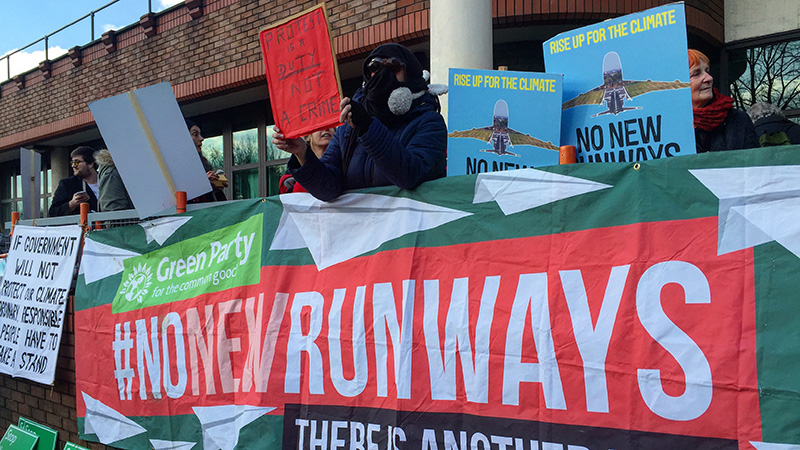 The mood outside Willesden magistrates court on Wednesday was defiant.

“They are an inspiration, not a deterrence,” said Jamie Kelsey-Fry, contributing editor to the New Internationalist, of the 13 activists facing sentencing for mounting a climate protest at the UK’s largest airport.

“They are climate heroes, facing jail on behalf of all of us,” tweeted veteran environmentalist George Monbiot, urging his legion of followers to join the fight against airport expansion.

Around 300 people turned up outside the north west London court to show their support for the defendants, the youngest of whom was 23, the oldest 67. 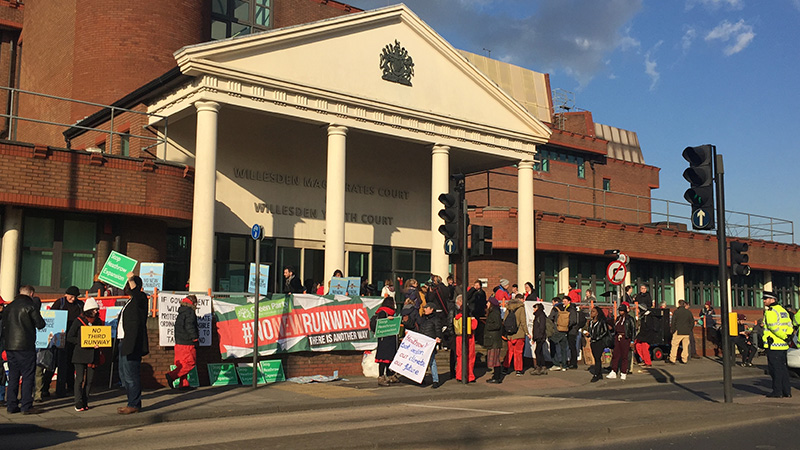 The street surrounding the court building was filled with politically fired banners, songs and dance. ‘PROTEST IS A DUTY, NOT A CRIME’ read one woman’s placard.

Many supporters wore red boiler suits emphasising their belief that environmental destruction is a ‘red line’.

Despite the clear anger and underlying trepidation in anticipation of custodial sentences for the 13, spirits remained high throughout the day.

Conga lines were formed outside the building.

David Cameron’s “no ifs, no buts, no third runway” 2009 pledge evolved into a chant so loud one defendant said it could be heard inside the courtroom.

At 4pm the verdict was delivered. The group was found guilty of aggravated trespass and being unlawfully airside, after staging a peaceful protest last year against a third runway at Heathrow.

The court ruled that the 13 are to face six-week sentences suspended for twelve months.

But for those outside this campaign is far from over.

Speaking outside Willesden magistrates court in north west London following the ruling, the group called for continued “civil disobedience” against the fossil fuel industry: “We’re in it for the long haul. No ifs, no buts.”

“You can build new runways or stop climate change but you cannot do both”, were the words of 44 year-old Sheila Menon, one of the 13, as she addressed cheering crowds.

“Now we call for an escalation in action against the pollutants – to help bring about the end of the fossil fuel age and for communities to organise to transition to a socially just and sustainable world.”

Campaign group Plane Stupid is calling for more people to join in the movement by attending a flash mob at Heathrow on 27 February to stand in further opposition to the third runway plans. “Don’t let climate protest be silenced” is their message.

“Some governments and some corporations need more than just a sternly worded letter,” said the Labour party’s McDonnell as he addressed the cheering crowds.

“We should be immensely grateful for their courage to take action at high personal risk. The past teaches us that ordinary people taking extraordinary action can change the course of history.”

Did you know?
The aviation sector is already responsible for greenhouse gas emissions the size of Germany’s, with the amount set to roughly triple by 2050.

Danielle Paffard, another of the defendants, showed relief and optimism as she left the court building. She described the ruling as “a triumph for democracy, a triumph for the movement.”

She remained unconvinced that the run in with the law would deter more people from taking action, a view was echoed by others in the crowd Climate Home spoke to.

“This is inspiring younger generations to do the same thing and take direct action,” said  Kelsey-Fry. “There is no knight in shining armour coming to save the world from climate change.” 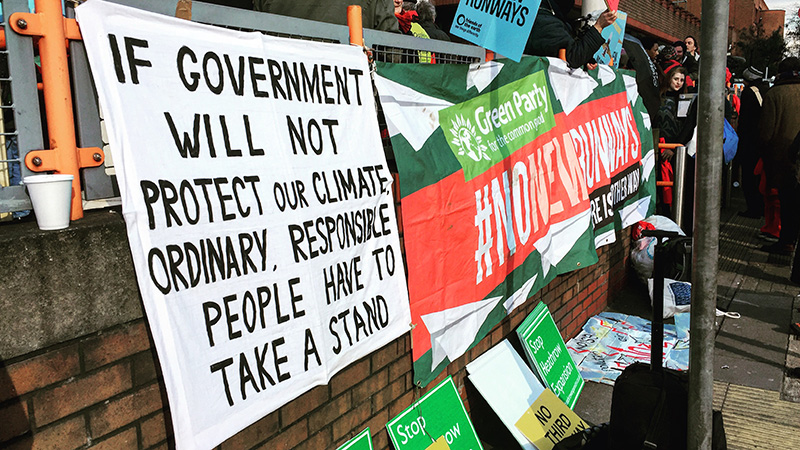 “They [the 13] have called for more disruptive action. If more people have to supposedly ‘break the law’ then people are up for it”, an independent activist named Luther told Climate Home.

Speaking to Climate Home, Robin, a friend of Pafford, described how environmental issues can unite people across the social and demographic spectrum.

“Once you look into these guys and what they have done they’ve got some very persuasive arguments. I’ve always cared about climate but haven’t always engaged as much as I should. These guys are doing something about it and so I’m here in support of them”, he said.

“I think this action has actually achieved a lot. It has engaged people with the issue who wouldn’t have done previously. The momentum and the trajectory of the Heathrow 13 will not go away.”