Latest batch of released intercepts reveal US penetrated UN, Germany and Japan discussions on plans for the Copenhagen climate summit 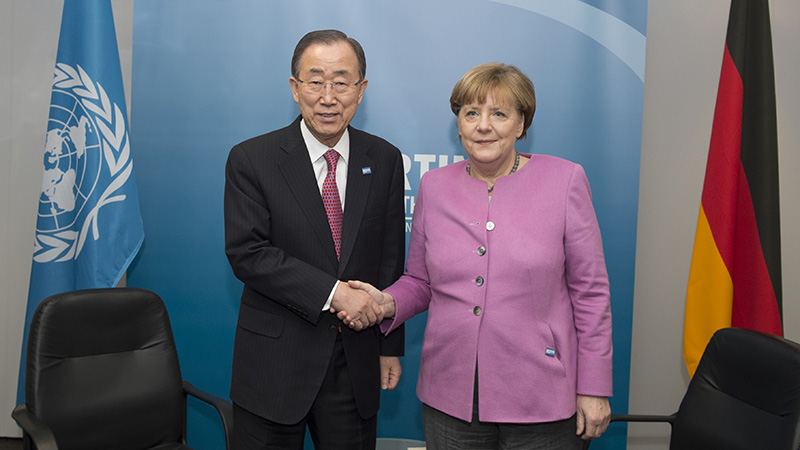 Ban Ki-moon and Angela Merkel’s discussions on the prospects for a new global climate pact were recorded by US spies, according to new cables released by Wikileaks.

Communications between the UN secretary general and German chancellor in late 2008 – just after the election of President Barack Obama – saw both parties hoping for more US climate ambition.

“Ban… maintained that since the new U.S. administration will have a very engaging and proactive attitude on the issue, the time is right for the EU and the whole world to create conditions necessary for reaching a meaningful deal at the 2009 UN Climate Talks,” reads one cable.

“Both Ban and Merkel favoured holding a mini-summit in early 2009 to involve the new U.S. administration, believing that it is important to get a clear idea of U.S. intentions. Merkel believed that the climate-change issue should be discussed at the heads-of-state level, otherwise it would not work.”

US spies also targeted Germany’s communications with Japan on climate change, with Berlin’s top G8 negotiator admitting the government had bowed to Washington’s demands to water down proposed carbon cuts.

“In response to a U.S. request, his country would likely give up its demand for a 25- to 45-percent mid-term carbon dioxide reduction,” the cable read.

The two notes are part of a larger body of intercepts released by the Wikileaks organisation, most dating from 2008-2010.

They illustrate the level of importance the US diplomatic service placed on the global climate talks, and the degree to which they had penetrated rival countries’ communication systems.

The 2009 UN climate summit in Copenhagen ended in diplomatic disaster, with an acrimonious ‘Accord’ eventually agreed among most countries after fierce haggling. It took five years of intense talks before the world eventually signed off on a global pact in Paris.