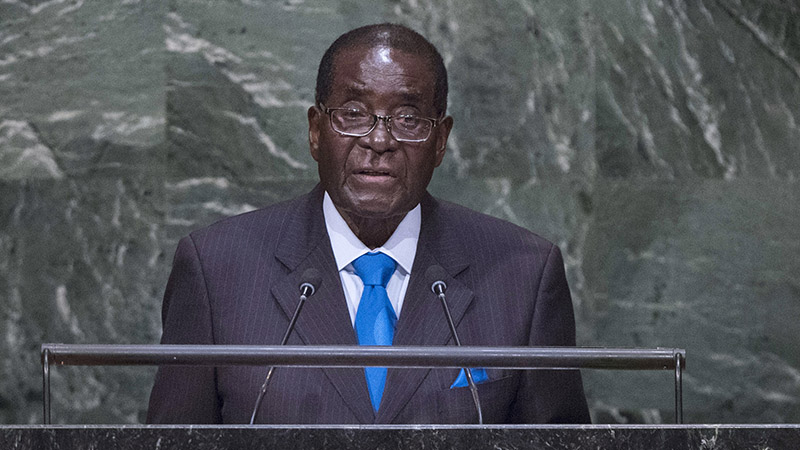 Zimbabwe is a nation in crisis.

Last week the government declared a state of emergency as drought intensified across the country, leaving an estimated 2.4 million- a fifth of the population – facing chronic food shortages.

Parched rivers, browning vegetation and dying animals can be found across the country, aid agencies working in the country have told Climate Home.

The government says around 16,000 cattle have died, while over 70% of crops in the worst hit areas in the south of the country have been abandoned.

“The situation is dire,” says Jan Vossen, Oxfam’s country director from his office in Harare. “The rains are failing and there is little money.”

In a country where 70% of the population farms for a living and 80% of agriculture is rain-fed, impacts of the current drought are widespread.

In Mashingo province there are reports of households removing their thatched roofs to feed livestock. Selling them is pointless. The price of a cow has collapsed from US$300 to $30.

Elsewhere some schools report faltering attendances: kids are too hungry to study or their parents cannot afford the fees.

“This is two years of consecutive drought,” says Verity Johnson, an aid representative for CAFOD who has worked in the country on and off since 1997.

“What we observe, what we see is every year rains are more erratic and changing.”

World Bank climate data suggests summer rainfall levels are declining, a development cited in the climate plan submitted by Zimbabwe to the UN ahead of last year’s Paris talks.

“Intra-seasonal rainfall characteristics such as onset, duration, dry spell frequencies, and rainfall intensity have worsened,” it says, warning maize yields could fall 30% by 2030.

“Probability of years in which growing season is likely to fail in future due to drought is projected to be as high as 100% in some parts of the southern region.”

President Robert Mugabe, the 91-year-old who has run the country since 1987, says climate change and developed countries are to blame.

“Not only are developed countries miserly in providing the means of implementation for the Convention, they also want to inordinately burden us with cleaning up the mess they have created.”

Oxfam and CAFOD’s country representatives both blame climate change and a rampant El Nino for a portion of Zimbabwe’s plight, but critically, not all of it.

“We also have to look at chronic and structural aspects of food insecurity,” says Vossen. “Even in a normal rain year there are 700,000 people in Zimbabwe that are food insecure and face difficulties to make ends meet.”

In 2014, the country was already rated at 156 out of 187 in the UNDP human development index. Only 11% of children get adequate nutrition, according to the World Food Programme.

Average crop yields per hectare in Zambia, Malawi and Mozambique are 3 tonnes, compared to 0.8 in Zimbabwe.

Climate forecasting is weak. Just 25% of the country’s 1,400 weather stations work. The meteorological office’s budget has been cut 25% from 2014 levels.

And in a country with an estimated 10,000 dams, basic water storage systems have been neglected.

According to a 2013 report in the Herald newspaper, irrigation levels fell 50% from 2000 to 2013. Funding for new schemes had crashed as a result of the financial crisis.

The result is a country known as the ‘breadbasket of Africa’ in the 1960s, 70s and 80s is now calling for $1.5 billion of food aid to feed a starving population.

Wheat, maize and rice made up 8% of imports last year, costing $385 million and edging the country closer to owing $10 billion to external creditors.

“The government used to store grain in big silos… but because of management problems these silos no longer provide the buffer in times of crisis we are facing right now,” says Vossen.

The government has few alternatives but to ask for help. Zimbabwe is only just recovering after a catastrophic slump from 2000 to 2009, when the economy shrank 40%.

“Effectively this drought is worsening an economic crisis that has already been there,” says Knox Chitiyo, associate fellow at Chatham House and a veteran observer of Zimbabwe politics.

“The government is facing multiple crises. There is investor uncertainty and manufacturing has almost collapsed.”

From 2000-2009 agricultural revenue fell $12bn according to the Commercial Farmer’s Union, which used to only represent white farmers.

The theory has some surprising supporters – one of them is Mugabe.

Last year he told the government-controlled Herald newspaper most of those handed farms under his initiative were using “just one third of the land.”

Many could not cope with the size of farms they had taken over, he said.

“We need to remove politics from farming,” added Reserve Bank chief John Magudya last year. “We only need 2000 farmers who are adequately funded.”

He blamed a “culture of laziness” and said too many farms were lying abandoned, in quotes reported in the New Zimbabwe paper.

But blaming the evictions for food shortages is a little simplistic. Many of the larger areas reserved for the 4000 or so white farmers used to produce tobacco.

Of the average 2 million tonnes of maize that used to be produced, more than half was grown by the [black] small-scale farmers,” Richard Taylor, spokesperson for the CFU told the UN in a 2014 report.

Chitiyo argues for balance. The land revolution had an effect – scaring away many foreign investors – but a good number have become productive.

“I don’t think one can lay all food shortages as the fault of the land issue. Perhaps it was contributory but it is not the sole factor,” he says.

What’s closer to the truth is that where larger commercial farms could historically afford to invest in irrigation systems, smaller farms depend on the weather.

And that cuts to the heart of Zimbabwe’s current crisis. The rains have been poor, but a lack of investment in water management and basic resilience has exacerbated the situation.

As late as December the government was flying blind. “Ample supplies of agricultural commodities in some regions will reduce the El Nino impact”, reads the 2016 budget.

This level of complacency offers a deadly lesson in how not to prepare for future climate impacts. “At the macro level very little investment has been done because of lack of funding,” says Vossen.

That looks like it’s changing, according to the budget document. But with around 80% of government funds used to pay the civil service, external donors are having to stump up.

The EU, Switzerland, Japan, Kuwait and Abu Dhabi have offered $37m to boost irrigation in 2500 hectares of crop lands, with the UK pledging a further $48m for “food resilience”.

One World Food Programme project in Chiredzi, a district in the south east of the country, suggests that small-scale investments in water management can deliver results.

“The scheme has helped to provide access to water for farming and livestock year-round, regardless of poor rains,” reads a report on its website. 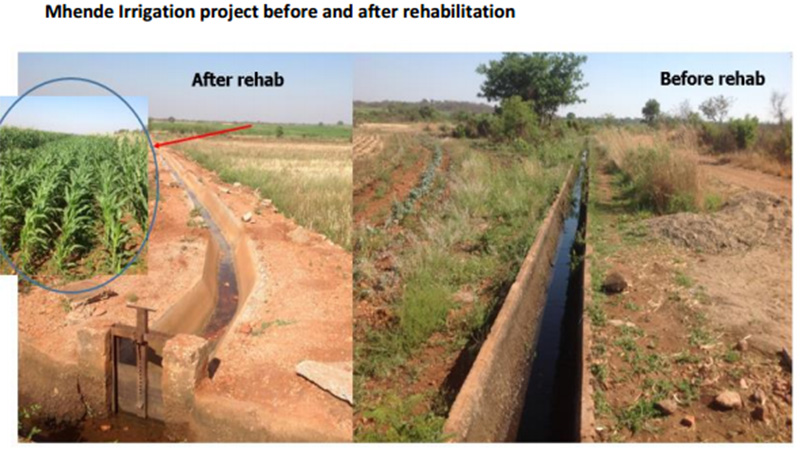 NGOs also plan to work with local communities to wean them off maize, a staple part of the local diet that is vulnerable to weather extremes.

Habits are “entrenched” says Johnson, but the crop looks “less and less viable” as the climate changes.

Other government initiatives include a $200,000 outlay for cloud seeding planes, and $28m for maize and fertilizer deliveries to 300,000 vulnerable households.

Presidential elections loom in 2018 and will worsen political instability, says Chitiyo. “There is jostling for power in the government and opposition, and this has spilled over to the economy.”

Mugabe will likely use his birthday party on 28 February – rumoured to cost $800,000 – to cement his grip on power.

Meanwhile millions starve, unwitting victims of government incompetence, an economic crisis not of their making and a changing climate.