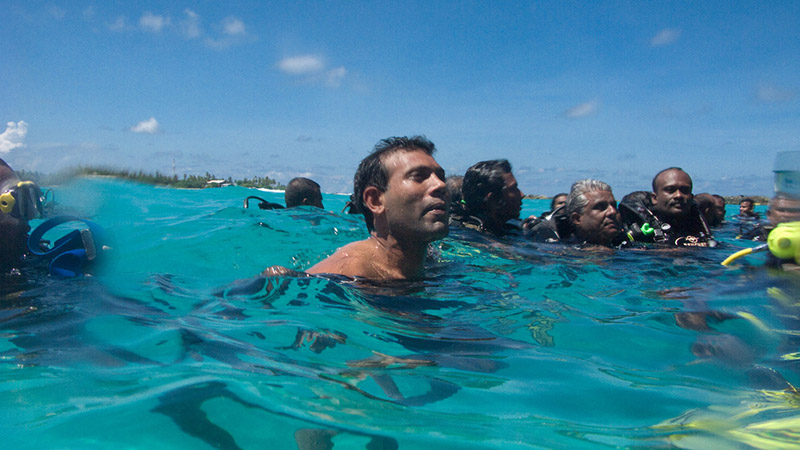 Nasheed meets the press after the Worlds first ever underwater cabinet meeting held at Girifushi island in 2009 (Pic: Maldives Presidency/Flickr)

Days after being freed early from a 13-year prison sentence, Mohamed Nasheed said the country was regarded an “ecological villain”, pursuing dirtier energy policies since his ousting in 2012.

In response to a question by Climate Home, he said Male should no longer lead the Alliance of Small Island States, which negotiates at UN talks.

Represented by human rights lawyer Amal Clooney, Nasheed had been released after 10 months of incarceration to seek medical treatment. He said he had not yet decided whether to return to serve the remainder of his sentence.

Nasheed snorkelled to international fame by holding an underwater cabinet meeting in 2009 to highlight the coral atoll nation’s vulnerability to rising seas.

At that year’s Copenhagen climate summit, the Indian Ocean island pledged to be the world’s first carbon-neutral state, with the former activist helping to salvage a deal.

While its 340,000 population accounts for only 0.003% of global greenhouse gas emissions, the climate-threatened state wanted to set an example, cutting reliance on diesel generators.

His successor, President Abdulla Yameen, backtracked on that ambition. Under the Maldives pledge submitted towards last month’s Paris climate pact, its emissions will triple between 2011 and 2030. That represents a 10% cut from business as usual forecasts, although with foreign aid it could deepen reductions to 24%.

“The idea that carbon emissions equals development in my view is ludicrous,” said Nasheed. “There is new technology available and I think if you are able to embrace this new technology it would be very difficult for you to claim leadership of the future or coming times.”

It was the Marshall Islands’ foreign minister Tony de Brum who quietly roused a “high ambition coalition”, breaking deadlock in the final days of the summit.

The Maldives lent clout to a successful drive for a 1.5C aspirational warming limit in the Paris deal, the diplomat claimed.

Originally appointed by Nasheed, Waheed turned on his former leader. “Under Nasheed’s administration, he didn’t make any tangible move to realising that carbon neutrality pledge, whereas today we are making tangible moves where you can see effects of policies rather than promising empty words.”

The ex-president was “darling of the international media” who projected himself as a “democratic champion” aided by “celebrity lawyers,” he said, adding: “Under his administration’s initiative he took reduced more freedoms and rights than ever before.”

Nasheed was tortured and held in solitary confinement, it was claimed, following a trial branded a “travesty” by Amnesty International.

Clooney called on the European Union to impose targeted sanctions on Male.

Ben Emmerson, a barrister on the case and UN special rapporteur on human rights said Nasheed was referred to as the “Mandela of the Maldives” with “good reason”.

“That’s not just because he was imprisoned for his political beliefs. It is because like Mandela spurious terrorism charges were used as justification for putting a political activist out of the way of public opinion or continued political work.”