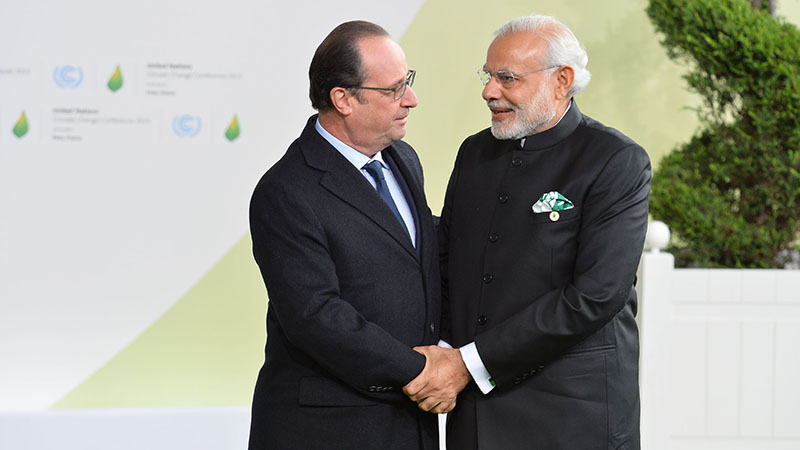 Narendra Modi being received by the President of France, Francois Hollande, on his arrival for the UN climate summit in Paris in November 2015 (Flickr/ Narendra Modi)

The sun rose on an unprecedented initiative to scale up solar power worldwide on Monday.

Uniting over 120  sun-drenched countries based primarily in the tropics, the alliance seeks to accelerate the share of power generation from clean energy sources to counter climate change.

Modi, who first proposed a solar push by Asian countries as governor of Gujarat, said it would spur innovation allowing the technologies to compete with polluting fossil fuels in poorer countries.

The alliance would “work like a life-giver to mankind,” he said in a rare speech in English.

“As the developing world lifts billions of people into prosperity, our hope for a sustainable planet rests on a bold global initiative.”

India will put an initial $30 million into the venture based in the National Institute of Solar Energy in Gurgaon, on the outskirts of New Delhi. Its eventual goal is to raise $400m from membership fees and international agencies, reported the Guardian.

Francois Hollande, whose country hosted UN climate talks last month, called the alliance a “gift from India.” France’s development agency will pledge €300 million over the next five years for solar energy, he said.

UK solar entrepreneur and founder of charity Solar Aid, Jeremy Leggett said: “It’s important that people come out of Paris with the wind in their sails. Clearly it’s got good potential.

“But with all of these things you have to see how much real substance there is in all of the clatter of announcements that we heard daily and even hourly in Paris.”

Solar power is a pillar of India’s commitment to cut its carbon intensity – emissions for each unit of GDP – 33-35% by 2030. It aims to install 100GW worth of panels by 2022, plus 75GW of other renewable technologies.

The three-day visit comes as India and France said that they are close to closing a multibillion euro agreement for New Delhi to purchase 36 Rafale fighter jets, according to the New York Times.