Renewables can make the world richer and happier. Here’s how

That’s the claim of the International Renewable Energy Agency as it sharpens the macroeconomic case for ramping up clean energy like solar, wind and hydro-power in a new report on Saturday.

Doubling the share of renewables to 36% of the global energy mix by 2030 would expand the global economy up to 1.1% or $1.3 trillion compared with the status quo, the Abu Dhabi-based agency will reveal at its sixth annual meeting this weekend. Existing policies bring it to 21%.

It shows the benefits of ditching coal, oil and gas for domestic resources that counter climate change and spur national employment and health. The newly-inked Paris agreement commits the world to phase down greenhouse gases by the end of the century

IENA, of which over 140 countries are members, mapped two scenarios compared with business-as-usual.

‘REmapE’ has the same goal but the means are different. Greater emphasis is put on renewables to power heating and transport, and would require a larger deployment. We ramp up electric vehicles rather than biofuels, for example.

With winners and losers, the world gets richer

Ukraine, Japan and India are big gainers from scaled up investment. But oil and gas exporters like Nigeria and Saudi Arabia face GDP declines as oil demand is displaced by renewables’ greater share in heat and transport. Under the first scenario, GDP grows slower – by 0.6%. Under the second it’s $1.3 trn – the size of Mexico’s economy.

Life is better on all counts 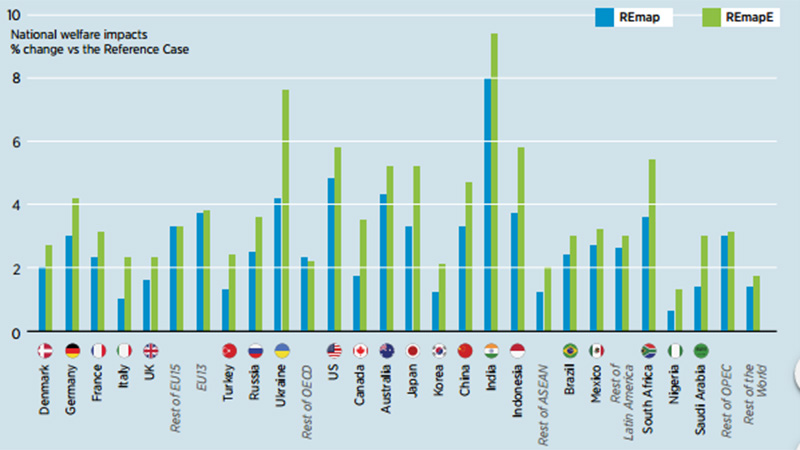 Welfare, or happiness, is tricky to quantify. But cleaner energy sources reduce the frequency and misery of extreme weather. GDP growth (above) creates jobs and boosts tax collection. That’s spent on education and health, which also benefits from lower air pollution. Global welfare will increase 2.7%, rather than 0.6% ordinarily. 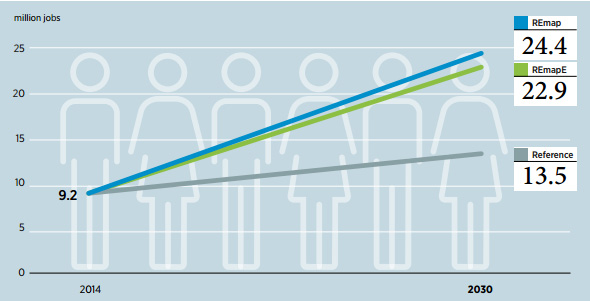 Clean energy jobs will increase 6%, rather than 2% a year under the scenarios. Production of solar photovoltaic cells requires twice the workers per gigawatt hour than in fossil fuel industries, IRENA says. REMapE would actually see less growth with jobs lost in biofuel production if renewables are aggressively scaled up. 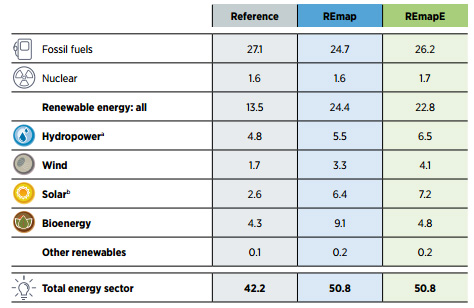 Headcounts in solar and wind are set to grow fastest throughout the value chain as renewable jobs grow about 60%. The fossil fuel industry is set to slightly retrench on lower demand, while nuclear is stagnant.

Global trade cools off as countries become more self sufficient 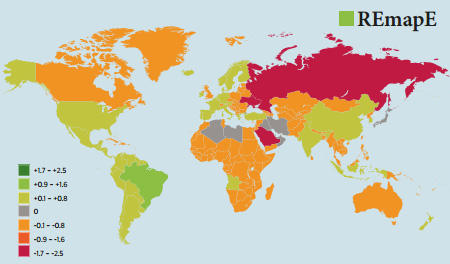 The global export value of all goods and services drop from $50 bn in the reference case to $40bn – comparing business-as-usual figures with a renewables scale-up. That’s due to reduced shipments of fossil fuels. Coal imports would fall 50%; oil and gas 7%. Yet the capital required to make renewable energy creates new markets. The EU would export $15bn more in exports, for instance. 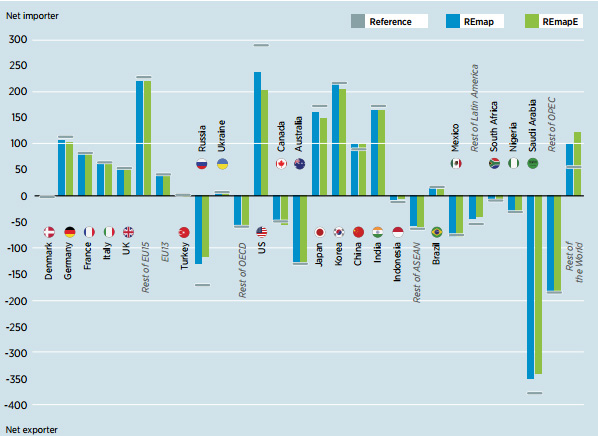 Fossil fuel imports would plunge $104bn by 2030, and a further $181 bn in the case of higher electrification of heat and transport. This assumes an oil price of $129 a barrel, the International Energy Agency’s reference forecast. Saudi Arabia and Venezuela, where oil exports make up a quarter of GDP stand to do worst.

Scaling up renewables to such levels is a tough task. Will countries listen?

Correction: IRENA is not “UN-backed” as described, but an intergovernmental organisation with observer status at the UN.