CO2-sucking technology risks being abandoned, unless governments back projects on a par with other clean sources, expert warns 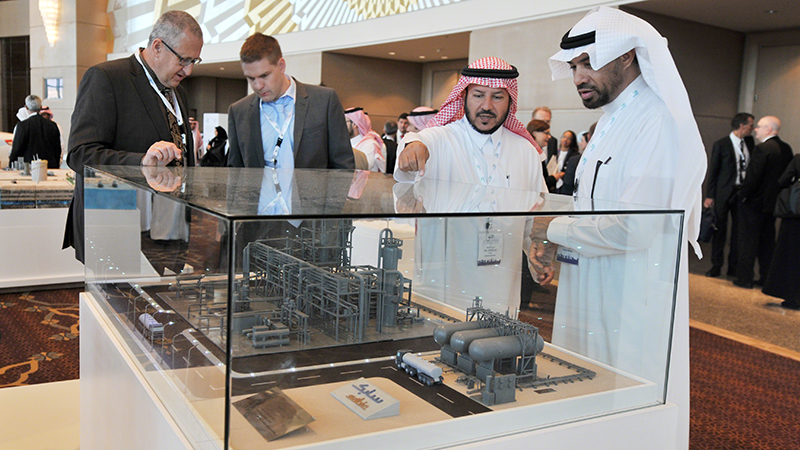 Delegates inspecting a model of a CCS plant at a Saudi Arabia forum in November 2015. Large-scale projects have doubled on a decade earlier, with 15 running last year, according to the Global CCS Institute (credit: IISD.ca)

Carbon capture and storage (CCS) may have become a gamble for austerity-pressed economies but don’t walk away now, a British academic has said.

The fledgling technology that sucks CO2 from industrial plants is indispensable if countries are serious about preventing catastrophic global warming, the University of Cambridge’s David Reiner wrote in journal Nature Energy on Monday.

Without it, the cost of tackling global warming will double says the UN climate science panel. The world leading energy forecaster, the IEA, says it could account for a sixth of carbon cuts by 2050.

Pilots in the US, Europe and elsewhere have been cancelled since 2008, while the UK axed a £1 billion competition to support big projects in December.

Scaling up CCS is hard as it requires “billion-dollar chunks”, government backing as commercial incentives are small, and raw persistence as it proves it can work, Reiner said.

“[Y]ou’re essentially at the stage where, to use a gambling analogy, you’re putting all your money on red 32 or black 29,” said the technology policy lecturer at the university’s Judge Business School.

“And when a certain approach turns out to be more expensive than expected, it’s easy for nay-sayers to dismiss the whole technology, rather than consider how to learn from that failure and move forward.

“If we’re not going to get CCS to happen, it’s hard to imagine getting the dramatic emissions reductions we need to limit global warming to two degrees – or three degrees, for that matter.”