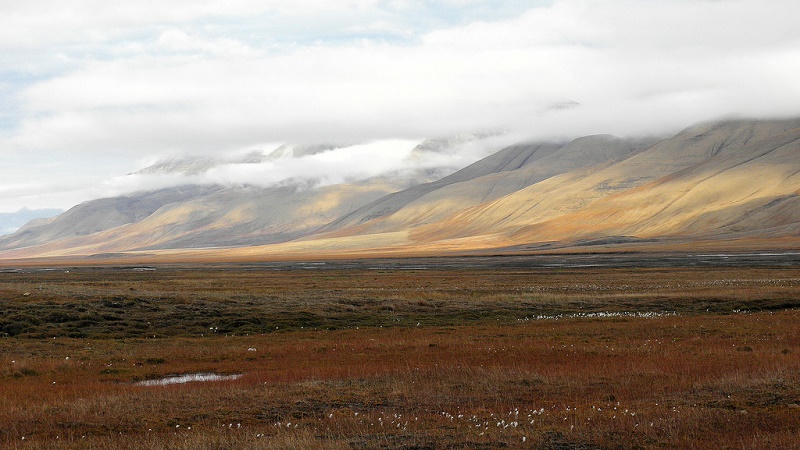 Scientists in the US who have been checking on the health of the Arctic over the last year are worried by what they’ve learned: it’s warmer, has less ice, and some of its animals and fish are facing new stresses.

And in a surprise finding, which they cannot yet explain, the scientists discovered that green vegetation over much of the Arctic began a few years ago to turn an uncharacteristic brown.

Plenty of what they detail in the Arctic Report Card − published annually to document the sometimes rapidly changing conditions in the region − comes as no great surprise.

The latest Report Card, sponsored by the US National Oceanic and Atmospheric Administration (NOAA), shows the air temperature continuing its warming trend. In 2015, it was well above average across the Arctic, with temperature anomalies over land more than -0.16C above average − the highest since records began in 1900.

The report reveals increases not only in air but also in sea surface temperatures, decreasing sea ice extent and Greenland ice sheet mass, and changes to the behaviour of fish and walruses.

“Now in its 10th year, the Arctic Report Card is a key tool to understanding changes in the Arctic and how those changes may affect communities, businesses, and people around the world,” NOAA’s chief scientist, Dr Rick Spinrad, told journalists at the annual American Geophysical Union fall meeting.

“The Arctic is warming twice as fast as other parts of the planet, which has ramifications for global security, climate, commerce, and trade.”

The average annual air temperature over land areas between October 2014 and September 2015 was 1.3C above average, and a 3C increase since the beginning of the 20th century.

Maximum sea ice extent in the Arctic Ocean was the lowest recorded since records began in 1979. The minimum extent, which was the fourth lowest in the satellite record since 1979, has been declining at 13.4% per decade (relative to the 1981-2010 average).

First-year ice now dominates the winter ice cover. It made up about 70% of the March 2015 ice pack, compared to about half that in the 1980s, when older, thicker ice was more prevalent. The thinner, younger ice is more vulnerable to melting in the summer.

Across the Arctic, terrestrial snow cover extent in April was above average, but in June, in both the North American and Eurasian regions of the Arctic, it was the second lowest in the satellite record that began in 1967. Arctic-wide June snow extent has declined 18% per decade since 1979.

For the first time since the exceptional melt of 2012, significant melting (more than 50% of the area) occurred on the surface of the Greenland ice sheet in 2015.

The Report Card says that as sea ice retreats in summer, sea surface temperature (SST) in all the seas of the Arctic Ocean is increasing.

The melting and retreat of sea ice during spring is leading to an increase in sunlight reaching the upper layers of the ocean, promoting photosynthesis and stimulating the growth of algae − the tiny marine plants that form the base of the food chain. “Widespread and exceptional” phytoplankton blooms were seen in several parts of the Arctic in 2015.

In one of the more surprising parts of the Report Card, the authors say that Arctic tundra greenness − a measure of the productivity and biomass of live vegetation such as grasses, sedges, mosses, lichens, and shrubs − had been increasing over the past two to three decades, as shown by the satellite record. But, “for reasons that remain to be identified”, tundra greenness has been declining, or browning, consistently for the past two to four years.

Not only plants but also fish and animals are responding to changes in the warmer environment. Walruses, which traditionally use sea ice for mating, giving birth, finding food and shelter from storms and predators, face a fast-changing habitat.

In recent years, large numbers of walrus have been forced to haul out on land in north-west Alaska, creating problems such as overcrowding and stampedes that have killed calves, and difficulty finding food.

Subarctic fish, including cod, have been moving north into Arctic waters, where they may cause problems for smaller Arctic fish already there.

And in another sign of change, 2014 and the first seven months of 2015 saw the combined discharge of fresh water from eight Eurasian and North American rivers into the Arctic Ocean rise by 10% above the level from 1980 to 1989. Scientists attribute the rise to increasing precipitation linked to global warming.

A 2011 study said the addition of more fresh water to the Arctic could cause unpredictable changes to the climate, not only in the Arctic but also in the Atlantic.