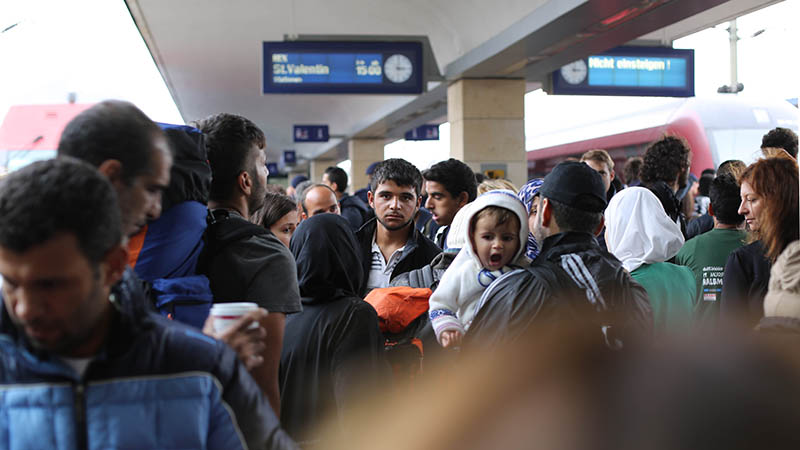 Syrian refugees wait in Vienna for the next train. Years of chronic drought is a factor in the country’s conflict, say scientists (Flickr/ Josh Zakary)

Thousands of people – old, young and babies – struggle to reach the coasts of Europe, many dying en route.

In south-east Asia, dozens of Rohingya refugees from Burma suffocate on packed boats, locked by people traffickers below deck while trying to escape their homeland.

Children from Central America die of thirst in the desert, trying to cross into the US.

Some of these refugees are escaping persecution or warfare back home. Others are fleeing from gang violence, or simply searching for a better life. And some have seen their lands degraded by climate change and their livelihoods threatened by floods or drought.

A new report produced by the UK-based Ethical Journalism Network (EJN), and partly authored by journalists from the Climate News Network, concludes that much needs to be improved in the way the world’s media reports on migration issues.

The report, “Moving Stories”, reviews media coverage of migration in the European Union and in 14 countries across the globe. It is published to coincide with today’s UN International Migrants Day

In Nepal, more than 10% of the population – mostly young men – have migrated over the past 20 years. Most come from mountain villages and go to work on building sites in the Gulf states and elsewhere. Unused to the hot conditions, many have died. But the media in Nepal, says the EJN, lacks the resources to properly investigate such stories.

Refugees from The Gambia, in West Africa, escape repression and poverty at home and make what’s called “the backway” journey across the Sahara to Libya, before falling prey to people traffickers and climbing on to rickety boats to cross the Mediterranean. Again, many die in the process.

But the media in The Gambia is tightly controlled, says the EJN report, and there is little official sympathy for those who choose to leave.

Climate change is not the primary reason these people are on the move, yet it is often a contributing factor.

Official indifference to a severe drought in Syria led to farmers’ protests against the regime in Damascus, which then − as other factors came into play − escalated into full-blown civil war. That, in turn, has led to hundreds of thousands of Syrian refugees seeking a new life in Europe and elsewhere.

“The migrant crisis is not going to go away,” the report says. “The impact of widespread climate change and growing inequality is likely to exacerbate it in the years ahead.”

In China and in India, millions are involved in internal migratory movements. Over the last 35 years, nearly 200 million people in China have moved from rural to urban areas – the biggest movement of people in such a short timespan in history.

More than 50% of the world’s population now lives in cities, and the numbers are rising by the day. Cities, and how they are managed, will play a crucial role in how people adapt to climate change.

The media, says the EJN, usually gives only scant attention to such issues in its migration coverage. Reporting is often sensational or – influenced by rightwing and increasingly xenophobic political forces in many countries – talks loosely of the “threat” of migration and the supposed danger it poses to national identity and economic well-being.

A senior British politician, Lord Ashdown, warned recently that the migration the world is seeing now is merely a rehearsal for the future – unless climate change is tackled effectively.

The EJN says the world – and its media – has to understand that migration, both within countries and across borders, is an unstoppable process.

“No amount of razor wire or no matter how high walls are built, desperate migrants will find a way through. People will still flock to cities, drawn by the hope of a better life.”

This article was originally produced by the Climate News Network