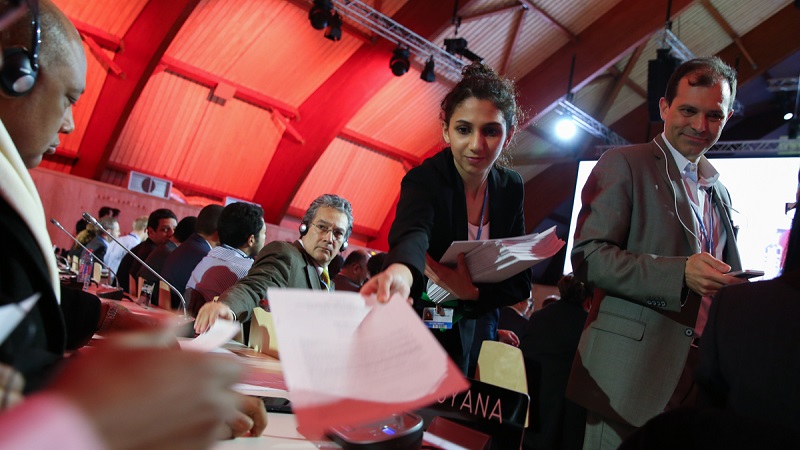 Draft Paris climate agreement being distributed (Photo by IISD/Kiara Worth)

A draft Paris climate agreement circulated on Thursday evening was well received by veteran observers of the talks.

“It’s clear they have made progress,” said Jennifer Morgan from the World Resources Institute, “but it is not over till it is over.”

The numbers of options for ministers to decide from has been radically reduced – a gamble from the French presidency of the COP.

The new version of a deal would commit 195 countries to slash net carbon emissions to zero in the second half of this century, involving radical cuts in fossil fuel use and a significant rise in deployment of clean energy and carbon capture technologies.

Linked to this is a new, ambitious goal of pursuing means of limiting temperature rises to 1.5C, a key demand of over 40 low lying and climate vulnerable countries, in addition to an effort to “hold the increase in average temperatures to well below 2C”.

Tony de Brum, foreign minister of the Marshall Islands and champion of a tight temperature goal, said: “With this, I would be able to go home and tell my people that our chance for survival is not lost.”

The new deal stressed developed countries “should” take the lead on greenhouse gas cuts, but also encouraged all countries to adopt tougher economy-wide emission cuts “over time”, in light of circumstances.

In a similar vein, the finance element of a text stipulates US$100 billion should be a “floor” of commitments from developed nations, but underlines the need for other emerging economies to contribute “on a voluntary, complementary basis”.

Jon Williams, partner at consultancy PwC, said: “On finance, this text is progress on previous efforts and seems the most ambitious of the previous three options.”

Still. Significant hurdles in the legally binding part of an agreement remain.

The tricky issue of loss and damage – support to address irreversible impacts of climate change – “is still not resolved,” said Michael Jacobs, an advisor to the New Climate Economy group.

This draft deal “denies the world justice,” said Adriano Campolina, ActionAid chief executive: “By including a clause for no future claim of compensation and liability, the US has ensured people suffering from the disastrous impacts of climate change will never be able to seek the justice owed to them.”

And it is not yet clear if a so-called ambition mechanism, involving a series of stocktakes and reviews from either before or after 2020, has the full support of all parties.

If included “this forms the basis of a strong series of cycles,” said Thomas Spencer from the Paris-based IDDRI think tank.

Past midnight in Paris for #COP21. Everyone working hard. A critical moment, an opportunity we can't afford to miss. pic.twitter.com/LoardSMd85