Exxon put on mock trial in Paris for ‘climate crimes’ 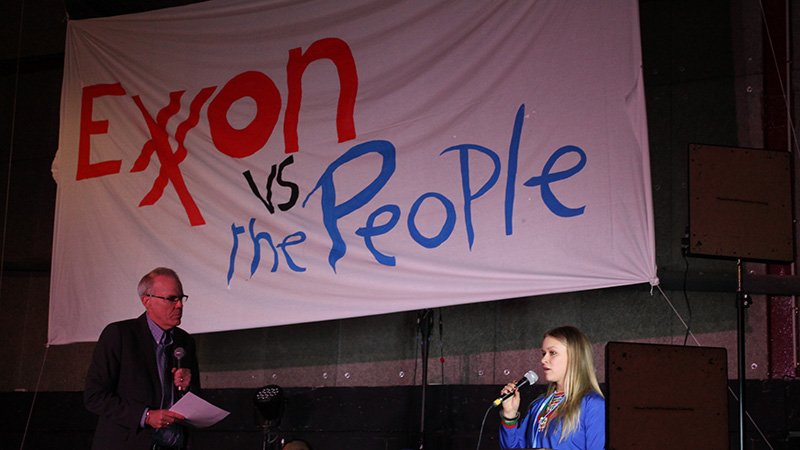 A community centre in a working class Parisian town turned court room on Saturday as Exxon Mobil became the subject of a two-hour tribunal by activists.

The world’s largest private oil explorer is under investigation by New York’s top lawyer over allegations it has lied to the public about climate change since the 1970s.

Just a few miles from a major UN climate summit, the stunt lacked the trappings of classic legal cases.

The defendant was absent. A white banner bearing the words “Exxon versus the People” flapped above judges’ heads. And rockstar environmentalists Naomi Klein and Bill McKibben took testimony from a line of witnesses.

A gallery of 250 people sympathetic to the environmental movement heard a damning rap sheet of the US energy giant’s alleged crimes against the planet.

Exxon’s “state of the art” research team recognised burning fossil fuels’ driving of global warming as early as the 1970s, said climatologist Jason Box. The revelations came out of an expose by Inside Climate News and the LA Times earlier this year.

The Texas-based company chose to cover it up, then actively discredit the scientific consensus, he charged. Think tanks were set up as vehicles to spread denial, and lawmakers funded to resist regulation.

Campaigners weren’t buying it. They moved on to set out the damaging legacy of Exxon’s alleged lies.

Climate change is a highly polarised topic in the US, for one thing. The country’s refusal to back legally binding targets in order to bypass a Republican-controlled (climate-denying) Senate is because of Exxon’s “campaign of misinformation,” author Klein told Climate Home after the event.

One by one, witnesses were summoned. Some were citizens of countries in line for devastating impacts like thinning ice sheets and rising sea levels. Others were climate scientists and energy analysts. 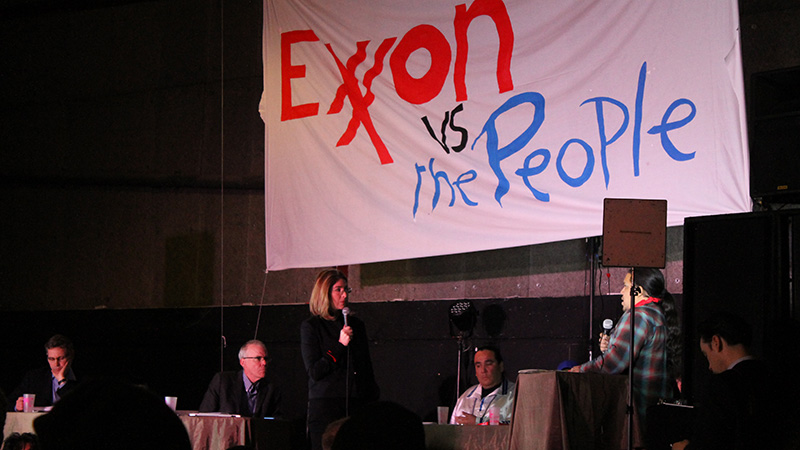 Naomi Klein speaks with a witness on Exxon Mobil’s environmental record in Texas, with judges to right (credit: Alex Pashley)

A reindeer herder from the Arctic told veteran campaigner and 350.org founder, Bill McKibben, of the perils of a warming Arctic. A Nigerian activist spoke of Exxon’s record of polluting base metals in the Niger Delta with impunity. And the founder of a investigate website to track the company took the court through its packaging of “doubt as a product”, much had tobacco firms had done.

“They are corporate serial killers,” said one witness from Louisiana, who said she was braced for storm damage after oil drilling had infringed on the state’s natural wetland buffer. The charges mounted.

Some testimonies read too fluidly to not be scripted. It was surreal, but it didn’t lapse into farce. Statements were broad and even-handed. A prominent biologist Sandra Steingraber submitted a report on the dangers of fracking for evidence.

“[E]xxon knew, as we know, early on precisely what the problem that we face was. That crisis has grown over those 25 years, but over those 25 years Exxon continued to maintain that architecture and ecosystem of denial and deception and disinformation.”

Klein said: “It is Exxon’s crime that it believes money trumps life… there is no price that can be placed on the Marshall Islands, on Arctic cultures, and lives of our loved ones and what we are able to pass onto our children.”

A straight-up ‘guilty’ ruling would have been too easy. Inconclusive was the fairest, given its empty chair, they ruled.

“The burden of proof now rests squarely on this corporation to somehow prove that the documents and memos don’t show what prima facie, they seemed to demonstrate, namely a profound disregard for the safety of the planet and its people,” said Sarsgaard.

“We render this verdict unanimously on 5th December of 2015, the hottest year yet measured on our Earth.”