On forests, the UN and indigenous people are worlds apart

Germany, Norway and UK lead forest protection announcements, but where are the real forest defenders at COP21? 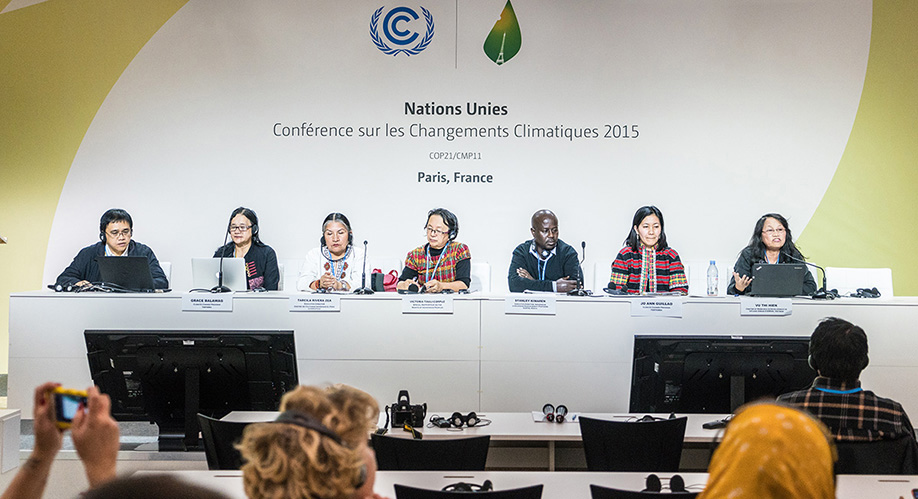 An event at COP21 on food security and adaptation to climate change for indigenous peoples. Few have gained accreditation to the Paris climate talks (credit: IISD reporting services)

On the cold tarmac of the UN tent city, indigenous dress clashed with a blur of business attire as Amazonian Indians milled around a mock Eiffel Tower.

With facial markings and feather headdresses, these were some of the few to gain accreditation to a climate summit on Paris’ heavily-policed margins.

They had travelled thousands of miles to have their voices heard.

Negotiators from 195 nations are grappling to clinch a new global climate agreement by the end of next week.

But the COP21, as it is known in UN lingo, is not theirs.

“It’s not an indigenous peoples meeting,” Abdon Nadaban, a leader from north Sumatra in Indonesia told me.

“We come here because we want the governments to discuss our problems.”

On Tuesday’s ‘Forests Day’, wealthy donor governments pledged cash to help counter tree-cutting. Germany, Norway and the UK aim to mobilise US$5 billion over the next five years and start a partnership with Colombia. More announcements are expected this fortnight.

The heir to the British throne backed a statement by 17 leaders recognising the “essential role of forests” for climate and development. Land titling of ancestral lands was the best weapon to stop deforestation, Prince Charles said.

More than a billion people depend directly on forests for their livelihoods. Each year, approximately 12 million hectares of forest are destroyed, an area the size of Nicaragua or North Korea.

Outside the main conference centre, groups from Southeast Asia and First Nations from Canada sat under hot lamps in the Indigenous Pavilion.

UN top representatives such as former Irish president Mary Robinson and its special rapporteur for indigenous affairs celebrated them as “guardians of the forest”. Canada’s new environment minister made a quick visit, then scarpered.

The problems were clear, but the solutions far harder.

As attendees spilled out of the wooden construction, Tashka Yawanawa from a community in the Brazilian Amazon told me he had come to highlight his community’s “life plan”.

“Planning into the future is preparing something to leave the new generation,” he said wearing a headdress of two foot-long exotic feathers. “Indigenous people were the first to protect the forest before people start to think about ecology.”

Across the ‘Climate Generation Area’, the Kichwa people of Sarayaku gave proposals for the protection of living forests in a new agreement.

Backed by advocacy group Amazon Watch, they have been locked in a legal fight with the Ecuadorian government over oil drilling in their territories.

Group  founder Atossa Soltani told me negotiations dealt in “siloed solutions” in tackling climate change rather than one picture.

“Indigenous peoples both know the traditional ways of living with the forest and have wisdom for humanity about how we relate to nature and how we should respect nature and see ourselves as part of the web of life,” she said.”That message is not here.”

One prominent way to tackle deforestation is an initiative that pays communities to keep trees in the ground and earn money from the carbon they suck from the atmosphere.

But many are wary of the Reducing Emissions from Deforestation and Degradation of forests (REDD+) scheme.

Juan Antonio Correa, a Chilean activist had come to attend a panel session opposing REDD+. Tricksters had duped indigenous groups into signing countries they didn’t understand, he said – and the environment is not a commodity to be bought and sold.

Nor did he feel involved in the COP21.

“We know what the Paris agreement will resolve is contradictory against our rights. We don’t want exploitation. We want true protection and the true solution to climate change, but nobody has asked the indigenous groups.”

Previous events in Lima, Peru and Rio de Janeiro, Brazil made for a stronger turn-out of forest peoples of the Amazon. In Paris, they were relatively isolated.

Even the UN Development Programme’s Equator Prize, which celebrates indigenous community initiatives on climate, reportedly failed to gain access for the majority of its winners into the confines of COP21.

If there was a metaphor, this was it.