Small island leaders cautiously welcome US move to shield them from threat of rising seas, but say more is needed in a Paris deal 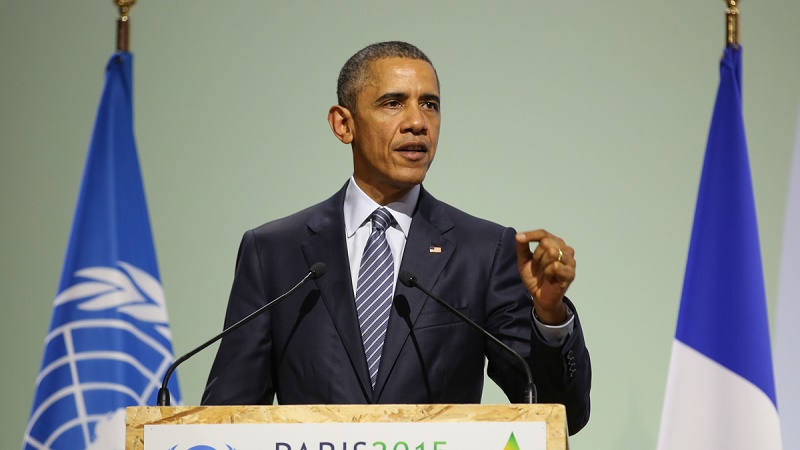 The US will contribute US$30 million to help insure vulnerable communities against climate risks, President Barack Obama announced in Paris on Tuesday.

It was his offer to leaders of small island states at a meeting on the sidelines of COP21; an attempt to bridge deep divisions on the shape of a UN climate pact due to be finalised next week.

“I am an island boy,” he said as they assembled for a photo, recalling his childhood in Hawaii and Indonesia.

“The meeting was a chance to talk, at a very personal level, about how vulnerable we are to climate impacts, and that we all need to work together to tackle what is now the gravest risk to humanity,” said Marshall Islands’ president Christopher Loeak.

“After what President Obama said to me today, I am more confident than ever before that we can secure the ambitious agreement we need.”

“It’s a sign of progress in Paris,” he said. “We now encourage our partners to recognise the full scale of the challenge we face and help us tackle it together.”

Anote Tong, president of Kiribati, a low-lying string of coral atolls home to 100,000 people, outlined what a Paris deal meant to him. “For some countries, it is about their industries being affected but for us it is about our survival,” he said. “I am always trying to explain to people the difference between a drop in your GDP and the loss of your home.”

In his speech to world leaders on Monday, President Obama acknowledged the damage wrought by global warming, not just for islands but closer to home.

He said: “This summer, I saw the effects of climate change firsthand in our northernmost state, Alaska, where the sea is already swallowing villages and eroding shorelines; where permafrost thaws and the tundra burns; where glaciers are melting at a pace unprecedented in modern times.”

This was reinforced in a side event at the US pavilion, where a delegate from the northernmost state swapped notes with a Marshall Islands representative.

Maija Lukin, a half Finnish, half Eskimo resident of Alaska, explained how thinning sea ice was jeopardising her culture. Her 12-year-old daughter would never learn to hunt seals as she did, because it was no longer safe to cross the ice. And in a state where the cost of living is high, it cut off an important food source.

But where Americans talk about “resilience” in the face of such changes, vulnerable states talk about “loss and damage”.

After a clear rebuff from developed countries, island states have dropped demands for compensation. But they are insisting on a separate section in the Paris deal on support to cope with their losses.

It is particularly pressing since major emitters show no signs of backing another of their asks: a tighter target for limiting global warming, to 1.5C instead of 2C.

Enele Sopoaga, prime minister of Tuvalu, said: “All we are seeking is some assurance that we will be properly protected and saved. There is no indication here we are going to sue you.”

Insurance is a middle ground. Obama’s $30m forms part of a G7 initiative to extend insurance cover to 400 million people on the frontlines of changing weather patterns.

Another part of the picture is people relocating to safer ground, potentially across national borders. Kiribati has already bought land in Fiji as a contingency, for example.

President Tong rejected the phrase “climate refugees,” preferring “migration with dignity,” he said. “It is about preparing your people, training them, giving them the qualifications so that they can migrate and find jobs and become an integral part of the new community, not a burden.”

That is still to play for in the negotiations. Sopoaga was wary of the outcome: “There will be twists and turns and we have to be watchful. Once you blink, the paragraph will be concluded, we don’t have anything to take home for Christmas.”