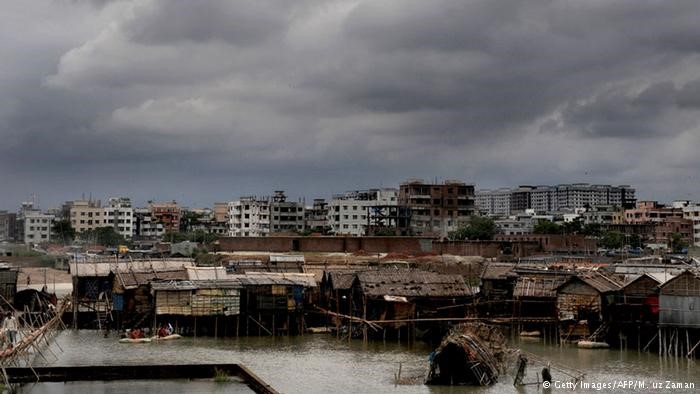 With multiplying impacts of climate change – increasing floods, cyclones, and drought – thousands of climate refugees are migrating to Dhaka. And the city, well beyond its carrying capacity, is bursting at the seams.

The word most often associated with Dhaka, the capital of Bangladesh, is perhaps, “overpopulated.” Supporting more than 14 million people on less than 325 square kilometers (125 square miles) of land, the city’s drainage, waste management and transportation infrastructure is on the brink of collapse.

Against that backdrop, it is hardly surprising to find the Bangladesh capital among the worst cities to live in on the Economist Intelligence Unit’s 2015 ranking.

To delve beneath the apparent reasons – overpopulation, waterlogging and congestion – is to reveal a major underlying cause: unsustainable levels of climate-induced displacement and migration.

And the problems are washing up along Bangladesh’s 700 kilometers of low-lying coast. Rising sea levels and cyclones heighten the risk of flooding, while riverbank erosion and seawater intrusion are set to have a devastating impact on the nation’s population.

Report: Climate change to wipe 2% off Bangladesh GDP by 2050

“Over the next two to three decades millions of people will no longer be able to live and earn their livelihoods from farming and fishing as they are now,” said Saleemul Huq, a senior fellow with the Climate Change Group of the International Institute for Environment and Development.

Conversely, prolonged droughts are affecting arable land by causing soil erosion and damaging crops that depend on predictable monsoon patterns.

The Intergovernmental Panel on Climate Change (IPCC) estimates 20 million people will be displaced in Bangladesh in the coming five years. That is more than the cumulative populations of Los Angeles, Chicago and New York City. And this should be very worrying.

Even now, many of the half-a-million-plus people who move their families – along with their hopes – to Dhaka, are driven there by the effects of climate change.

No streets paved with gold

But the Bangladeshi capital, which teeters on less than 1 percent of the country’s overall landmass, is far from being the promised land.

The combination of explosive population growth and land scarcity has sent its property and rental prices through the roof.

And given that most climate refugees come from humble financial backgrounds, they are left with little alternative but to join the estimated 3.4 million people who already live without gas or electricity in cramped and substandard squatter settlements, known as bosti.

Even in their new homes, they cannot escape the environmental disasters that drove them to seek shelter in the flimsy shack-like houses in this low-lying city on the banks of the Buriganga river. 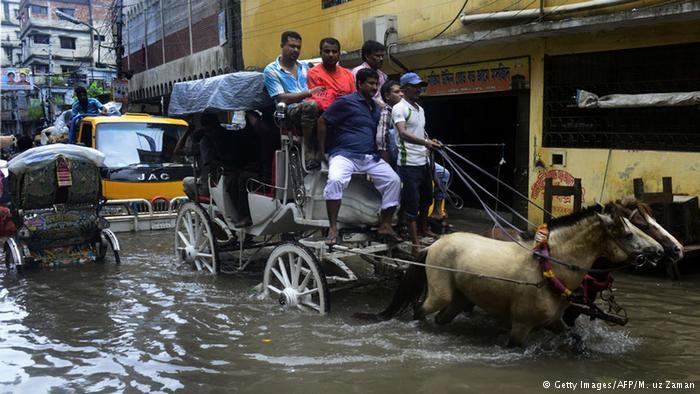 A flooded street in Dhaka

The incidence of flooding in Dhaka is increasing, and the lack of water and sanitation facilities means waterborne diseases such as diarrhea and typhoid are widespread.

But health and pollution are not the only problems bosti-dwelling climate migrants face. Rahmat Ali, a resident of Dhaka’s biggest slum Korail, moved to the city when saltwater logged his farmland. Once an agricultural worker, he now scrapes out a living as a rickshaw puller.

“It is very hard work for little money. But there are few options for the likes of us, who have lost our lands and homes, and now have nothing left to go back to.”

Slow response to an urgent problem

With ubiquitous bostis and climate refugees dominating the cityscape, more affluent Dhaka residents are becoming increasingly desensitised and apathetic to their plight, and are coming to accept it as the norm.

This apathy is reflected in the country’s policy sphere. “People are migrating to cities because the nation is not responding to their risks,” says Aminul Islam, a member of the National Displacement Strategy Working Group under the Ministry of Disaster Management. 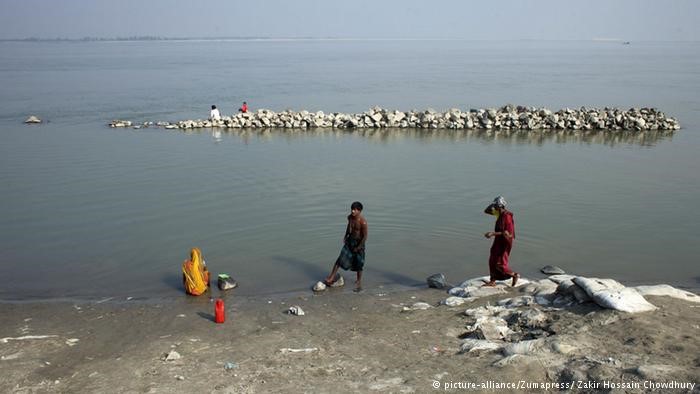 Coastal and river erosion is a major problem in Bangladesh

While Bangladesh has developed a solid strategic framework for tackling climate change – including its National Action Plan for Adaptation and the Bangladesh Climate Change Strategy and Action Plan – it has not yet prescribed any adaptation programs specifically addressing climate-induced internal displacement.

And that, thinks Islam, is a failing.

“The country needs a long-term vision and adaptation plan for reducing displacement,” Islam said. “The provision of climate resilient habitat, livelihood opportunities and civil facilities for the vulnerable will reduce incentives to migrate to cities.”

Even if Bangladesh were to increase its adaptation efforts 100-fold, it can only go so far in protecting its people. From a Bangladeshi point of view, what it desperately needs are mitigation efforts by major carbon-emitting nations.

At the end of November, the world’s leaders will congregate in Paris to try and achieve a universal, binding agreement for combating climate change. And for the millions of people living in vulnerable countries such as Bangladesh, their success at the negotiating table is crucial.

The situation in Dhaka illustrates how climate change is neither something that affects only polar bears, nor a problem only for future generations. Many fear that failure to act now will render the Bangladeshi capital a precursor for wholesale climate catastrophe.

This story was sourced through the Voices2Paris UNDP storytelling contest on climate change and developed thanks to Tamsin Walker and @DeutscheWelle.