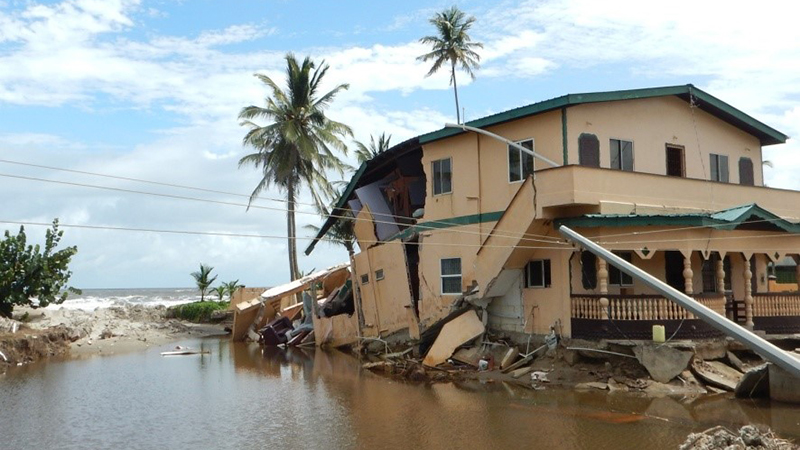 Coastal damages in the aftermath of the floods (photo credits: Rajiv Jalim)

As unusually heavy rainfall battered Trinidad’s east coast a year ago, a lagoon here was overwhelmed, flooding a major access road to the island’s south-eastern communities.

As the flood waters poured over Manzanilla beach, they washed sand away, caved in sections of road and collapsed a seawall at a tourist beach facility. Further damages were also incurred with the flooding of homes and agricultural plots.

The coastline of Trinidad is under threat as seas rise, storms grow heavier, and as sand is washed away. As iconic coconut trees are lapped by an encroaching sea, some of the dangers of climate change are becoming clear.

Seas in the region have been rising by more than 2 millimeters every year — though scientists are still trying to pinpoint the role of climate change in accelerating local beach erosion.

“On Manzanilla beach the sea is definitely getting closer to the land, but the primary reason may not be land deformation or sea level rise,” said Keith Miller, a senior lecturer and researcher at the University of West Indies.

“The Atlantic swell causes longshore drift and beach sediments move southward,” Miller said. “Research has been done to suggest that the sediment source has dried up to some extent, so material is being moved along the beach, but there is less material available to replace it.”

In addition to the problems on the east coast, Trinidad’s south-western peninsula is experiencing rapid erosion. Despite being sheltered from the open ocean, satellite images have shown large portions of it being lost to the Gulf of Paria.

According to the World Bank publication Turn Down the Heat, Earth is locked into at least a 1.5°C rise in temperature compared with pre-industrial times. Rising seas caused by rising temperatures, coupled with projected increases in the intensity and frequency of storms and hurricanes, which also affect wave energy, are expected to accelerate coastal erosion. Such effects are of grave concern for small island developing states (SIDS).

With Trinidad’s east coast sustaining several developing communities, through income from tourism, agriculture and fishing, management of the coastline — which is also a nesting site for endangered leatherback turtles — is of utmost importance. 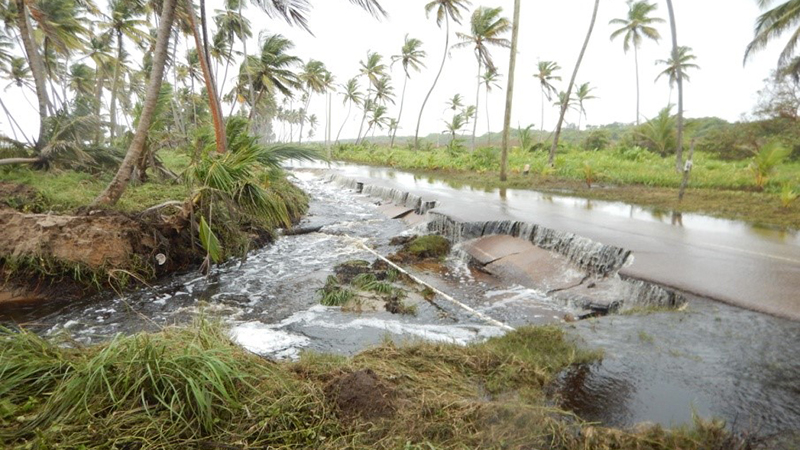 Subsequent to reports of the extensive damage at Manzanilla, emergency services responded through a coordinated effort between government agencies and ministries to bring relief to those affected.

Disaster management and response units, including the local Risk Reduction Management Centre, assisted residents by providing basic supplies to flood victims, while personnel from the University of the West Indies conducted site visits to assess the damage and collect data. The Ministry of Works was involved in trying to reconnect the main access route to the south-eastern community.

At an estimated cost of $US5.8 million, the rehabilitation work combined the expertise of academics and researchers with coastal management organizations and engineering firms, both local and international.

One year later, key learnings are still being generated from data collected after the event. It is from these analyses that gaps in the coastal management plans and developmental strategies for the east coast can be identified.

Perhaps the most significant gap has been the lack of sufficient hydrological and maritime data for the island, which could be used to develop models and improve the predictive power for rare disasters.

Extraordinary events such as the Manzanilla flood occur infrequently, but they can cause significant and expensive damage when they do occur. Predicting and preparing for such events based on scientific knowledge can reduce not only their impacts, but also the recovery time.

Looking beyond Trinidad to the wider Caribbean region, and to other islands across the world, coastal erosion linked to climate change can be extremely dangerous.

Experts say long-term strategies should go beyond revetment and seawall repairs, and consider policy support, planning strategies and contingency mapping. Additionally, there is a need for increased public-private partnerships across the globe, where resources, creativity, expertise and innovation can be expanded and exchanged to deal with coastal management in a sustainable manner.

“I’m more on the side of investing in state-of-the-art, long-term monitoring and innovative research,” said Christopher Daly, lecturer in the Civil & Environmental Engineering department of the University of the West Indies.

“There is no real profit to be made from this so it’s difficult to get private investment,” Daly said. “This has to be funded through a national or regional science board that has the long-term interest of society at heart. It also has to have full government support but be independent of political influence.”

Small island developing states have also been calling during the United Nations climate negotiations for a “loss-and-damage mechanism,” which could help poorer countries cope with flooding and other impacts of climate change. The concept was first proposed more than two decades ago, but the wealthier countries that would be expected to provide the funding have opposed it.

In the meantime, the hastily built seawall, boardwalk and main road on the Manzanilla beach will again have to stand the test of the Atlantic and the effects of climate change. Only time will tell if feats of engineering can withstand the changing environment, or if the island of Trinidad will be left to slowly erode into rising seas.

This story was sourced through the Voices2Paris UNDP storytelling contest on climate change and developed thanks to John Upton and @ClimateCentral.