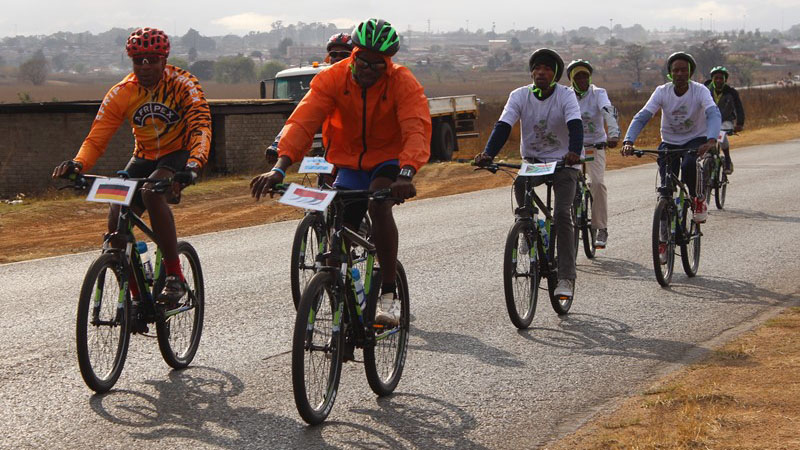 Teams of 21 Cyclists cycle from Witbank to Tshwane in South Africa in September alluding to the UN’s 21st climate change summit, or COP21. (Credit: We Have Faith Act Now For Climate Justice)

On Saturday, a lycra-clad troupe on two wheels will roll into Kenya’s capital.

With 6,500km on the clock and over 320,000 signatures in hand, teams from the Ugandan and Tanzanian borders make their grand arrival in Nairobi.

Their petition demands a “fair and legally-binding” climate agreement that shields the continent from the wrath of a warming planet.

It’s timed with a grassroots gathering to project the voice of 1.2 billion Africans ahead of UN talks next month in Paris, known as the ‘social pre-COP’. 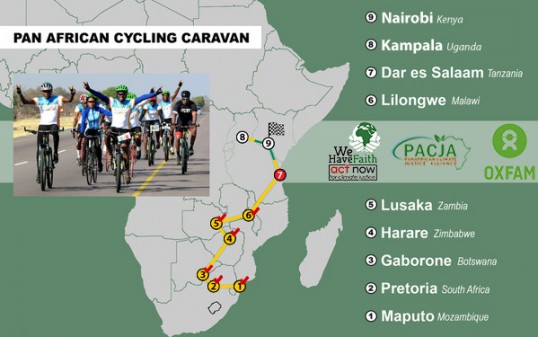 Starting in Mozambique in late August, the Caravan for Climate Justice has pootled into towns and cities across nine countries to raise awareness of climate impacts.

“We are deeply concerned by the threats posed by climate change to the peoples of Africa,” reads the petition.

It is braced to be one of the hardest hit regions as droughts and erratic rainfall risk crop failure, resource conflict and deepening poverty. Yet its share of global carbon emissions is miniscule.

That is why they want to see temperature rise capped at 1.5C and evidence of cash for adapting to an overheating planet.

The UN estimates African countries will need US$35-50 billion a year by 2050 to prepare for impacts like drought and flooding.

Climate frontline: The Kenya province counting on a Paris deal

In Sub-Saharan African countries, a median of 59% surveyed said they were very concerned about climate change, according to a July report by Pew Research Center.

“Cycling doesn’t emit and people can easily interact with them,” said Mwangala Mugamangi, the campaign’s media officer by phone from Nairobi.

“We are raising awareness of climate change and the importance of COP21 in Paris.”

Report: Meet the climate scientists running and cycling to Paris

The endeavour has energised individuals to promote green policies at home.

A Zambian cyclist and former charcoal seller, Allen ‘Super1 Chipolopolo’ Namukamba said he would set up his own club and campaign against logging, following the experience.

Zimbabwe’s environment minister signed the petition in Harare as the country’s ‘super six’ cyclists from the Flying Eagles team arrived.

“2014 was recorded as the hottest years since weather recording started in 1880,” Oppah Muchinguri-Kashiri reportedly said.

“The intensification and frequency of this changing climate does not afford us to sit back and relax.”