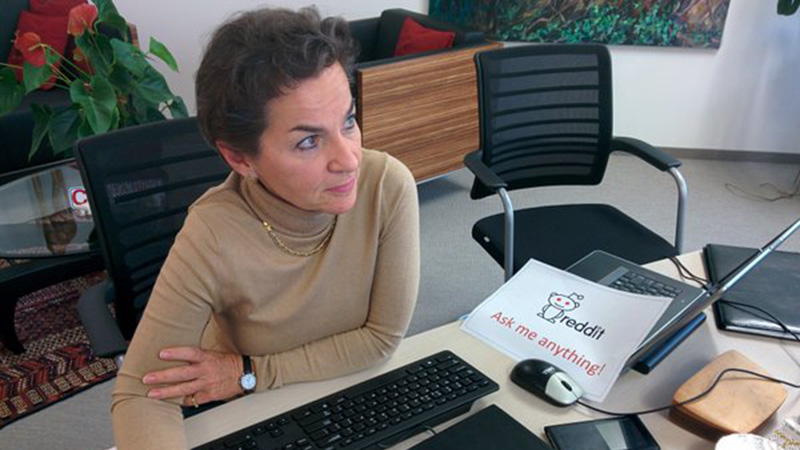 The diplomat steering UN climate talks put herself at the mercy of the internet on Wednesday.

Christiana Figueres followed in the footsteps of Barack Obama, Buzz Aldrin and the Big Bird puppeteer with her maiden AMA on Reddit.

It’s a month before envoys thrash out a new climate deal and all eyes turn to the two-week Paris gathering.

At the helm of the UN climate body since 2010, Figueres came across more guarded than Bill Murray but more lively than Morgan Freeman. There were some provocative questions, but nothing like the abuse heaped on Ann Coulter, the US political commentator.

She carries a blue marble in her pocket to remind her of the oceans, she buys carbons offsets for her air travel and she gets “frustrated” but not depressed.

Here’s a selection of responses.

On barriers to Paris success

I am optimistic for Paris. We have so much momentum going into this conference from the past 5 years of progress in the negotiations and from the businesses, investors, cities and regions that are already engaged in climate action. The greatest barrier to success will be in the details – how the interests of all countries will be reflected in the final text and decisions. Also, finance and technical support for the transition in developing countries will be a big challenge.

On climate refugees in a new accord

If we do not do our job properly, we will have painful situations of forced migration. Perhaps to a scale we cannot even imagine. That is precisely why it is so urgent that we agree on a path to reduce global emissions within the boundaries of science.

The expansion of urbanization and growth of cities in the future is well known. What is less understood is how we can plan and develop cities that are more organically grown and lived in than built and operated. If we look at future cities from the atmosphere’s perspective lived-in gardens, not expansive Lego-scapes.

On the 2C temperature goal

I have been pellucidly clear that the agreement in Paris is not going to reach a 2 degree limit on temperature rise as though that were something we can take off a magical shelf and put on the table. I have been equally clear that getting us on to the 2 degree pathway is entirely possible. This is why the Paris agreement will have two very important components with regard to emission reductions: First, it will harness all the national climate change plans which as a group, if fully implemented, already substantially reduce the BAU growth in emissions. Second, in recognition that this first set of INDCs is a departure point and not a destination, the Paris agreement will construct a path of ever-increasing emission reductions with periodic checkpoints of progress until we get to the 2 degree pathway.

On oceans’ role in a deal

The Climate Change Convention is structured based on emissions of greenhouse gasses within national territories. Despite the fact that oceans are being directly affected by rising temperatures, they are not included in the Convention or in the negotiations due to their transboundary nature. This does not mean we can forget about the oceans. I permanently carry a blue marble with me everywhere I go to remind me of the oceans.

The use of nuclear energy is a decision that is and remains a sovereign responsibility of each country. It is clearly a non-GHG emitting source, however in its use every country will have to consider the other potential consequences as well as the rising cost of additional safety measures that have now been proven to be necessary.

The role of civil society in continuing to encourage ambition expressed in both environmental integrity and social fairness is critical to all our negotiations. At the same time, the UNFCCC is an intergovernmental treaty body designed for the purpose of governments reaching common ground with each other. Over the past 5 years, we have consistently increased the transparency of the intergovernmental process by providing constant and timely information about the proceedings on our website and by encouraging frequent and open stocktaking plenaries. We have also not only allowed but frankly even supported actions on the part of civil society representatives as long as they stay within the agreed rules of conduct.

Yes I am very conscious that I am personally a high emitter given the air travel that I have to do for my job. (…) As long as I have the responsibilities that I do, I have to incur these emissions but that will not be my lifestyle forever. In the meantime, in order to be climate neutral and support mitigation and adaptation projects in developing countries, I have purchased Certified Emissions Reductions from the Adaptation Fund using the Climate Neutral Now program http://climateneutralnow.org/SitePages/Home.aspx) and I encourage everyone to do the same, as well as making low-emission lifestyle choices.

I don’t get depressed but I do get frustrated with the pace of progress. I stay focused because of my daughters and all the sons and daughters to come.