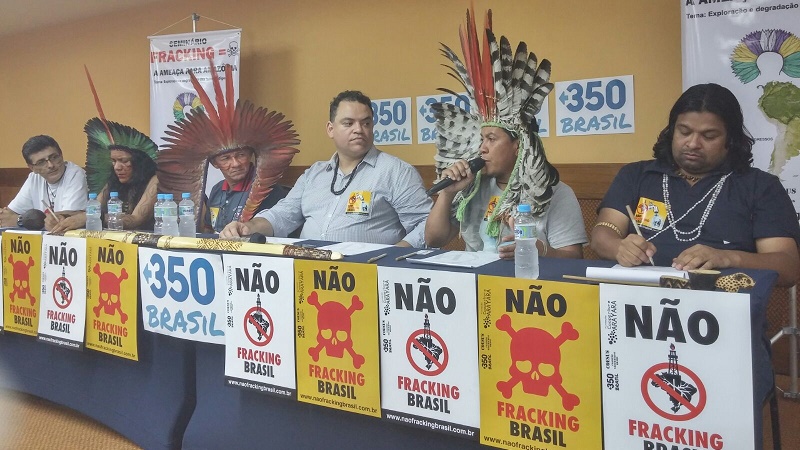 Anti-fracking campaigners have claimed victory in Brazil after an auction of blocks for oil and gas exploration fell flat on Wednesday.

The government sold rights to only 37 of 266 blocks on offer, raising R$121 million (US$31.4 million), well below official expectations.

International oil majors including ExxonMobil, BP and Shell had registered for the 13th bidding round, but walked away empty-handed.

It was left to 17 smaller companies, mostly Brazilian, to pick up a handful of concessions each.

But extracting it is controversial, particularly where that involves disrupting pristine rainforest or impinging on indigenous territories – as the latest offers did.

Fracking or hydraulic fracturing involves pumping water and chemicals at high pressure into shale rock to force oil and gas out.

At the event in Rio de Janeiro, protestors spoke of their concerns about the environmental and health impacts of fracking.

Nine indigenous chiefs attended to register their objections to hydrocarbon extraction in the Amazon rainforest.

“Let nature be happy, so we can also be happy,” shaman Luiz Puyanawa said in a statement.

Last Saturday, they had “fracktivists” picketing Brazilian embassies in the UK, Portugal and Spain, as well as demonstrating in a number of Brazilian cities.

And buyers from the last auction in 2013 have been unable to start production as opponents are fighting them in the courts.

Some indigenous peoples have experience the impact of fracking in Peru, she told Climate Home, noticing pollution in the rivers.

Fracking has been associated with methane, a potent greenhouse gas, leaking into the air or water, although the impacts are disputed.

“It is a vicious circle”, de Oliveira added. “When climate change gets worse and water scarcity gets worse, the only source of water will be contaminated.”

Weak demand for fracking rights may also reflect tough global conditions for oil companies, which are scaling back investment amid low oil prices.