US president confident Paris will see climate deal, thinks pace of carbon cutting will accelerate once structure is in place 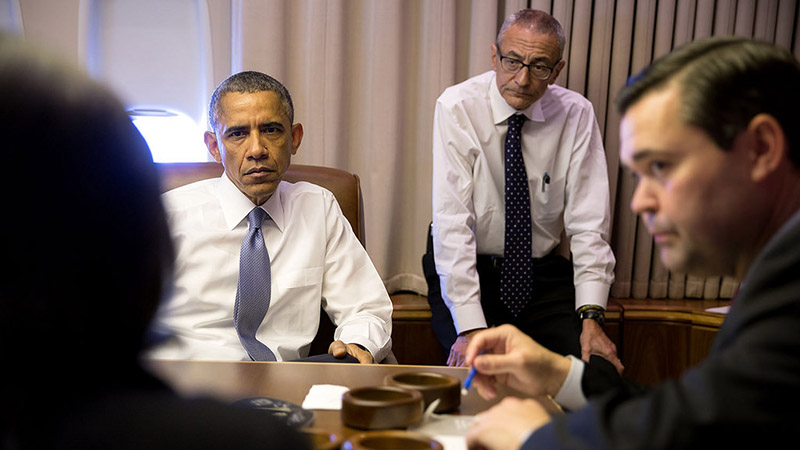 US president Barack Obama is a man in a hurry. That, at least, is the impression gleaned from an interview with Rolling Stone magazine, published today.

The full article is well worth a read. Jeff Goodell spent an hour with Obama during his recent trip to Alaska, made to highlight his climate change concerns.

Time and time again the phrase “not fast enough” crops up, a sign of the frustration the world’s most powerful man feels about the sluggish nature of global climate talks.

Goodell and Obama discussed the ill-fated 2009 Copenhagen summit – a meeting the president appears to think he saved.

Obama also defends the decision to allow oil exploration in the Arctic, explains why fracking is ok, and outlines his hopes for this year’s Paris climate summit.

Here are six key takeaways from the interview:

“Copenhagen, although it was a disorganized mess — and I still remember flying in that last day, and nothing was happening, and I literally had to rescue the entire enterprise by crashing a meeting of the BRIC countries [Brazil, Russia, India and China] and strong-arming them into coming up with at least a document that could build some consensus going into the future.”

“My attitude… is that if we get the structure right, then we can turn the dials as there’s additional public education, not just in the United States but across the world, and people feel a greater urgency about it and there’s more political will to act.”

Shell and the Arctic

“The fossil-fuel economy is deeply entrenched in the structure of everybody’s lives around the world. And so from the start, I’ve always talked about a transition that is not going to happen overnight. And regardless of how urgent I think the science is, if I howl at the moon without being able to build a political consensus behind me, it’s not going to get done.”

“The science tells us that if done properly, fracking risks can be minimized. And natural gas is a fossil fuel, but the reason we’re not seeing coal-fired plants being built in the United States is not just because of the clean-power-plant rule — because we just put that in place. The reason is it wasn’t economical because natural gas was so cheap. And we have to make those choices.”

What’s the key for Paris?

“Making sure everybody is making serious efforts and that we are making a joint international commitment that is well-defined and can be measured will create the basis for us each year, then, to evaluate, “How are we doing?” and will allow us, five years from now, to say the science is new, we need to ratchet it up, and by the way, because of the research and development that we’ve put in, we can achieve more ambitious goals.”