We have lift-off: Experts call for green growth boost at Paris 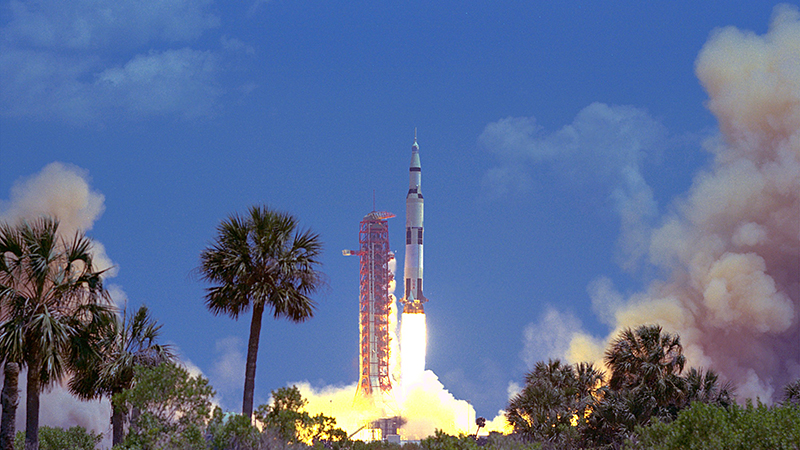 Apollo 16, the fifth space vehicle to make a lunar landing, takes off in 1972 from Kennedy Space Center (Flickr/ Stuart Rankin)

Prominent scientists, business leaders and economists have urged countries to back a clean energy project that emulates the race to put a man on the moon at a crunch climate summit later this year.

27 leading figures signed a letter on Wednesday supporting the Global Apollo Program, which intends to make renewable electricity cheaper than its coal-fired generation over the next decade.

“We urge the leading nations of the world to commit to this positive, practical initiative by the Paris climate conference in December,” it said, carrying the signatures of naturalist David Attenborough, economist Jeffrey Sachs and Unilever CEO Paul Polman.

The plan is the product of a group of UK figures including Sir David King, the country’s climate change envoy, and economist Lord Nicholas Stern.

Just 2% of public funded research and development is invested in clean energy and the private sector too spends little, they say.

Almost 200 nations are crafting an agreement to cap warming by 2C, expected to be signed at the summit in December.

But national carbon-cutting pledges are so far insufficient to avoid dangerous climate change, as countries chafe at shifting their economies off abundant fossil fuels.

Ramping up R&D on technology like smart grids and energy storage are key to making an economic transition to clean energy, the programme’s leaders argue.

We the undersigned believe that global warming can be addressed without adding significant economic costs or burdening taxpayers with more debt.

A sensible approach to tackling climate change will not only pay for itself but provide economic benefits to the nations of the world.

The aspiration of the Global Apollo Program is to make renewable energy cheaper than coal within 10 years. We urge the leading nations of the world to commit to this positive, practical initiative by the Paris climate conference in December.

The plan requires leading governments to invest a total of $15 billion a year in research, development and demonstration of clean energy.

That compares to the $100 billion currently invested in defence R&D globally each year.

Public investment now will save governments huge sums in the future.

What is more, a coordinated R&D plan can help bring energy bills down for billions of consumers.

Just as with the Apollo space missions of the 1960s, great scientific minds must now be assembled to find a solution to one of the biggest challenges we face.