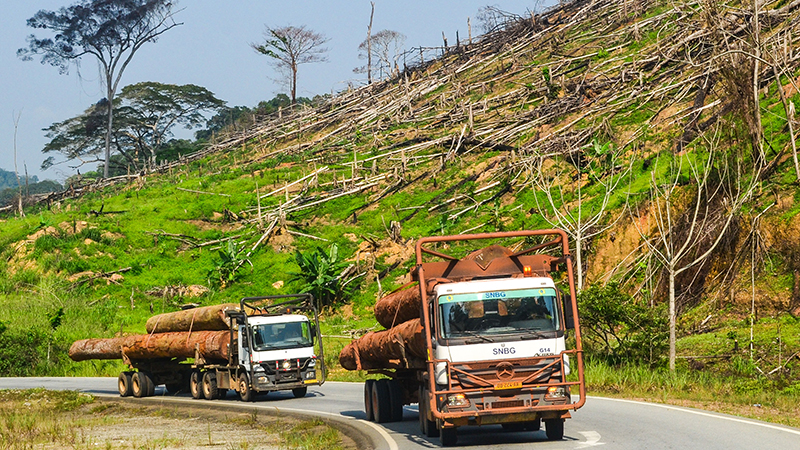 Logging trucks in Gabon. 1.3 billion people in Africa live in or near to forests (Flickr/ jbdodane)

Tropical countries’ zeal for cash crops may stoke land grabs and illicit logging, but some may see it as a price of prosperity.

That thinking is flawed, charges a new report, as states grossly overlook the economic and environmental value of smaller “forest producers” displaced by agribusiness.

But governments must provide financial support or risk losing carbon-rich forests forever, according to the forest wing of the UN’s Food and Agricultural Organization.

“It’s no question there is a lot of conversion of natural forests and displacing of indigenous or local communities from lands where they frequently manage it well,” Jeffrey Campbell, manager of the Forest and Farming Facility, tells RTCC.

“Whether the state crops need to be grown in such big monocultures is a huge argument. A vast number of smallholders plant trees and other things in a complex landscape mosaic, which are probably equally effective and include far more businesses in the picture.”

Territories almost twice the size of Texas – about 1.3 million square kilometres  – have been acquired in sealed and impending land deals over the last 15 years, according to Land Matrix.

Deforestation, the loss of land rights and arising conflict displaced 59 million people worldwide in 2014, with one third in Africa, the report says.

Forest clearance shunts communities to the countryside and margins of cities, hollowing out rural economies and contributing to climate change through higher carbon emissions.

The report will make the business case with examples of ventures in Burkina Faso, Ethiopia and Gambia at the World Forestry Congress in Durban, South Africa on Monday.

Held every six years, the major industry event will set out a vision for forests aligned with climate change and sustainable development goals.

Freeing up international cash to support restoration projects and controlled forestry is vital. Tree-planting initiatives are working in Vietnam and China, but are limited, Campbell adds.

The UN-backed Green Climate Fund could be one source, though countries needn’t be reliant on the richer world. Contributions from neighbours in the Global South could sooner fund it.

Forcing governments to scale back agribusiness is difficult, though discussions of zero deforestation by large land-use emitters and progress on REDD+, a UN-backed forest protection programme, are encouraging, says Campbell.

“We are definitely moving forwards, but it’s an unfinished agenda. Without [smallholders] it’s very hard to guarantee the large natural forests will be able to be maintained.

“The bottom line is they are the solution, invest in them and we can get those positive outcomes.”