Can Merkel’s visit to Brazil make waves for climate action? 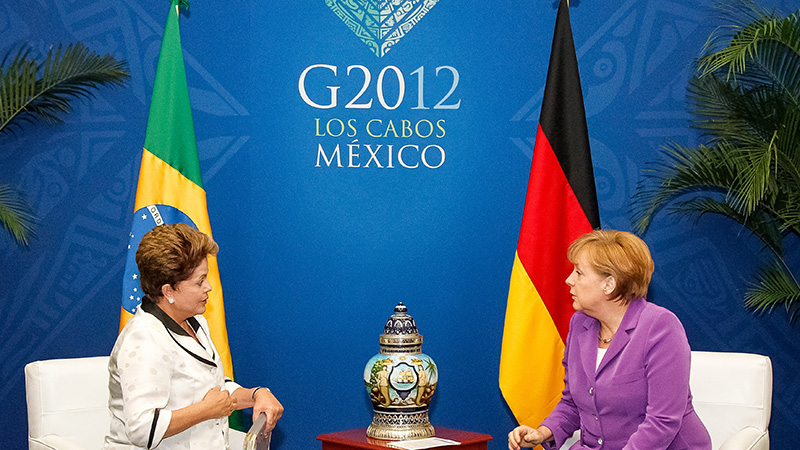 Last week German Chancellor Angela Merkel jetted in to the Brazilian capital, Brasilia, with over half a dozen ministers to hold a bilateral meeting with embattled President Dilma Rousseff.

Germany and Brazil cooperate extensively on green issues and this meeting did not disappoint with the launch of a joint statement on climate change.

Here four analysts assess the importance of the visit for UN climate talks in December; how it could impact Brazil’s climate debate; and the prospects for Germany diplomacy to help Brazil and the EU work closer in Paris.

Chancellor Merkel’s visit crystallised the announcements made at the June G7 meeting when it announced its determination to reach a new global climate agreement and the need to decarbonise the global economy by 2100.

Brazil has endorsed this vision that a long-term goal is needed. However, this time frame is too late to secure the UN Climate Change Convention’s core objective to stabilise greenhouse gas concentrations at a level that would prevent dangerous climate change.

There is a significant chasm between rhetoric and reality

Germany has renewed its commitment for environmental and climate actions in Brazil assigning over €1 billion, which could influence Brazil’s post-2020 national climate plan. But Brazil’s current stance on climate is uncertain and there is a significant chasm between rhetoric and reality.

While President Dilma announced her support for global decarbonisation her administration recently launched two massive investment programs on energy and infrastructure which appear to pay little attention to increasing resilience to climate impacts or avoiding a surge in emissions.

Preparations for the Paris climate conference are benefiting from the engagement of various leaders including from the US and China.

Yet a chief sticking point remains how differentiating responsibilities on emission reductions between developed and developing countries will be tackled.

The visit had a limited impact on the current trajectory of the UN climate negotiations. However, the Brazilian – German Joint Statement on Climate Change does include a reference to the decarbonisation of the global economy by 2100 in order to limit global warming to 2°C which is significant.

This is the first time the Brazilian government has referred to ‘decarbonisation’ in an official communiqué.

Despite these important global exchanges, Brazil is in the midst of acute political and economic crises. The lack of concrete measures being taken by the Rousseff administration to boost renewable energy and energy efficiency provide a sobering reminder that these international meetings have a limited impact on the national climate agenda especially while it languishes so far down the list of domestic priorities.

It is an important step that Merkel was able to encourage Brazil to start talking about decarbonisation which can help intensify dialogue between Brazil and the EU on climate change.

Yet Brazilian officials have consistently stated that Brazil remains a developing country that has already significantly and voluntarily reduced its emissions; and that it has the right to choose its own development path including the possibility of increasing its emissions over time.

Therefore, Brazil will likely be an active and constructive diplomatic player in Paris but it will probably not be willing to increase its climate ambition.”

Merkel’s visit was largely insignificant given the depth of Brazil’s ongoing economic, political and moral crisis.  Germany is a global leader on climate change and since the 1990s has had a positive influence on Brazil’s environmental and climate politics.

Over a hundred German corporations are well-established in Brazil and these corporations have tended to have a more progressive climate and environmental policy than their foreign or domestic counterparts.

Previously, Germany had a positive impact on the Brazilian climate change debate. However, on this occasion there has been little impact. Brazilian society is currently consumed by a political crisis.

Brazil is strongly committed to the BASIC group and G77

The economic situation is also dire with high inflation, and an alarming contraction of economic growth.

German diplomats (and their EU partners) will attempt to bring Brazil closer to the European position but they will struggle given President Dilma and other decision makers are strongly committed to the BASIC group with China, Indian and South Africa, and the G77.

Following Merkel’s visit Brazilian actors including NGOs, academics and progressive corporations, which are advocating for low carbon development, will be empowered but likely not to the point where they will significantly influence the government’s positions for Paris.

A meeting between leaders from two of the world’s most important countries for climate action a few months before Paris is a positive indication of the political capital being invested in the process.

The visit complements President Dilma’s trip to the US where she and Obama also discussed climate change. These meetings remind us that Brazil could make or break a new climate deal.

It has made substantial efforts to stem deforestation and related emissions and is also taking important steps on renewables. However, emissions are increasing fast in the energy and agricultural sectors raising fears that Brazil will rest on its laurels and not offer up an ambitious national climate plan or ‘INDC’.

Brazilian society is transfixed by internal crises ensuring the climate agenda is a low priority. The Dilma administration, Brazilian Congress and powerful political and economic actors are not interested in a low-carbon transition ensuring that Merkel’s visit had limited impact.

Yet, as Dilma pushes her austerity agenda, which is cutting funds for climate-related measures, the announcement of €1 billion in German financing and loans for green programs is significant.

The decarbonization goal is a useful point of convergence for EU negotiators to engage with Brazil, and also to build confidence for tackling tougher issues including climate finance. Brazil attempts to portray itself as a champion of developing countries’ rights to develop while ensuring it avoids taking on emission reduction commitments it deems a threat to its interests.