Activists to halt diggers at RWE coalfields in Germany

Organisers expect a thousand people from across Europe to target opencast lignite mine, a major source of emissions 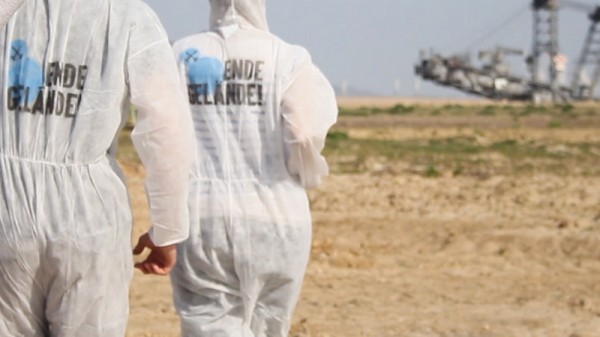 A thousand activists are expected to descend on the Rhineland coalfields in Germany this weekend in protest at the fuel’s climate impacts.

They are targeting RWE’s opencast lignite mine. Together with the energy company’s three power stations in the area, it makes up Europe’s biggest source of carbon dioxide, activists say.

Under the banner Ende Gelände – “here and no further” – they aim to bring the site’s 220m-long diggers to a halt. Buses will bring in groups from eight other European countries, including the UK, Spain and Denmark.

An RWE spokesperson said the company respected freedom of speech but entering the mine would be “illegal, and not something we can tolerate”.

Writer and activist Naomi Klein said: “These coalfields pose an existential threat to humanity, which is why our movements need to step in once again and shut them down.” 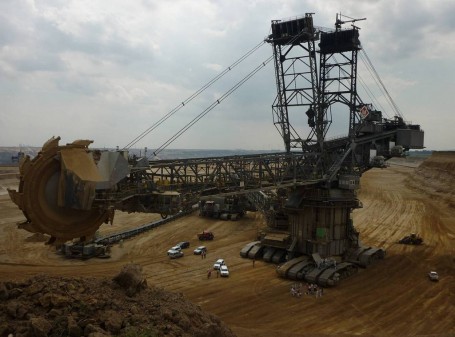 Brown coal is scraped out of the ground by huge diggers (Flickr/350.org)

Globally, coal is the biggest source of greenhouse gas emissions driving climate change. Lignite, also known as brown coal, is a particularly dirty fuel due to its high moisture content.

To meet the international goal of limiting temperature rise to 2C above pre-industrial levels, scientists have calculated 89% of Europe’s coal needs to stay in the ground.

“We’re driven not by ideology but by physics: there’s simply no way to burn all this lignite and keep the climate intact,” said Bill McKibben, journalist and co-founder of campaign group 350.

Despite an aggressive renewable energy push, Germany’s emissions rose in 2012 and 2013 on an increase in coal use.

In a bid to salvage progress towards its emissions target – a 40% cut from 1990 levels by 2020 – Berlin last December proposed a levy on coal power generation.

It sparked a fierce backlash from industry, with RWE saying the levy would force closure of two of its three lignite mines and 17 out of 20 power stations – slashing jobs.

To the anger of environmentalists – and relief of RWE – the government backed down, instead getting emissions cuts from other sources and paying operators to retire a small number of lignite stations.

In its half year results on Thursday, RWE revealed an energy company struggling to adapt to the shifting market.

Coal-fired power stations, which generate 60% of its electricity, are under pressure from climate policies and a renewable energy surge.

“We continue to face strong headwinds,” chief executive Peter Terium said in a press call reported by Reuters. “The crisis in conventional electricity generation, in particular, continues to cause us a lot of trouble.”

Terium welcomed the government’s decision to abandon its planned coal levy. “We support the transformation of the energy sector,” he wrote in the results foreword, “but we oppose policies that cause structural disruption.”

For Dorothee Häußermann, Ende Gelände spokesperson, this showed why government could not be counted on to do the right thing for the climate.

“The massive resistance from RWE and Vattenfall lobbyists that we’ve seen over the past few months against the proposed coal levy has made it once more crystal clear that we need to take climate action into our own hands,” she said.

“That is why we will blockade the coal diggers in the Rhineland this August. There is no longer a place for lignite.”

The action will take place 14-16 August. According to the campaign website, activists will “use [their] bodies to block and occupy” the site and halt digging.

In this act of civil disbodience, the organisers promise not to damage equipment or put people in danger.

There will also be an official – legally sanctioned – demonstration on Saturday.

An RWE spokesperson said: “We know people are against lignite mining and conventional energy extraction. It’s their human right to say what their opinion is.

“Of course there’s a but: as long as it remains a discussion it’s okay, but this weekend Ende Gelände has announced they intend to get into our operation, a lignite mine – this is illegal, and not something we can tolerate.”