What do you think about Obama’s clean power plan? 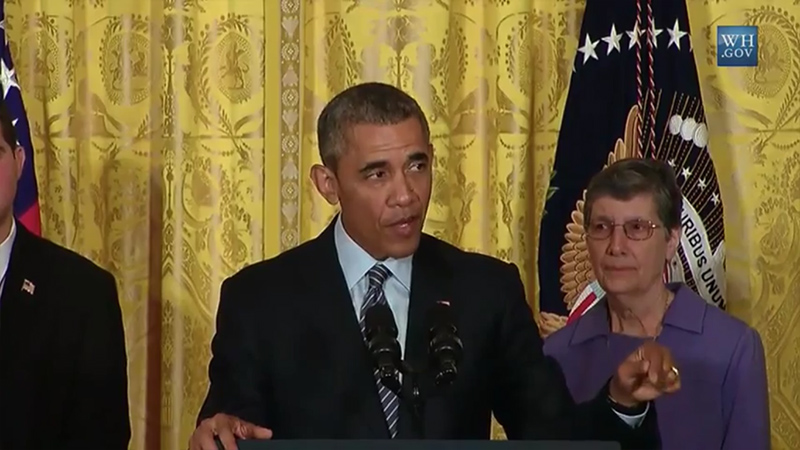 Targeting cuts in greenhouse gas emissions from power plants, which belch 40% of the country’s CO2, it has drawn a mixed reaction.

President Barack Obama’s war on coal marks the boldest leadership ever taken by a president on the climate, for some, with wins for public health.

Others see it as a job-killer, smothering the Constitution, and downright heretical. A ‘tsunami of litigation‘ to overturn it is expected.

Though across the US, a majority of Americans in almost every state (except Alaska, North Dakota, West Virginia, Wyoming) support emissions curbs on coal-fired power plants, according to the Yale University project on climate change communication.

Nationwide, the plan finds 70% of Americans support it, with 29% against, according to a survey in March.

Here’s how commentators replied to RTCC. We’d like to hear your views too. Either a comment in the box at the bottom of the page, tweet us @RTCCclimatenews or email me: [email protected]

Thoriq Ibrahim, minister of environment and energy for the Maldives, and head of the alliance of small island states

US leadership is not only essential for a successful outcome in Paris, but it is also indispensable to managing climate change over the long term.

We have already seen the Obama Administration step up their climate diplomacy this year and I can tell you it has been most appreciated by the international community.

While it will take some time to fully evaluate what was announced today, we welcome the clarity the United States has given on how it intends to reduce its emissions and we hope we see even more ambition from them and other countries in the near future.”

Paul “Chip” Knappenberger at the Cato Institute, a libertarian think in Washington DC

When the rubber meets the road it’s a lot easier to talk about [the clean power plan] than put it place.

It’s giving the signal that Obama would like to seen working hard trying to get commitments, which is playing well internationally, though of a lot of people are realistic his aspirations may not coincide with being able to get this done.

You can see this developing into an election issue, if it’s going to be leading issue the person that wins [if Republican] may want to rip this up.

In terms of the economic signals it sends is mixed in the sense that how this is going to affect the push for renewable energy.

If you can shift from coal to shale this is very easy and very business as usual, and doesn’t demand a push or technological advancement. Focus on shale gas can actually discourage innovation in renewable energy sector, and postpone or slow down the process of transformation.

It’s a welcome step but I personally don’t think it will have any impact for India and its coal consumption and the [UN] negotiations.

Jose Goldemberg, a former environment secretary in the Brazilian government who led its participation in 1992 Earth summit

Due to a severe drought, Brazil since 2014 has been generating approximately 20% of its electricity from thermal sources (fuel oil, gas and coal) reducing the hydroelectricity contribution.

As result CO2 emissions increased substantially. The US example reducing the share of coal in electricity generation most likely will influence Brazilian authorities to avoid the use of coal.

Roy Blunt, US Republican senator for Missouri who has said humans’ role in causing climate change is unclear

As a member of the Senate Appropriations Committee, I’ve fought hard to ensure provisions that would defund this harmful power grab were included in the final appropriations bill.

I also support legislation to block this harmful rule and protect workers and families from the damaging effects of the Obama Administration’s executive overreach and costly energy regulations.