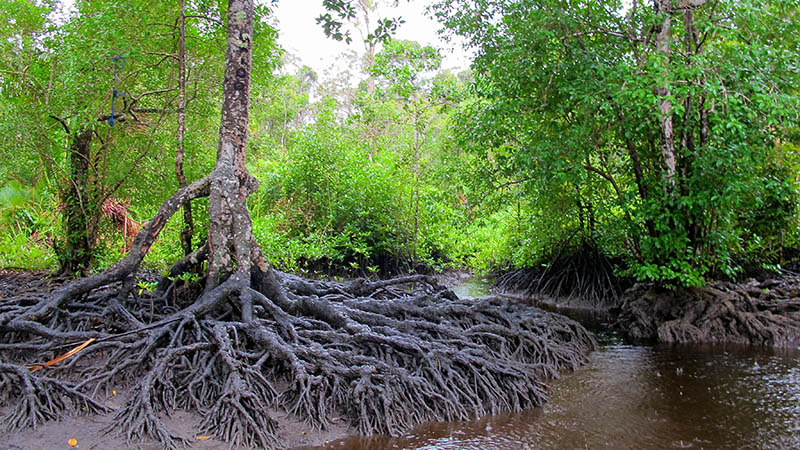 Indonesia, one of the world’s largest carbon emitters, would take a major step towards losing that tag by protecting its massive mangrove forests, according to new research.

The mangroves, which store prodigious quantities of carbon, are currently disappearing fast − often destroyed to make room for aquaculture to satisfy the wants of lucrative foreign markets.

But a team from the Centre for International Forestry Research (CIFOR) and colleagues report in the journal Nature Climate Change that protecting the mangroves could take Indonesia a quarter of the way to achieving the whole of the greenhouse gas emissions cuts it plans for 2020.

Indonesia, with the longest coastline in the tropics, has more mangroves than any other country − more than 2.9 million hectares. But it also has one of the world’s fastest rates of mangrove loss.

The main threats to the forests include conversion to shrimp ponds, logging, conversion of land to agriculture or salt pans, and degradation by oil spills and pollution.

In 2013, Indonesia’s revenue from shrimp exports was close to US$1.5bn, almost 40% of the total revenue from the country’s fishery sector.

The researchers say the Indonesian mangroves, some of which grow to 50 metres in height, store 3.14 billion tonnes of carbon, which amounts to one-third of the carbon stored in Earth’s coastal ecosystems.

But they are under grave threat. In the last 30 years, 40% of these coastal forests have gone, and the annual rate of loss now is about 52,000 hectares, causing substantial greenhouse gas emissions.

The current rate of destruction means that 190 million tonnes of CO2-equivalent (CO2e) are emitted annually. That is 42% of the world’s annual emissions from the destruction of coastal ecosystem services − marshes, mangroves and sea grasses.

Put more graphically, Indonesia’s destruction of its mangroves emits as much greenhouse gas as if every car in the country was driven around the world twice.

“We hope that these numbers help policymakers see mangroves as a huge opportunity for climate change mitigation,” says Daniel Murdiyarso, principal scientist at CIFOR and lead author of the paper.

“But to make progress, it is crucial that mangroves are protected and managed sustainably. It is time to acknowledge that mangroves must be part of the solution to climate change.”

Dr Murdiyarso is also co-author of a CIFOR guide on climate change adaptation and mitigation in Indonesia’s wetlands.

In a separate study, published in the Royal Society Proceedings A, further light is shed on the crucial role mangroves play in protecting coastal areas from sea level rise caused by climate change.

The study, by researchers at the University of Southampton, UK, and colleagues from the universities of Auckland and Waikato in New Zealand, used mathematical simulations to discover how mangrove forests respond to elevated sea levels.

When sea levels rise, they found, areas in estuaries and river deltas without mangroves are likely to widen from erosion, and more water will encroach inwards. But mangrove regions prevent this effect, probably because of soil building up around the trees’ mesh-like roots and acting to reduce energy from waves and tidal currents.

Dr Barend van Maanen, a coastal systems researcher in the department of engineering and environment at the University of Southampton, explains: “As a mangrove forest begins to develop, the creation of a network of channels is relatively fast. Tidal currents, sediment transport and mangroves significantly modify the estuarine environment, creating a dense channel network.

“Within the mangrove forest, these channels become shallower through organic matter from the trees . . . and sediment trapping (caused by the mangroves), and the sea bed begins to rise, with bed elevation increasing a few millimetres per year until the area is no longer inundated by the tide.”

In modelling of sea level rise in the study, the ability of mangrove forest to gradually create a buffer between sea and land occurs even when the area is subjected to potential sea level rises of up to 0.5mm per year.

“These findings show that mangrove forests play a central role in estuarine and salt marsh environments,” says Giovanni Coco, associate professor in the school of environment at the University of Auckland.

“As we anticipate changes caused by climate change, it’s important to know the effect sea level rise might have, particularly around our coasts.”