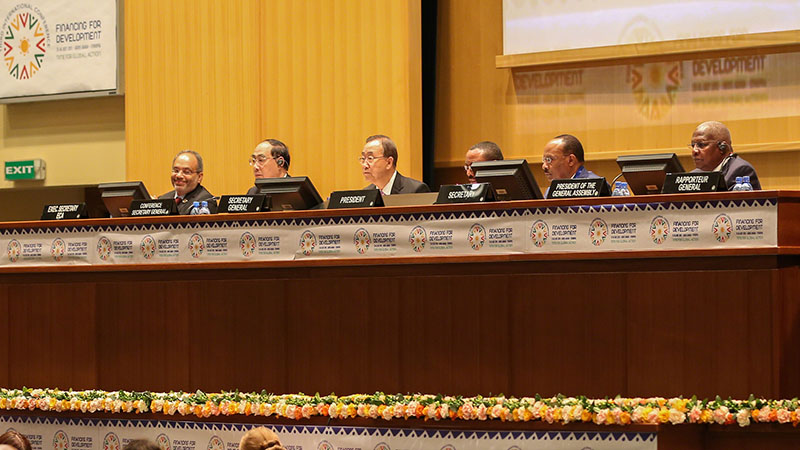 By Leo Barasi in Addis Ababa

The question of how best to tackle climate change is omnipresent in Addis Ababa this week, amid high level talks to tackle poverty and hunger.

The UN-backed Financing for Development conference has a broad scope, well beyond global warming, but its potential impacts on developing countries have been a frequent feature.

“If we don’t stop climate change, we won’t be able to implement sustainable development or end poverty”, Sweden’s international development minister Isabella Lövin told a meeting at the conference.

Analysis: What to expect from UN’s Addis Ababa summit

But beyond the rhetoric, what difference will the Addis conference make to global efforts to address climate change?

The Third Financing for Development Conference runs until tomorrow, with delegates seeking agreement on funding to support the world’s poorest countries over the next 15 years.

The meeting is intended to establish the funding available for tackling global poverty, before an international conference in New York in September in which world leaders are due to agree on the SDGs.

The Addis conference is also seen as crucial for shaping the funding available to efforts to address climate change, ahead of another international conference, in Paris in December.

It is widely expected that delegates in Addis will agree on a text by the end of the week, although key details are yet to be finalised.

Outstanding areas include international tax reform, the language describing developed countries’ responsibility for tackling poverty, and how decisions here will be tracked.

Most attention has gone to ensuring that rich countries meet their existing commitment to provide $100 billion a year by 2020 for measures to reduce emissions and adapt to climate change.

So far, around US$10 billion has been pledged to the UN-backed Green Climate Fund, raising doubts about the willingness of richer countries to cough up.

Some observers have also warned that, even if pledges to the Fund increase, those pledges could come at the expense of other foreign aid commitments, at a time when the impacts of climate change mean that developing countries are likely to need extra support.

“Rather than having climate finance counted as ODA [foreign aid], we need additional resources to help manage the damage while we move on with normal development”, Martin Tsounkeu, general representative of the African Development Interchange Network, said at a side event.

To address this risk of aid being replaced by funds for addressing climate change, “as a very minimum the conference should agree, as climate finance increases, to stop the displacement from ODA”, Lies Craeynest, a climate advisor at Oxfam, told RTCC.

Conference delegates also pointed to the potential for reforms to subsidies and other pricing systems to reduce emissions.

“Putting a big fat price on carbon dioxide and other emissions is imperative”, Ángel Gurría, Secretary-General of the OECD, told a side event in Addis.

“We’re all over the place, we’re still subsidising the enemy… We need to face up to fossil fuel subsidies,” he added.

At the same event, US economist Jeffrey Sachs described efforts to drill for oil in the Arctic as “an act of imbecility”, adding “we have no use for the oil they’re drilling”.

The draft text under discussion at Addis refers to measures on climate finance, carbon taxation and fossil-fuel subsidies, although some Gulf countries, with support from America and industry groups, have been resisting references to these specifics, according to sources close to the negotiations.

Partly as a result of this pressure, if references to these areas make the final text, as seems likely, they are not expected to introduce any significant new commitments.

The draft makes clear that the climate finance measures discussed in the text are either existing commitments, or are options that governments should only consider exploring in the context of their national circumstances.

Does that mean that, when it comes to climate change, the conference has been a failure or has been, at best, irrelevant?

Not exactly, according to observers at the conference, although they argue its success is still not guaranteed.

Among the most important result of the conference will be “the atmospherics”, Andrew Norton, director of the International Institute for Environment and Development (IIED), told RTCC in his first interview since taking up the post last month.

The conference will be a success if it finishes “with a sense from the G77 [group of developing countries] and the least developed countries that their major asks have been dealt with reasonably”, he said.

In his view, discussions in Addis about “a few touchstone issues” like international tax reform have the potential to shape the chances of success at December’s climate negotiations, both by potentially increasing resources available to developing countries and by setting the tone for the talks.

Negotiations on the final text, including on tax reform, have continued throughout the conference, with a planned plenary session to discuss the text on Tuesday evening postponed until Wednesday afternoon to give delegates more time to resolve disagreements.

The European Union’s Development Commissioner said discussions about the draft text should end and it should be agreed as it stands.

Norton added that momentum from the conference could lead to significant progress in addressing climate change through investment in technologies to reduce emissions, particularly renewable power and energy storage.

“We could put fossil fuels out of business on price alone in ten years – what that’s about is finance”, he said.

Still, he remains unsure about whether the conference will be judged a success in supporting action to address climate change: “I’d like to be optimistic but I feel a lot is in the balance, especially having enough momentum going to Paris. It is not clear yet in what way Addis will leave its mark.”

Craeynest adds that a likely positive outcome of the conference is a demonstration of “a growing understanding of the threat from climate change and the obligation to support clean development”.

However, she warns that, if the conference does not agree on new financing to address climate change, international government will have to face the issue again imminently.

“The work doesn’t stop here. If rich country finance ministers haven’t invested in this process it will come back to them.”