Study compiled by experts from US, UK, China and India underlines migration potential from warming world 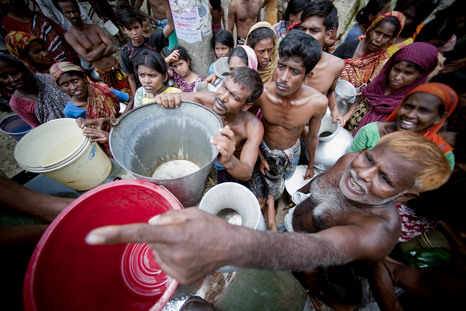 India will face a huge influx of refugees from Afghanistan, Pakistan and Bangladesh should high degrees of climate change develop, according to one of the country’s senior military officials.

Drought and flooding linked to sea level rise would place the governments of those countries under “severe stress” and lead to large-scale migration, said Vice Admiral Pradeep Chauhan, head of the Indian Naval Academy.

“In India, this would combine with an internal population shift from rural to urban areas, further increasing demographic pressure in cities,” he wrote in a climate risk study backed by the UK Foreign Office.

A significant influx of migrants could further destabilise what is known as India’s “Red Corridor”, a belt of land running through east India where Marxist rebels are fighting the state.

“The temptation to solve this problem through military intervention could become overwhelming,” he added.

Current greenhouse gas emissions will “likely as not” mean temperature increases of 4C above pre-industrial levels by 2150 said the study, with severe implications for human health and crop yields.

A N M Muniruzzaman, a retired Bangladeshi major general, said millions of people in his country could be displaced as a result of sea level rise.

“Flooding is projected to increase in many regions, but it could be a particular problem in South Asia due to the contribution of melting glaciers,” he said.

Chauhan’s and Muniruzzaman’s comments were based on a war gaming exercise held in Delhi in March, hosted by the Council on Energy, Environment and Water.

Former military officials from India, China, the US, the UK, Bangladesh, Germany, the Netherlands, and Finland took part, along with scientists and diplomats.

“In the game, it was notable that increasing numbers of refugees contributed to several large countries becoming more isolationist in their foreign policies,” says the study.

“Participants in our exercise considered it extremely likely that climate change would exacerbate humanitarian crises over the coming decades.”

Long term water stress in South Asia could become so severe previous agreements over resource sharing between India, Pakistan, China and Bangladesh “could be broken”, the study warns.

“At the high degrees of climate change possible in the long-term future, participants in our scenarios exercise considered that there could even be risks to the political integrity of states that are currently considered developed and stable.”

Alex Randall from the UK-based Climate Change and Migration Coalition said the document presented a “one sided view of migration” seeing it only as a security threat.

“While there is growing evidence linking climate change to changing patterns of migration, there is little evidence suggesting that migrants and refugee present the kind of security threat suggested in the report,” he said.

“There is also strong evidence indicating that migration could become a key way for some people to adapt to climate change.”