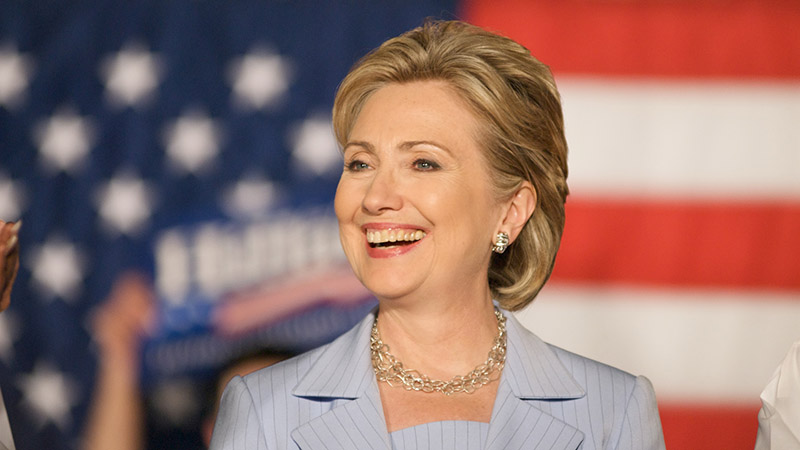 Midway through the 2009 UN climate summit in Copenhagen, US officials knew the process was in trouble.

Senior envoy Todd Stern sent for secretary of state Hillary Clinton. “It’s looking more and more difficult,” he wrote, adding “but bad if we don’t try full out. Thanks pal.”

This is just one of the 3000 pages of Clinton’s personal emails while secretary of state – released by the State Department on July 1 after Freedom of Information Act requests.

Many have been heavily redacted, others touching on Israel, Russia and Benghazi are politically sensitive – but the few climate related notes offer an intriguing insight into the US mentality.

Here are six things we’ve learnt about how the US views climate negotiations.

“Hi guys from Germany. HRC might be interested in press clips below, especially the AP story. Good day today” – wrote Todd Stern in March 2009, after a day when he had been applauded at UN talks for pledging to “make up for lost time” after 8 years of a Bush administration that did little.

The attached AP news agency report quoted veteran environmentalist Keya Chatterjee from WWF saying “It sent chills up my spine seeing the US applauded.” Those sunny days were short-lived, and by the time the Copenhagen summit came around the US was scrabbling to save its reputation.

2 – Copenhagen is doomed. Send for Hillary!

Six says in to the 2009 climate summit – a meeting billed as the moment to agree a new global deal – it was clear the talks were doing downhill.

Stern told her chief of staff Jacob Sullivan to get the secretary of state across the Atlantic. The moment had come for leaders to try and solve what was becoming an intractable fight between developed and developing countries. 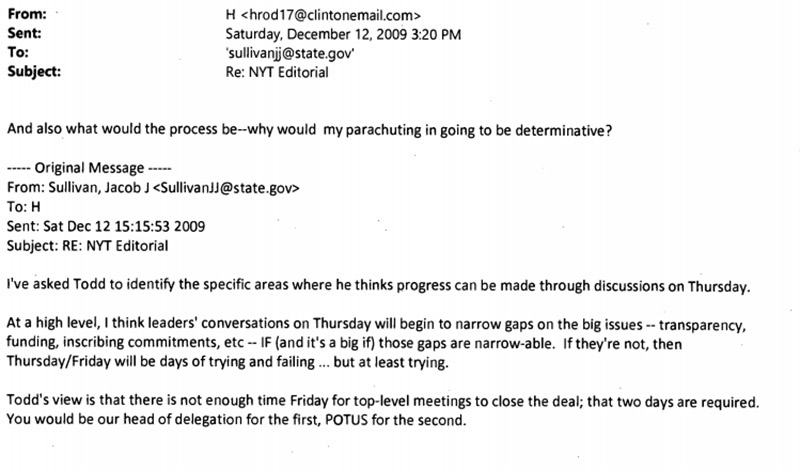 3 – World leaders are not climate experts

Why am I coming over and what should I know? That’s the gist of Clinton’s email back to Copenhagen. She had one overnight flight to familiarise herself with the key issues before being plunged into what are deeply complex negotiations.

Did Clinton make a difference? Views are mixed. It’s clear from her memoirs she found the experience confusing and frustrating – especially the hours spent trying to hunt down a secret meeting between the leaders of China, South Africa, India and Brazil.

In the aftermath of Copenhagen Clinton confidante Sidney Blumenthal writes of a need for a “policy review” in the aftermath of the talks, and what he perceives as the slight shown to president Obama from China. “Fear of Chinese retribution can’t be allowed to paralyze reassessment,” he says.

Blumenthal quoted from a Guardian article by UK environmentalist Mark Lynas – then working as an advisor to the Maldives – who said the Chinese “intentionally humiliated” Obama and insisted on an awful deal so western leaders would get the blame.

A key concern was the way in which the failure of the talks was being pinned on the US. Clinton replies she recognises some of Lynas’ account – but adds she was only there for 48 hours.

5 – US officials felt Kyoto was a bit rubbish

But was the Copenhagen Accord such a disaster? Not so says John Podesta, soon to be Obama climate advisor but then head of the Centre for American Progress think tank.

The new deal was much better than the Kyoto Protocol, the world’s only legally binding climate treaty but one without the US or major developing country emitters. “Congrats to all!” writes the man credited with later building the US Climate Action Plan.

Pictures of Stern at the end of the two weeks show a ghost of a man who hadn’t slept properly for a week. He was the man sent out to explain the Accord to journalists in the aftermath – and copped flak long after Clinton and Obama had flown home.

But he had a pre-Christmas booster waiting for him once he arrived back… Onward!