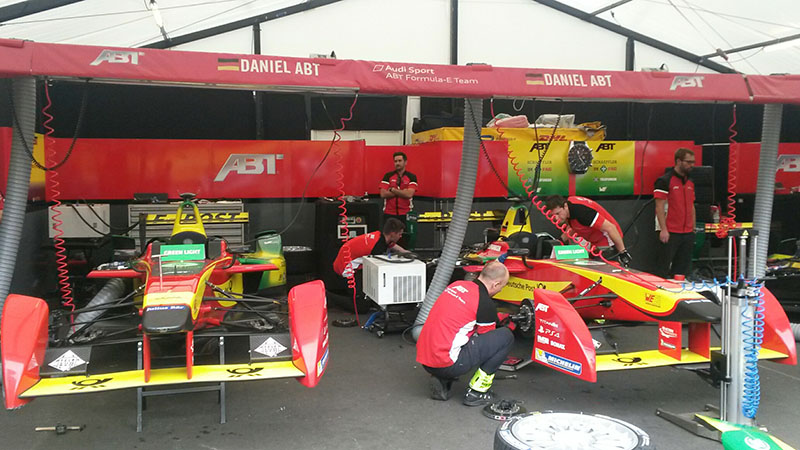 Engineers at Audi’s Formula E team prepare their cars ahead of the last race of the 2014-2015 season (Pic: Ed King/RTCC)

It took a while to catch on, but high speed electric car racing is here to stay.

That’s the verdict from Jean Todt, head of world motorsport’s governing body the FIA and manager of Ferrari’s Formula 1 team from 1994-2007.

“We are in a good direction… it’s the right way to go,” Todt told RTCC on the sidelines of a hectic pit lane ahead of the final Formula E race of the season in Battersea Park, London.

For Piquet this was a personal redemption. The Brazilian’s previous claim to fame was deliberately crashing his F1 car at the 2008 Singapore Grand Prix to help teammate Fernando Alonso secure victory.

But for Formula E and the wider electric car industry this race and the series was far more significant.

Born from a restaurant conversation in 2011 and backed with £60 million of funding from CEO Alejandro Agag, a Spanish businessman, few thought it would become reality.

Most observers predicted hardened petrolheads would ignore the Star Wars whine of electric motors, preferring the full throated roar of a V6 turbo.

Instead of competing with F1, Agag decided he would offer a different package, targeting iconic inner city circuits in Beijing, Moscow, Miami, Long Beach and Monaco.

At £15 a ticket and at the centre of a city it’s a brand of motorsport that’s cheaper, more family friendly and easier to get to than its more illustrious cousins.

At the centre of this philosophy – featuring alongside adverts for solar panels – is the Fe slogan, “Drive the future”, and Agag’s favoured phrase, “much more than just a race”.

It’s one the likes of Audi, Virgin, Prost and Renault have bought into, not to mention Indian conglomerate Mahindra, Leonardo Di Caprio’s Venturi outfit and NextEV TCR, a team backed by the Chinese government.

What’s revealing is the huge investment F1 behemoths Williams and McLaren have made in these cars, developing a battery capable of accelerating the cars to 140mph and a motor with the greatest power density in any car on the planet.

“Throughout the greater world of motorsport there were more people who believed the the concept would fail,” he said.

“But when when you look at quality of teams, drivers and vendors – like Mclaren and Williams – there’s an enormous investment… it has silenced a lot of doubters.”

Two garages down in the pit lane, John Wedlake, a data and systems engineer at Mahindra, said he expected huge improvements in the speed and handling of the cars in the coming few years.

Rules designed to ensure the sport was affordable for new entrants specified exactly how cars needed to be set up. But from next year onwards these will be steadily relaxed, allowing teams to experiment with new technologies.

“Once you open up a section to a race team all the toys will come out of the box and they will work to get everything out of the kit we’re allowed to play with,” he said.

“In two to three years time they will be doing things that other race cars, possibly outside the Le Man series that no one else is doing. That’s what is going to come in the future.

Definitely a #cleanrevolution theme here at #FormulaE | countdown to title decider & sun has decided to come out pic.twitter.com/QGuRoM25VM

For now the lithium Ion power pack designed by Williams – boasting the power of 10,000 AA batteries – will stay.

But new control systems for managing power delivery and battery consumption are likely to evolve in the coming years, said Beresford, as will their understanding of how electric cars handle in different conditions.

“Where we’re at now is where mobile phone technology was in the 80s… to those of us who want to look beyond the skin you are looking at the future.. but you just don’t know what it’s going to look like yet,” said Wedlake.

The sport has in effect generated a new and what is likely to be increasingly competitive market for electric car technologies which will eventually find their way into road vehicles.

And it could also act as a platform for steadily accelerating efforts to make electric and hybrid cars more acceptable to the public – and perhaps in time more affordable.

Judging by the heavy electric vehicle advertising around Battersea Park, tapping into this burgeoning market is a key goal for BMW and Renault, in whose huge stands in the “e village” the public could stroke and sit in their latest cars.

According to an Ernst and Young study commissioned by Fe, the sport could help sell an extra 77 million EVs worldwide, save 4 billion of barrels of oil and avoid the emission of 900 million tonnes of carbon dioxide.

Is this a green sport? That’s unlikely, despite the protestations of the organisers who stressed the low energy lightbulbs used in the media centre.

The ostentatious wealth on display during the pit walk suggests many of the sport’s biggest supporters are also likely to be some of the world’s highest per capita emitters of greenhouse gases.

Still, it’s a sign that new and cleaner technologies are making headway in a sector dominated by oil and gas guzzling vehicles.

“What it showcases is a drive to get low carbon vehicles on the streets and the aim of having an ultra-low emission zone in the heart of the city by 2020,” said London Mayor Boris Johnson, after taking one of the cars for a spin around the track on Saturday.

Speaking on the Fe launch day at Battersea Park Sir Richard Branson – owner of the Virgin Racing Fe team – predicted that in 20 years petrol cars would be history, calling the combustion engine “antiquated”.

“I think in four or five years you will find Formula E taking over from F1 in terms of number of people,” he said.

“As time goes on, the clean energy type of business will power ahead of other businesses.”