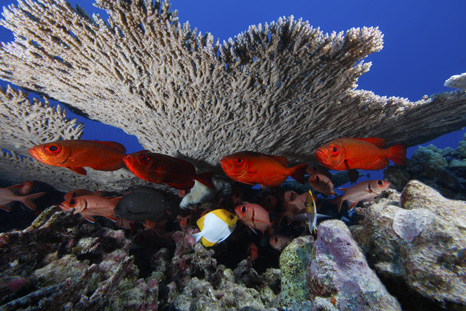 Global warming is likely to drive marine creatures away from the equator in search of new and cooler habitats − and  is likely to limit the safest options for many migrant fish, crabs and corals.

One problem for marine life is that warmer waters hold less oxygen, so the corals that move to higher latitudes will have to settle in shallower water to take advantage of the diminishing light. This, too, creates hazards.

Curtis Deutsch, an oceanographer at the University of Washington in the US, and colleagues report in the journal Science that the ocean’s denizens could be heading for respiratory stress. Warmer waters speed up the metabolic need for oxygen, but those same warmer waters hold lower levels of dissolved gases.

“If your metabolism goes up, you need more food and you need more oxygen,” Dr Deutsch says. “This means that aquatic animals could become oxygen-starved in the warmer future, even if oxygen doesn’t change. We know that oxygen levels in the ocean are going down now, and will decrease more with climate warming.”

His co-author, Hans-Otto Pörtner, head of the Department of Integrative Ecophysiology at the Alfred Wegener Institute in Bremerhaven, Germany, says: “If the oxygen level in a given region of the ocean drops below a species’ minimum requirements, it forces the animals to abandon their native habitat. This combines with the effect of warmer temperatures.

“Since animals evade to cooler regions, their habitat shifts towards the poles or to greater water depths. In Atlantic cod and many other fish species, we can already observe the shift now.”

That change is undoubtedly on the way. One group has just calculated that between 50% and 70% of the world’s oceans could see changes in biodiversity as the sea surface temperatures creep upwards.

The next question is: what kinds of change and what kinds of habitat will be available for submarine climate refugees? The researchers chose four well-studied marine species for their simulations of the impact of climate change on the maritime world.

These are the open ocean-dweller Atlantic cod, the coastal water-dwelling Atlantic rock crab, the sharp snout sea bream of the sub-tropical Atlantic and Mediterranean, and the common eelpout, a bottom-dwelling fish that lives in the shallow waters of the high northern latitudes.

The study suggests that, for many species, the combined stress of higher metabolic rates and lower levels of dissolved oxygen will mean that possible habitats will contract by between 14% and 26% because at the present species’ ranges nearer the equator, peak oxygen demand would become greater than the supply.

Also in Science journal, a team led by Paul Muir, acting curator for corals at the Museum of Tropical Queensland in Australia, reports on the potential future for 104 species of staghorn corals – the tiny creatures whose skeletons make up the reefs that offer the richest habitats in the tropical seas.

Corals are sensitive to extremes of temperature. As the mercury levels climb, they can “bleach” and reject the algae on which they depend for survival. And if conditions are too hot for too long, they can perish.

But the Australian team found that these animals, too, are caught in a kind of habitat trap. As they migrate away from the equator, they must nest in shallower water to take advantage of the lower levels of winter sunlight that penetrate the waters at higher latitudes.

The corals are likely to have to rise 0.6 metres for every one degree of latitude of migration. But there is a limit to how high in the water they can rise because, at a certain point, temperature, salinity and wave damage will start to take their toll.

“The two studies remind us that climate change will reshape marine species’ habitats, but not necessarily expand them,” warns Joan Kleypas, a marine ecologist/geologist at the US National Centre for Atmospheric Research, in the same journal.

“Both studies highlight little-recognised barriers to future range expansions in the oceans,” he says. “Each is based on physiological limitations of marine organisms that are quantifiable, and thus increase our ability to predict species habitats into the future.”