Desert state has abundance of sunshine and could produce more than it consumes, says power company boss 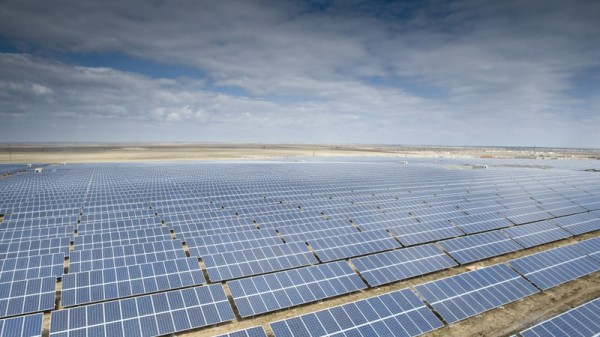 By Ed King in Barcelona

Hopes that Saudi Arabia, the world’s top crude oil producer, could soon become a top solar energy exporter are well founded, according the head of one of the country’s leading power firms.

“Saudi could be a solar exporter – I think it’s absolutely realistic and it’s going to happen,” said Paddy Padmanathan, CEO of ACWA Power, which runs a portfolio of solar, coal, gas and desalination plants across the Middle East.

In the short term, he said it was likely solar would fill the gaps in fast rising demand in the country, 10-11% a year in what is now a 50 GW grid.

“Within a decade I have a suspicion we will produce a significant amount of electricity using renewable energy and particularly solar – but we will consume it.”

“There will come a time when we have enough capacity for exports… the minute we start looking across a broader mix of countries we can start looking at time zone differences.”

“In Saudi Arabia, we recognise that eventually, one of these days, we are not going to need fossil fuels. I don’t know when, in 2040, 2050 or thereafter,” he told a conference in Paris.

Padmanathan’s company recently made headlines after promising to deliver solar power at one of the lowest prices on the planet – 5.98 cents per kilowatt hour.

The 200MW project in Dubai – secured with a US$344 million loan from three Saudi banks – is evidence of the potential solar has in the region, he said.

“Pricing is coming down and this is immediately changing the midst – everyone is out there looking at new targets.

ACWA runs a portfolio of solar, coal, gas and desalination plants across the Middle East, and is also planning further fossil fuel investments.

Still, Padmanathan insisted that the prospect of a global climate deal later this year in Paris would accelerate renewables growth.

“It is cost competitive already – what we want to see is if we can get there faster,” he said.

“What the private sector is looking from policymakers [in Paris] is a clear commitment to accepting renewable energy into the mix.

“Whether they pick 5% or 50% it doesn’t really matter – but they need to come out and pick a target and give a convincing commitment.

“That is what is going to allow the private sector confidence in a market to invest in innovation and make it more affordable.”