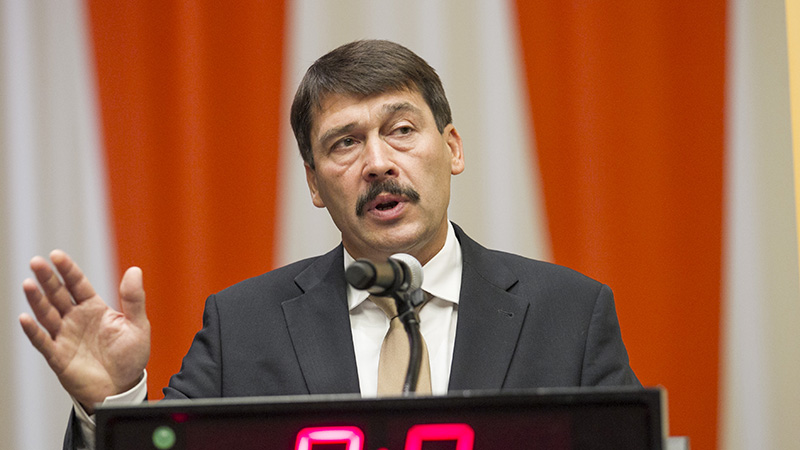 By Pavel Antonov in Budapest

János Áder, the President of Hungary, has become the first head of state to join the Live Earth: Road to Paris campaign that aims to ensure world leaders agree to a binding deal on tackling climate change.

The specific aim is to get a billion signatures from concerned citizens before the UN climate change conference in Paris in December, but organisers are also keen to get as many politicians and celebrities as possible to back the campaign.

The Road to Paris campaign was launched in January at the World Economic Forum in Davos, Switzerland, by former US vice-president Al Gore, songwriter and recording artist Pharrell Williams, and the Emmy award-winning producer and new media entrepreneur, Kevin Wall.

Áder, a former member of the European Parliament’s Committee on the Environment, Public Health and Food Safety, endorsed the campaign at a press briefing in Budapest earlier this month.

Praising Gore’s initiative, Áder talked about the evidence of climate change, available solutions, the positive impacts of green technologies, and the challenges and opportunities of the Paris conference in December.

A spokesperson for Gore told the Climate News Network that the agreement in Paris should involve meaningful emissions reductions commitments at the national level, subject to a system of periodic review, and a long-term goal of net zero-carbon emissions.

A Hungarian website that mirrors the US initiative will seek to encourage widespread local demand for a strong agreement that will dramatically cut emissions and accelerate the planet-wide shift to clean energy, said Zsolt Bauer, of the Hungary-based Regional Environmental Centre (REC).

The REC was instrumental in setting the scene for Áder’s announcement, in partnership with the Climate Reality Project, chaired by Gore.

Áder has committed to speaking and broadcasting in Hungary to promote the petition, and to raising awareness of the available climate solutions, backed by the REC nationally and regionally.

Pavel Antonov, a Budapest-based journalist and social researcher, edits Evromegdan.bg, a not-for-profit online magazine for journalism in the public interest, published by BlueLink.net