Giant Antarctic ice shelf could collapse by end of century 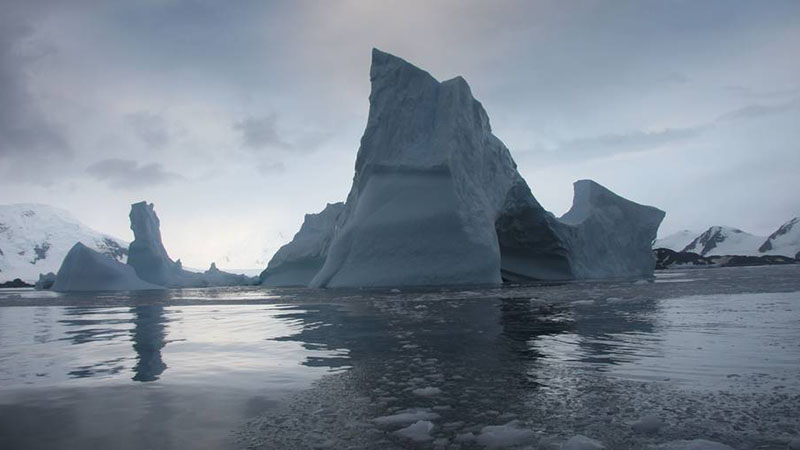 Antarctica’s Larsen B ice shelf is likely to collapse into hundreds of icebergs before the end of the decade, according to NASA

Scientists have measured the rate of thinning of the great sea ice shelf of the Antarctic Peninsula and have identified the mechanisms at work above and below the shelf.

The collapse of floating sea ice makes no direct difference to global sea levels – but the effects could nevertheless lead to higher waters everywhere.

Paul Holland, of the British Antarctic Survey (BAS), and research colleagues from the US report in the journal The Cryosphere that they used satellite measurements and radar studies between 1998 and 2012 to confirm that the Larsen C ice shelf has lost four metres of ice, and is a metre lower at the surface.

This is the largest of three shelves that have been under study for decades; the Larsen A and Larsen B shelves have already broken off and drifted north to warmer waters.

The Antarctic Peninsula is one of the fastest-warming regions of the world: 2.5°C in the last 50 years.

“What’s exciting about this study is we now know that two different processes are causing Larsen C to thin and become less stable,” says Dr Paul Holland, lead author of the BAS study.

“Air is being lost from the top layer of snow (called the firn), which is becoming more compacted, probably because of increased melting by a warmer atmosphere.

“We know also that Larsen C is losing ice, probably from warmer ocean currents or changing ice flow. If this vast ice shelf − which is over two and a half times the size of Wales, and 10 times bigger than Larsen B − was to collapse, it would allow the tributary glaciers behind it to flow faster into the sea. This would then contribute to sea-level rise.”

A collapse of the shelf could occur within a century. When the two companion Larsen glaciers broke away, the glaciers that flowed from the ice-capped continent towards the sea began to accelerate.

Offshore ice, held fast to the shoreline, is a factor that helps keep glacier flow at its proverbially glacial pace. Once it has gone, the frozen rivers of ice onshore naturally begin to flow faster.

“We expect that sea-level rise around the world will be something in excess of 50 cm higher by 2100 than it is at present, and that will cause problems for coastal and low-lying cities,” says David Vaughan, director of science at the BAS.

“Understanding and counting up these small contributions from Larsen C and all the glaciers around the world is very important if we are to project, with confidence, the rate of sea-level rise into the future.”

The study is a confirmation of earlier research in which other groups, using different approaches, have already identified shelf ice loss and have warned that Antarctic melting could accelerate. Satellite-based measurements have also linked glacial melting with an acceleration in sea level rise.

Precision measurement of sea level rise is not easy. Oceans rise and fall with the tides, the water isn’t level anyway, and salinity and temperature differences in the oceans, and gravitational anomalies in the ocean basins, all mean that the ocean surfaces naturally undulate.

And the continents don’t keep still. Land surfaces from which researchers base their measurements also slowly rise or fall.

Christopher Watson, senior lecturer in the School of Land and Earth at the University of Tasmania, Australia, and colleagues report in Nature Climate Change that a different approach to the problem suggests that – contrary to previous estimates – sea level rise has accelerated in the last decade.

He and his colleagues searched not just global positioning satellite evidence from the surface waters but also from the land for signs of “bias” in the data. They also used evidence from hourly tide gauges from around the world and recalculated the rate of change.

What they found was that, overall, sea level rise in the last two decades has been at a rate just under, rather than just over, 3mm a year.

But the overestimate for the first six years of the survey had been much higher, which in turn suggested that the rate of rise had actually accelerated during this century, in a way that is consistent with the rate of glacial melting − at least from the Greenland and West Antarctic ice caps.