India: No place for dissent in world’s biggest democracy

Is Greenpeace crackdown a plan of Modi government to stifle alternative voices under the cover of national interest? 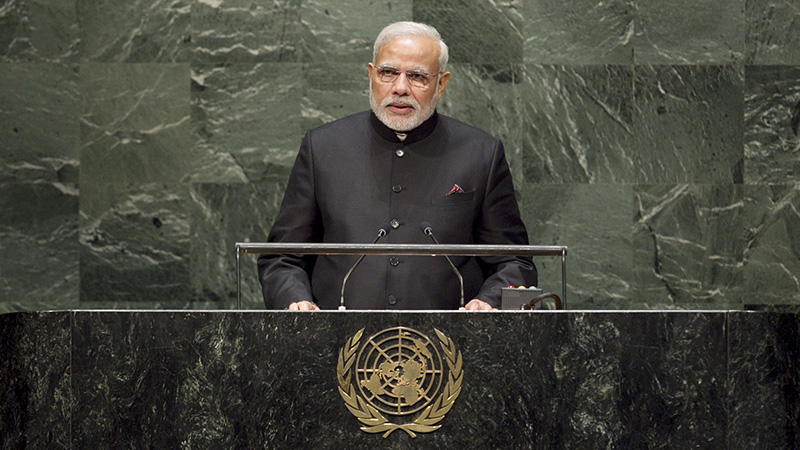 “You can’t muzzle dissent in a democracy”, said the Delhi High Court while delivering a verdict against the federal government’s attitude towards civil society.

But this is what green campaigners say India’s government led by prime minister Narendra Modi aims to do — stifle the voices that speak a language different from that of the state.

On April 9 the federal government blocked foreign funding to Greenpeace India with immediate effect by suspending its licence for six months and served a notice to it asking why its registration should not be cancelled.

The decision was taken by the Ministry of Home Affairs (MHA) after it was allegedly found that the NGO has “prejudicially affected public interests and economic interests of the country in violation” of the laws regulating international financial transactions — Foreign Contribution Regulation Act (FCRA).

The environmental organisation claimed last week it was being hit by “unfounded allegations”, filing a 26-page response to the MHA’s show-cause notice asking it to explain its alleged violations of the FCRA.

“We are confident that this response establishes our legitimacy beyond any doubt,” said Samit Aich the executive director of Greenpeace India.

Along with the 180-day suspension, the home ministry froze all seven domestic bank accounts of the organisation. The government is now planning to cancel the licence of Greenpeace to function in India.

“It is the government using strong arm tactics to clamp down on dissenting voices in civil society,” Greenpeace added in a press statement.

In June last year a report by the National Intelligence Bureau accused Greenpeace of acting against “national interests”.

This report was then used to block access to funds from Greenpeace International, a move that was overturned by the Delhi High Court in January this year.

This was followed by the government banning campaigner Priya Pillai from travelling to the UK in January to testify before a British parliamentary committee on the impact that a coal mining project by London-based Essar would have on the tribal population of Singrauli near the Mahan forest.

On January 20, the Delhi High Court had directed the Home Ministry to transfer the blocked foreign funds — to the tune of 19 million rupees (US$ 299,502) — from Greenpeace International and Climate Works Foundation to Greenpeace India’s accounts, declaring the ministry’s actions to be “arbitrary, illegal and unconstitutional”.

The court also observed that all NGOs were entitled to have their viewpoints and just because their views are not in agreement with that of the government’s, it did not mean they were acting against the national interest.

The home ministry claims that Greenpeace has used its domestic bank accounts to divert funds received from foreign donors.

Last week the minister of state for home, Kiren Rijiju, told the Rajya Sabha (upper house) that an inquiry conducted by the Home Ministry has found that Greenpeace India under-reported and repeatedly mentioned incorrect amount of foreign funds received.

He spoke of “violations of rules”, referring to the Foreign Contribution Regulation Act (FCRA) which governs how investments from overseas can be used in India.

These included using more than 50% of foreign funds on administration and paying salaries to foreign activists.

But it wasn’t just Greenpeace’s foreign accounts that were frozen but the domestic banking too, which Greenpeace India’s programme director Divya Raghunandan said was “shocking”.

“The domestic accounts have nothing to do with the entire FCRA Act and that is why we think this is absolutely unacceptable.”

Greenpeace now faces imminent shut down in India if the government doesn’t unblock its bank accounts.

“This has never happened in the history of Greenpeace,” said Priya Pillai. “It’s strange, it’s sad and it is alarming that this is happening in a country like India which is the world’s largest democracy.”

And that could mean many projects it was actively highlighting and blocking will now progress unopposed.

Activists have accused the government of watering down environmental rules allowing industries to operate closer to protected green zones. 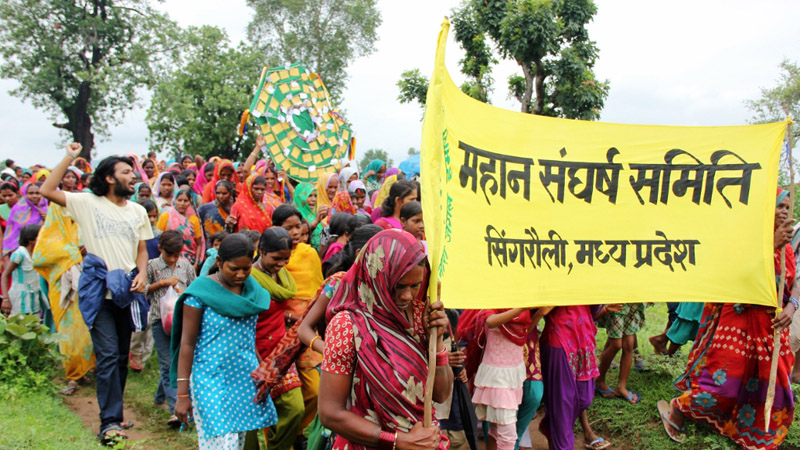 Local villagers have been opposing a new coal mine in the Mahan forests in central India (Pic: Avik Roy)

The government has already or is in the process of weakening key environmental laws in India — the Forest Conservation Act and the Environment Protection Act, and is amending laws that guarantee the legal rights of land owners and forest dwellers.

Satinath Sarangi, who works on rights of the victims of the 1987 Bhopal gas tragedy, describes the government crackdown as “illegal and unconstitutional.”

“This government is bent upon destroying the environment of this country and muzzling those who are trying to protect the environmental heritage of our country,” he said.

Modi, a right-wing Hindu nationalist elected by a landslide last May, wants to increase investment in infrastructure and make it easier for businesses to buy land to boost Asia’s third-largest economy.

India has a fast growing economy and population, but many are being left behind. The World Bank estimates a fifth still live below the poverty line. 300 million live without electricity access.

Since he assumed power, the prime minister has pushed through a series of long-awaited reforms and polices making it easier for companies to get approval for new projects.

But this aggressive development drive – which Modi argues is necessary for India to ensure millions have a good standard of living – has collided with civil society groups working to protect the environment.

Critics say his definition of development is pro-corporate and not necessarily pro-people, favouring huge corporations like Adani Industries and Reliance Energy.

Some of these companies are known to have deep links to some in the Modi government. According a report at the Deccan Herald, the Supreme Court had in March issued notice to the government on alleged bureaucrat-corporate nexus.

The apex court sought a probe on allegations that steel, energy and construction conglomerate Essar allegedly granted gifts and favours to ministers and bureaucrats for promoting its business.

Others have reported that the government was irked by Greenpeace targetting India’s public-sector Coal India and a project by Adani, whose promoter Gautam Adani is known to have a close relationship with Modi.

Activists say that the government wants untrammelled development thus seeking to dismiss any criticism of its actions.

Greenpeace campaigns on renewable energy, community rights to their forests and in favour of organic farming have earned the environmental watchdog powerful corporate enemies in the coal and pesticides sectors.

But they’re not the only ones feeling the heat. A similar ban on international funding was imposed on the Indian branches of 350.org, Avaaz and the Sierra Club among others.

The United States has expressed concern that India’s crackdown on the activities of Greenpeace and the Ford Foundation risks limiting the “necessary and critical debate” in the world’s largest democracy.

The US ambassador to India, Richard Verma, says a clampdown by Narendra Modi’s government could have a “chilling effect” on foreign-funded charities and activists and is a cause for concern.

“The regulatory actions that are being taken could have a chilling effect on speech and expressions,” Verma told a news briefing in New Delhi.

The move against NGOs has also sparked debate at Parliament, with the opposition Congress Party offering its support to green groups.

“If an NGO takes up a matter and protests against it in a peaceful way then it cannot be anti-national,” said Tariq Anwar, general secretary of Congress.

“They have been accused of this and banning their funding on the basis of this is undemocratic. I consider it to be wrong and government should rethink over it.”

End of the road?

While the debate continues, the clock is ticking for Greenpeace.

Pillai, whose overseas travel ban was overturned by the Delhi High Court in March, said that the NGO has been left with funds for staff salaries and office maintenance costs that will last for just about a month.

“Greenpeace India is heading for a shutdown. The reason we are going to shutdown is that government has blocked not only our FCRA money but also our domestic accounts,” she said.

“This means we cannot access any money by 77,000 Indian supporters who donate money to Greenpeace. It also means that the 340 people of Greenpeace who have been working on various campaigns in this country will lose their livelihood in a month’s time.”

According to media reports, the government has written to the revenue department to revoke Greenpeace India’s society registration and tax exemption for donations.

Paranjoy Guha Thakurta, a journalist and film-maker well-known in India for documentaries like ‘Coal Curse’, said Greenpeace had found a way to hurt the Modi administration, and is being punished as a result.

“The government is targeting Greenpeace in an unfair manner because it is speaking out against certain environmental concerns, specifically what is happening in Singrauli,” he said.

“The government is also unhappy that Greenpeace is also opposing a major [coal mining] project in Australia which is set up by Adani group.”

At a press conference in New Delhi last week, civil society groups called on the prime minister to stop the crackdown on NGOs and begin a dialogue.

Modi missed their call. He was in China meeting Xi Jinping, discussing the two country’s new trade relationship and plans for this year’s UN climate summit in Paris.

In a statement the regional superpowers emphasised their desire to address global warming and invest in clean energy technologies.

“India is ready for business,” Modi said in a closing press conference in Beijing. Like China, that looks like a future without troublesome green groups slowing progress.

Note: Since this story was published, the Delhi High Court has issued notice to Home Ministry and several Indian banks (where the NGOs held accounts) calling on them to respond to a Writ petition filed by Greenpeace challenging the suspension of its license and freezing of its bank accounts without a court order.