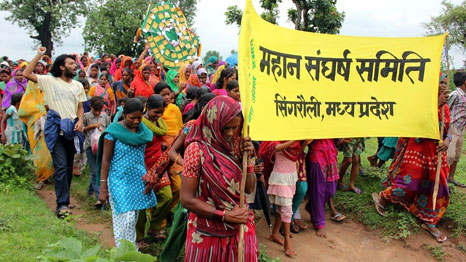 Greenpeace has accused the Indian government of trying to “intimidate and bully” its employees after an anti-coal campaigner was blocked from leaving India.

Priya Pillai, who had a valid visa, was to brief politicians on how a proposed coal mine in the Mahan forest, led by London-based company Essar, would damage the lives and livelihoods of villagers in the remote area of Madhya Pradesh.

But she was stopped by airport officials, and the word ‘OFFLOAD’ was stamped into her passport, despite being invited to Parliament by Labour MP Virendra Sharma.

“Such systematic excesses by the government are a shame and cause of worry for the Indian civil society. At a time when the whole world is making a strong pitch to safeguard freedom of speech and democratic rights, this action by the world’s largest democracy is problematic,” said Samit Aich, executive director of Greenpeace India.

“But I would only reiterate that such acts only make us more resolute to continue our campaigns on protecting Indian people and India’s environment.”

Pillai is currently on bail after taking part in a Mumbai protest against the coal mine, which Greenpeace have worked alongside locals to resist.

But she says that there were no conditions in her bail that prevented her from leaving the country, and has written to India’s Home Office and Ministry of External Affairs for clarification. She has no criminal convictions.

“Today my right to freedom of movement has been infringed and there was an attempt to treat me like a criminal,” said Pillai.

I was stopped at immigration, my passport stamped and told I was banned even though I have no criminal convictions pic.twitter.com/LzT3SXDbJb

When the world is supporting freedom of speech, why am I being stopped from sharing the situation in Mahan on an international stage?

The incident is the latest flare-up in an increasingly confrontational relationship between climate activists and India’s new government.

In September 2014, a UK Greenpeace campaigner, Ben Hargreaves, was refused entry to India.

This followed a government freeze on funds from Greenpeace International being transferred into the account of Greenpeace India, which amounts to about 40% of the organisation’s cash flow.

In December, a similar ban on international funding was imposed on the Indian branches of other green groups, including 350.org, Avaaz and Sierra Club.

Greenpeace India spokesperson Jagori Dhar told RTCC that this had limited the groups’ capacity to operate in the country. The group has challenged the ban, with a hearing due in Delhi’s High Court on 20 January.

Another Greenpeace India employee is awaiting the outcome of his visa application, but the organisation confirmed that it was now “highly unlikely” that Wednesday’s presentation would go ahead.

However, the group is looking into the possibility of addressing the British MPs over Skype.

MP Virendra Sharma said that the detention was a “worrying development”.

He said: “Democracy requires freedom to campaign, and freedom question the government. I’m proud of my Indian heritage, and that I was born in the world’s most populous democracy, but any undeserved detentions are a shameful stain on a nation.”