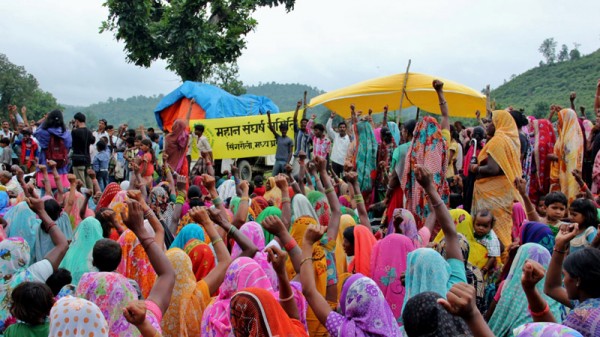 The indigenous communities of a forest in central India have reason to celebrate this spring. No more will they have to live with the fear of being booted out their land that faced the threat of being swallowed by a giant coal mine.

The tribal residents of Mahan forest in Madhya Pradesh can now look forward to gathering mahua fruits falling off trees and sell them to make a living. They stand vindicated, as Mahan will be not mined — for the time being.

After internal wrangling, the Ministry of Coal has given way to the Ministry of Environment, Forests and Climate Change. The Mahan coal block will not be auctioned, it confirmed in response to a Right to Information request from Greenpeace.

This, in simple words, means that the sensitive Mahan forests, home to one of the oldest forest communities, will be kept off-limits to mining.

Mahan in Madhya Pradesh is one of the oldest and largest sal forests in Asia. Spread across 1,600 hectares, this dense forests is home to over 50,000 indigenous people (dwelling in 54 villages) and several endangered wildlife species.

The news that Mahan will not be auctioned comes a week after the Delhi High Court ruled that the Government of India had illegally prevented Greenpeace campaigner Priya Pillai from travelling to the UK in January to brief British parliamentarians on the Mahan struggle.

In the now-famous “Priya Pillai offloading case” Indian government argued that Greenpeace’s intentions were “anti national” and that Pillai’s attempt to talk to a group of British MPs about the violations of a London-registered company Essar, could lead to cascading effects against India, including sanctions.

Pillai was not allowed to board her flight to London on 11 January, allegedly because her name figured on a “look-out circular” issued by Home Affairs Ministry. Her passport was stamped with the word “Offloaded”, barring her from leaving India.

The court criticised the government’s move as “undemocratic” and “muzzling freedom of speech” and ordered that the ban on her travel be lifted and her name be cleared from intelligence watch list.

In June 2014, the Intelligence Bureau had accused Greenpeace India of acting against “national interests” for, among other things, opposing mining in the Mahan coal block.

This report was then used to block access to funds from Greenpeace International, a move that was overturned by the Delhi High Court in January 2015. 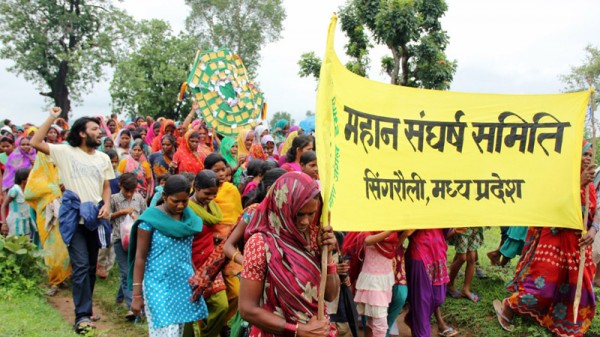 Local villagers have been opposing a new coal mine in the Mahan forests in central India (Pic: Avik Roy)

The protection of Mahan comes as a blow to Essar Energy, which had hoped to mine the forest to supply coal for its nearby power plant.

The block was allocated to a joint venture between Hindalco industries and Essar Power in 2006. It was to supply five million tonnes of coal every year for 14 years to a 1,000MW power plant of Essar and a 650MW aluminium project of Hindalco.

To the Mahan communities, the fight is about their rights. Under Indian law, they are entitled to a referendum on whether to allow the development.

They say these laws have been bypassed. Now, the government is reviewing major environmental laws, including the Forest Rights Act, that have been key in protecting forest dwellers.

Greenpeace India’s senior coal campaigner Priya Pillai said: “After being termed ‘anti-national’ by sections of this government, it is refreshing to see them accepting what Greenpeace and Mahan Sangharsh Samiti have been saying for years – this is a fabulous forest, home to endangered species and crucial to the livelihoods of thousands, and that is why it needs protection.”

Speaking from Amelia village in the Mahan forest, Bechanlal Shah of the MSS said: “Celebrations started as soon as we heard the news! The government has finally accepted that this forest, which gives thousands of us so much, must not be destroyed for the profit of a few.

“We will continue to fight for the recognition of our community rights over the forest, so that we never again face such a threat to our livelihoods. This is not the end of our struggle; it is the start of a new phase.”

However, there are many other coal blocks which fall under dense forest areas, which are being considered for mining. The environment ministry has recommended that only three blocks — Mahan, Marki Mangli II and Namchik-Namphuk — be considered off limits to mining out of the 74 blocks let out for auction.

Pillai said: “Even as we celebrate this win for thousands of Indians, we are painfully aware that Mahan is just one of hundreds of coal mines planned in forested India.

“The ministry’s current criteria for determining forests closed to mining is clearly inadequate, only serving the interests of mining corporations, ignoring the needs of the communities and wildlife that depend on our forests.”

In 2010, Ramesh crafted the no-go policy for coal mining to provide some predictability to the forest clearance process by listing in advance forests that were too good to be destroyed.

In July 2011, Ramesh said Mahan should not be cleared as it falls in “inviolate forests” category. That was upheld by the Forest Advisory Committee when they rejected forest clearance for mining in Mahan.

When Ramesh was replaced by Jayanthi Natarajan, she granted forest clearance to Mahan based on recommendations of a ministerial panel headed by President Pranab Mukherjee.

But while signing off Mahan, Natarajan observed that the only reason she granted clearance to Mahan was because of the investments in the region, which is under question as the Supreme Court had observed that huge investments could not be a ground for not scrapping the licence.

The coal ministry under Veerappa Moily in previous government went ahead and awarded forest clearance for Mahan in February 2014, bypassing some of the conditions prescribed by the ministerial panel.

The move was challenged at the National Green Tribunal and the case was set aside after the Supreme Court deemed the coal block allocation for 204 coal blocks as illegal in September 2014.

Mahan is indicative of how India will act when it comes to making key decisions about forests, conservation, community rights and a sustainable development.

India is under a lot of pressure globally to make strong commitments to tackling climate change, yet it is drawn to the cheap and immediate gains of coal despite the high social and environmental cost.