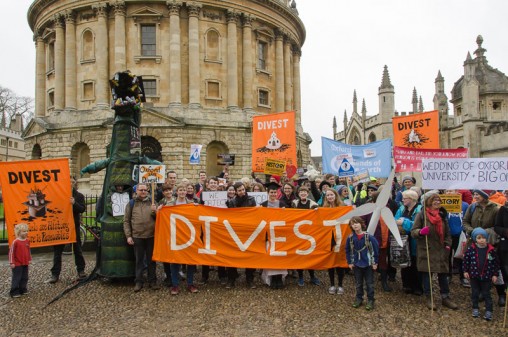 Oxford University has agreed to partially divest from fossil fuels, but not everyone is satisfied

Climate campaigners were divided on Monday after Oxford University agreed to avoid direct investment in coal and tar sands from its £2.8 billion endowment.

The hallowed academic institution, attended by many world leaders, said in a statement it has no direct coal or tar sands holdings at present and plans to “maintain this position”.

“Today it has offered great leadership on the crisis of our time,” he said.

But 70 alumni – including journalist George Monbiot and solar entrepreneur Jeremy Leggett – are handing back their degrees in protest at the policy, which they say does not go far enough.

”The university has taken a step forward, but not a big enough one,” said Sunniva Taylor. “I, with others, have decided to hand back my degree, in protest.”

Scientists estimate more than 80% of oil, a half of gas and a third of coal must stay in the ground to avoid catastrophic climate change.

Divestment campaigners argue it is morally wrong to finance destruction of the climate. They aim to stigmatise fossil fuel companies using the same tactics deployed against tobacco and South African firms under apartheid.

In agreeing to partial divestment, the university accepted there was an ethical case for withdrawing cash from the most climate polluting fuels.

Philosophy lecturer Felix Pinkert said: “By excluding investments in coal and tar-sands extraction, the University of Oxford demonstrates that universities can carry out their academic mission while also acting with moral integrity in their investment choices.”

Oxford University’s Smith School is leading research on the fossil fuel assets that will be “stranded” by curbs on greenhouse gas emissions.

Coal is the most polluting fossil fuel, making it a top target for divestment. Within the oil sector, tar sands are particularly carbon-intensive and costly to exploit.

The university has agreed to divest from companies that get more than 10% of their production from either source.

That allows it to continue investing in firms like BP and Shell, which get a lesser proportion of fuel from tar sands.

Andrew Taylor, fossil free campaigns manager at People & Planet, said: “Tar sands need to be kept in the ground and universities should divest from any company digging them out.

“If you live in the shadow of tar sand extraction and your baby’s been airlifted to hospital after drinking the water after a spill, it doesn’t matter if under 10% of the culprit’s production comes from tar sands.”

And the university refused to disclose its investment portfolio in future.

Cara Turton-Chambers, student campaigner, said: “While we are pleased with today’s results, we as students feel that transparency is an issue within the university structures.”

Some 200 organisations worldwide with assets of US$50 billion have committed to full or partial fossil fuel divestment.