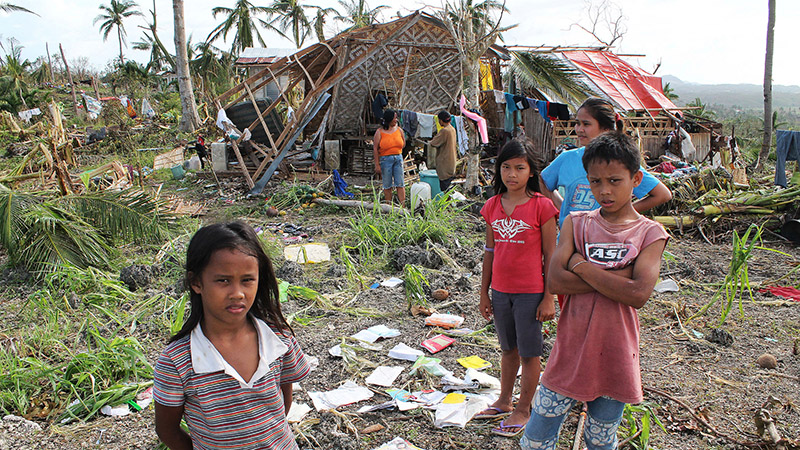 Children and the remains of their school after Typhoon Haiyan hit the Philippines in 2013 (Pic: EU Commission/Flickr)

The energy and consumer products sectors are most exposed to future shocks, analysts say in a report focusing on the impact of natural disasters on businesses.

The effect of disasters on corporate credit quality could “increase considerably” if predictions by climate scientists are proved correct, says the report.

“Therefore, we see improvements in companies’ disclosure about their exposure to natural catastrophes becoming more relevant to our ratings analysis.”

Floods, droughts, tropical storms and earthquakes are factors in 60 negative rating actions since 2005, says S&P, compared to 6,300 downgrades over the same period.

Current levels of catastrophe insurance and disaster risk management are likely to be inadequate if droughts, floods, heatwaves and rising sea levels increase as a result of greenhouse gas emissions.

In over 40% of cases a natural disaster led to a one-notch downgrade.

“We consider that the international community as a whole will need to improve the resilience of the global economy to natural disasters so that their impact on companies is manageable,” say analysts.

“Climate change will in our opinion only add to this challenge.”

The report builds on research already released by S&P, which has taken an increased interest in climate change and related extreme events since 2010.

Last year it identified Vietnam, Bangladesh and Senegal as the three countries most at risk from global warming. Others deemed in danger included Indonesia, Nigeria and Fiji.

As the probability and cost of natural catastrophes events increases some risks would become more difficult to insure, this year’s report says.

But he said there are no plans as yet to include climate impacts into the wider ratings process, as it’s still hard to measure material impacts or work out the risks over a specific timeline.

“If we are to demonstrate materiality within a 3-5 year horizon we need to have quantifiable evidence,” he said.

Wilkins described climate risk as a “slow burner”, but citing 2014 research from the UN’s IPCC science panel said increases in risk were likely to be significant.

A planned UN climate pact – due to be signed off by nearly 200 countries later this year – should ensure more transparency on potential risks, which would help investors, he said.