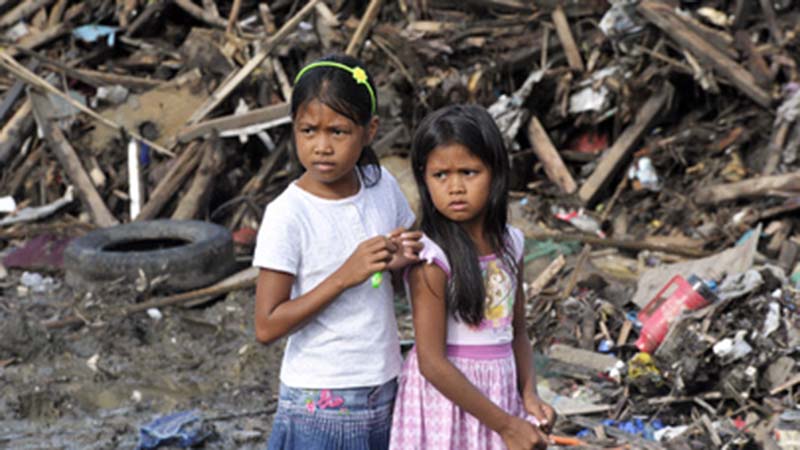 Two girls from Tacloban, Philippines stand in front of the damage left by Typhoon Haiyan in 2013 (UN photos)

A score of developing nations reeling from an overheating planet have urged the UN’s climate change body to lower the ceiling by which the world can warm.

Members of the Climate Vulnerable Forum meeting in the Philippines last Thursday called on a tightening of the temperature goal, currently agreed at 2C rise on pre-industrial levels.

Beyond the 2C threshold, scientists warn of increasingly drastic effects including rising sea levels and increased risk of extreme weather. But studies show even a 1.5C rise will have significant impacts on some parts of the world.

Negotiating blocs at UN talks the Africa Group, Least Developed Countries and the Alliance of Small Island States have long campaigned for a 1.5C limit.

“The reports underscore just how much difference even half a degree of additional heat makes for people’s lives, for working conditions and the movement of people,” the Philippines top representative at the UN talks, Mary Ann Lucille Sering, said.

“How can we possibly subscribe to more than double current warming given what less than 1C has entailed?”

UN special rapporteur for human rights and the environment and writer of one study, John Knox, said: “Even moving from one to two degrees of warming negatively affects the full enjoyment of a wide range of human rights,” such as health, food, water and housing.

“Policymakers need to be made aware, in particular, of the significant negative repercussions of more hot hours and hot days on workforce productivity and therefore also GDP,” said author Tord Kjellstrom.

“Tropical countries are worst affected, including most of the member states of the Climate Vulnerable Forum.”

Global temperatures have risen 0.85C since the Industrial Revolution, according to the UN’s climate science bureau, the IPCC.

And despite efforts to curb greenhouse gas emissions, countries are some way off track for the 2C goal.

The world can only emit a maximum 44 billion tonnes of carbon dioxide equivalent a year in 2030 to have a 50-66% chance of meeting that target, a report by the Grantham Institute said on Monday.

Achieving near-zero emissions in the second half of this century is key to the December summit in Paris, UN climate chief Christiana Figueres said in February at the close of UN climate talks in Geneva.

The US, China and the EU, the world’s top three emitters, will release some 22 billion tonnes annually by that date under published climate plans, depending on the year China’s peaks its emissions. The rest of world is on track to emit an additional 35 billion tonnes, it found, clearing outstripping the target.

Lead author Nicholas Stern called for countries to ramp up ambition before December, when they are set to strike a global climate pact in Paris.

The report made four recommendations, including a mechanism to review country pledges, boosts to clean energy investment and a transparent base for pledges.